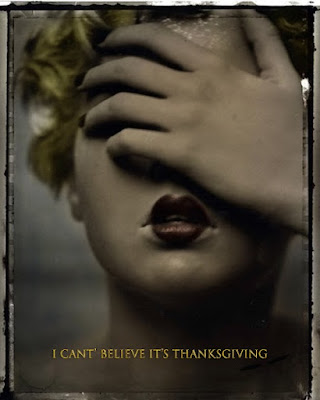 God. . . I wish I had taken that photo.  Sarah Moon, one of my favorite photographers, did.  Only her photo is in black and white.  Not quite.  It is the color of old Polaroid 55 P/N film.  I hand colored it years ago.  Then I posted it.  Then it began to make its rounds on the internet.  I don't think people knew what I had done.  It is a great job, I think, better than the original.  I should be paid for my work but I'm more likely to be sued.  But I love the photograph--especially my criminal version.

I can't believe it is Thanksgiving.  Nope.  Though the weather took a turn yesterday.  It is c-o-l-d in the Sunshine State.  Whenever it dips into the forties here, it is cold.  The weather does, however, make it seem like the holidays.  You can never tell about the weather here in November.  It could be ninety in a few days time.  Today, though, the dogs will be frisky.

Poor Kit-Kat.  She will suffer another winter outdoors just as she suffers summers.  As she has for years.  Of course it is o.k.  That is what animals do.  But I can tell she is getting older.  She sits by my kitchen door often now.  She can feel the air, I guess, and smell the food.  Silly girl.

That old story about the wolf at the door.  It's the young ones that turn their nose up at free food and a warm bed at the cost of liberty.  The old ones think about it a bit more, I'd imagine, though it probably depends on who is offering.

So, feeling frisky myself, I did extra minutes extra hard on the treadmill, bike, and elliptical at the gym.  Don't worry.  It was not Olympian.  I'm still working my way back from Covid.  But it was a good workout.  After showering, I headed out for lunch.  I don't go much any more, but you know, with the weather and all. . . .  But like every social media idiot, my food wouldn't have been as good if I did not share photos of it.  Why?  Beats me, other than my photos are spectacular. 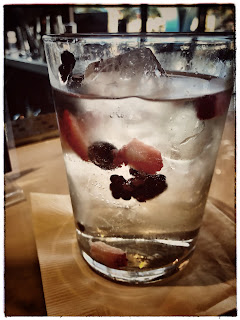 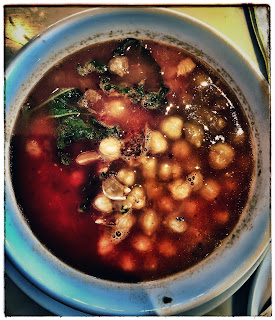 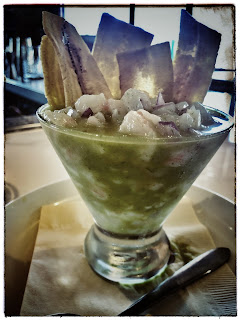 What else was I going to do sitting with food alone at the bar?  I began taking notes about what was going on around me, you know, observation with commentary.  I sent them to my vacationing friend in Key West thinking they would make their way verbatim into today's post.  When I read them this morning, though, I knew I couldn't put them here.  Too many of you would be offended.  Of course, that is what makes them so damn interesting to me, but times being what they are, you know. . . .

If you see dear Mrs. Equitone,
Tell her I bring the horoscope myself:
One must be so careful these days.

One must be careful these days, indeed!
Having eaten and drunk (sounds weird, right?), I headed out into the perfect day to run errands.  First to the car wash, then to the grocers.  But I was quickly running out of steam.  Something felt wrong.  I was was suddenly supernaturally tired, limbs heavy, movements slow.  At the grocery store, I forgot why I'd come.  I picked up some things, none of which were essential.  What was it?  What was I forgetting?
I staggered into the parking lot with my few items, but the grocery store reminded me that Thanksgiving was just around the corner.  The store had signs saying it would be closed Thanksgiving Day.  For a weekday afternoon, the store was packed with shoppers.  I thought I'd better get to the liquor store while I was out.
I was like a punch drunk fighter, though, when I staggered into the house.  Nothing needed refrigerating.  I just dropped the bags on the floor and went to lie down in bed.
An hour and a half later, I opened my eyes.  The light was low.  I looked at the clock.  Shit.  I couldn't wake up.  I fell back into a fitful sleep.  I had to get up.  I couldn't.  I should be at my mother's by now.
I forced my way out of bed.  It was time to feed the cat.  Both of them were on the deck.  Goddamnit!--THAT is what I needed to get at the grocery store.  Cat food.  I shook the bag.  There were crumbs.  What to do?  I opened a can of chicken and poured the juice into the cat food crumbs and scraped a little chicken in as well.  Tuna juice was a thing Ili taught me about.  I never knew that cats went crazy for the packing water.  But they do.  Boy oh boy do they.  So I set the bowl down and looked at the neighbor's cat.  He looked back.
"Sorry, buddy.  I'm sorry.  I don't have anything for you today."
You could tell his feelings were hurt.  Meanwhile, old Kit-Kat went at dinner like a baby tiger, lapping up chicken juice like a shop vac.  I went in and poured a whiskey and lit a cheroot.  I grabbed my phone and staggered out to sit on the deck and call my mother.  It was cold. 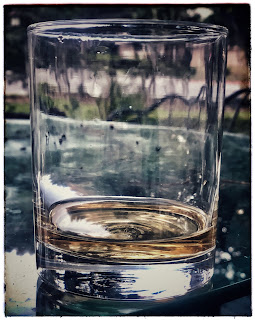 "Hey, ma. . . I won't be over tonight."
"Why?  What's wrong."
You see, that is my life--and hers.  I am expected every evening.
I explained the situation.  Sure.  She understood.  She began detailing her maladies of the day.  She did not know why she felt bad.  She gave me some possibilities.  Maybe it was bad soy milk.  Maybe it was the neighbor's dog we were petting the day before.  I had made much about how dirty the dog was, how much it shed, what algae and fungus and who knows what must be living in that plush but never groomed fur.  It terrified me, I had said.  Now she wondered.  Maybe it was that.
Neighbors walked by in fleece and down parkas.  It was only 55 degrees, but the sudden drop and the high humidity. . . well, you can't explain it, but the chill goes right to your bones.  I went inside and got my own down sweater.  I poured another whiskey.  The sun was going down.  The whiskey seemed to make me feel better.  All I wanted to do was sit and drink whiskey all night long.  I wished for a big cigar.  I was feeling like T. Williams' Big Daddy.
Eventually, the cold drove me in.  I wasn't hungry for dinner.  I would simply snack.  Olives, cheese and crackers.  I opened a bottle of wine.  I watched The Troubles of Our Time for a bit, then made a salad from the rest of the big can of chicken I had opened.  I turned off the television.  I put on my iTunes playlist that surprises me sometimes when its algorithms get it right.  I heard this one play.

I tried to find a version on the internet I could send to my friends, but there wasn't one.  What to do?  Well. . . here it is.  What a song.  I listened to it about a hundred times.  I am listening to it now.  The Haden Triplets.  My god. . . they are more than great.  They are practically immortal.  If you want more. . . (link).

With the wine and the whiskey and the long afternoon nap, I got manic and stayed up too late.  One hit off the peace pipe to settle me down. . . and a good night's sleep.

I woke with the sun.  When I got up to start the coffee pot, both cats were waiting on the deck.  Shit!  What to do?  I got an egg and cracked it into a bowl.  I poured in a little milk and whipped them up like I was making scrambled eggs.  I put the concoction in the microwave for thirty seconds.  Some solids had just begun to form.  I whipped it more to make sure it was cooled down and took it out.  Once again, the neighbor's cat looked stunned.  Nothing for him?  Meanwhile, Kit-Kat went at the egg and milk combo with a real gusto.  I guess she was hungry after a cold night.

I feel fine this morning. I don't know what went wrong yesterday.  Maybe I have Long Covid.  It could be. Whatever it was, it hit me like a wrecking ball.  But drink and music and a good night's sleep has brought me back to life.  At least for now.  But as you well know, if not. . . well, there's always tomorrow.