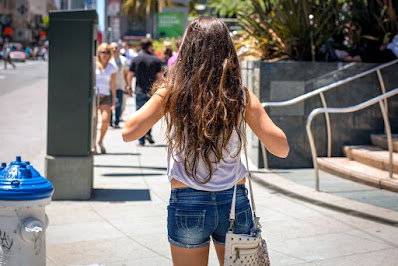 I just love a girl who flashes a crowd, don't you?  Do it when you're young, though.  It is much more palatable.  That's what I think, anyway, having a mirror and all.  Maybe I'll show you a picture of me in a speedo on a beach in Key West from back when.  I might show you that.  I wouldn't show you a photo of me on a beach in Key West now.  Not unless I was wearing a Muumuu.  Young bodies are so casual.  Old bodies are anything but.  The funniest thing is that when you are young, you are always concerned, even worried, that there is something wrong with your looks.  You wish you were taller, just a few inches, or that your legs were longer or your shoulders broader or that you had abs like your roommate.  Etc.  When I got out of college and began working at the factory, other people I knew were working too, of course.  I knew a couple hippie girls who were masseuses.  They said they would give me free massages if I came in.  I never went.  I was paranoid, really.  I thought I was too fat.  I wasn't too fat.  I can see that for certain now that I am too fat.  Selavy.

What I needed was braces and a nose job.

But hey. . . how'd this get to be about me and my deficits.  It's bullshit.  I went skinny dipping with the girls in Key West even with my "shortcomings." Ha!  I stole that line from Brando.

Is there anything more intriguing than youth though?  I mean, you don't have to ask Jeffery Epstein.  It's everywhere.  I think it's called advertising.  Unless you watch television with my mother.  Then it is all about taking drugs so you can do something you used to do when you were young.  "Look, ma. . . that fellow can pee again!"  There's a drug for everything.  They let people play golf and look after their grandkids and even make love to their wives again.  But, as they say, you shouldn't take drugs if you are allergic to them.

I've read that the average number of prescription drugs people over 65 take is 15.  Average!  I guess this is the result of the hippie drug generation.  They believed in better living through chemistry.  That's what the posters said, anyway.  And I guess that is the reason drug companies advertise.  It is a tough one to figure. What do they have to gain by advertising a drug that takes a prescription?  It is not like doctors are watching television and suddenly realize they should be prescribing more Ritalin.  "Ask your doctor if fentanyl is right for you."  Nope, that ain't the reason, either.  It has to be that drug companies just want to normalize the practice.  They are pushers, essentially, but nobody says it.

Last night after seeing my mother, I had to go to the drugstore.  I asked the woman at the drug counter how many different drugs they had in the store.  She looked at me for a moment like I was sizing up the place for a big heist.

"That's an interesting question," she said.  "I've never been asked that before."

"There must be a lot of S.K.Us in there.  Kinda like a hardware store."

"I've read that the average number of prescription drugs a person over 65 takes is 15," I said incredulously.  That seemed right to her.

I didn't mention that people are living almost twice as long now as they were in the beginning of the 20th century.

Obviously, there is a fortune to be made off of old people.  Maybe I should try to get into one of those commercials.  But, just as when I was a young man, I'm afraid that I am too fat.  Besides, all those t.v. old people have had some work done.  They all look seventy-teen.

The world is only infatuated with you when you are young.  At least physically.  Unless you are the Rock, I guess.  People seem to love that 'roided look.  Better living through chemistry, indeed.  He should be a villain rather than a Disney toy, but that's the world we live in.  It's good to be jacked, especially when you are turning 50.

But you know what they say, Dwayne.  Everybody loves a puppy. 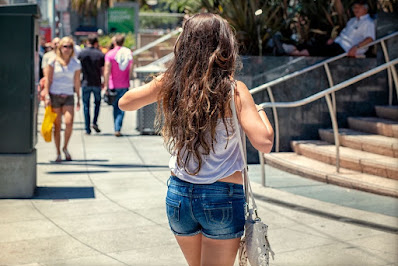