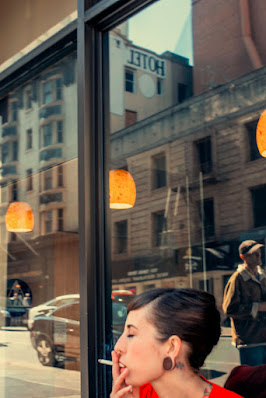 I haven't taken a photo for months now, not since I got sick with Covid.  I was on a roll then, reaching out, making contacts, experimenting with new things.  Since then, I've not had the energy to work.  It is sad and awful, really.  I have four cameras loaded with black and white film that I've been trying to finish off for weeks, but I haven't taken more than a couple useless pictures.  I don't think it is mental.  There is a mental component.  I might be depressed, but who isn't?  But I haven't much energy after about noon.  I'm like an old iPhone that won't keep a charge for more than a few hours.  It confuses me and then the mental thing comes about.  How will I make my life better if all I can manage to do is sit on the couch?  As my brain tries to wrap itself around the phenomenon, it, too, becomes enervated.

I haven't a creative idea.

I keep looking at articles touting psychedelics as a treatment for depression.  Cary Grant says LSD saved his life.  For years before it was illegal, they successfully treated alcoholics with LSD.  That all sounds good to me, but I grew up in the hippie drug era, and I've seen lots of friends who were altered in ways not so enviable. On the other hand, I was friends for awhile with a incredibly beautiful fellow who was the first Crest boy in t.v. commercials to get whatever percent fewer cavities.  He was signed by Hollywood and given all the etiquette classes, horseback riding classes, acting classes, etc.  He was presumed to be a would-be star.  But it was too much, he said.  He dropped out and went to Mexico.  He said he sat on the beach and did hallucinogens every day for a year.  He was still "here."  Why hadn't he turned out like my hippie friends?

A fellow at the gym asked me the other day how many times I have tripped in my life.  I looked at him with a bit of shock.  "None," I said.  This has always been a bit of an embarrassment in truth.  I always felt that it was like saying you had never had sex.  "I was always afraid I wouldn't come back right," I told him.

Today in the Times, I read an article about people who have "not come back right."

I've been tempted, of course.  When we are young, we say, "When I get old, I'm going to take acid, smoke dope, shoot heroin. . . whatever.  What the hell will I be saving myself for?"

But most of us, when we get old, don't.  It is a great disappointment when your friends don't do what they say they were going to do, of course.  I have a dear Black friend who told me that when she retired, she was going to cut her hair short and bleach it platinum blonde and smoke dope every day.  She didn't, of course.  Shit happens.  Her health worsened.  But I am still quite disappointed.

I was disappointed and relieved.  It was like having the number of a sex worker in your bedside table.  Some nights, you know. . . the temptation is there.

I know a tattoo wouldn't make me happy.  Maybe a nipple ring.  Just kidding about that, but you know, that's the sort of thing people try to make themselves happier.  I'm more likely to go to a yoga retreat.

Today, I'm determined to finish off those rolls of film so I can process them.  I think that I will get into the car and drive to a marginal part of town, park and walk, all before the criminals arise.  That was my plan last night, anyway.  I woke up to the coldest morning we've had so far this year.  It makes the comfort of coffee and heat so nice.  But I know I need to move.  If I can break through the catatonia, I will feel better.  That, at least, is the theory.

What I should do is go to Home Depot, by a screw gun and a circular saw and start taking apart my deck.  I can take the deck apart by myself.  Taking it apart would force me to fix it. . . I think.

The thought of it depresses me.  There is so much to do around here.

My circles shrink.  I become increasingly isolated.  It gets harder.  I'm not the desirable boy I used to be.  Then I could just step out the door and see what happened.  There are reasons old people don't like to go out the way they used to, and it isn't all fatigue.