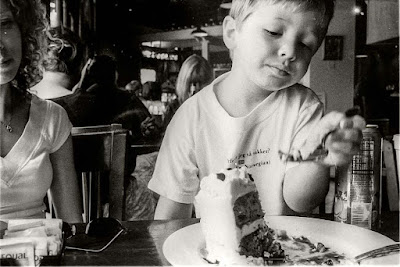 Another early morning, another rainy day.  When I was a kid, this was by far the best time of year.  The air fairly hummed with excitement day and night.  And there was football.  We played it constantly, either touch in the street or tackle in somebody's backyard.  We wore jerseys, if we had one, with our favorite player's number drawn on.  The footballs were usually a bit deflated, softer than regulation.  Early Sunday mornings, however, were torturous as most of us were not allowed out of the house to play until after church.  Some of us went to church and some of us didn't, but there was still the unwritten rule that you didn't go to another person's house until the afternoon.  Sometimes we went to church.  It was horrible.  Nothing about it made me happy.  But mostly we didn't.  Sunday morning t.v. was not kid stuff, so I relied on the sports page and the giant color cartoon section of the Sunday paper for entertainment.  The cartoon page was only in color on Sundays.

Of course, I was more interested in the sports page.  There were photographs of the big college games, runners slipping through a gap in the line or throwing a stiff arm or plunging over a tackle into the end zone.  There were photos of quarterbacks standing heroically tall against a charging defense or faking a handoff and hiding the ball to confuse the defense.  There were photos of receivers making impossible one handed grabs, touching a foot down in bounds, body extended beyond belief.  The photos would turn into mental movies and I would finish the play in my imagination, feeling the bodies collide, hearing the crowd.

Cartoons were always strange to me.  There was no Superman or Batman or Flash or any of the superheroes.  There was "Nancy," about a strange little girl.  I could never figure out what that was supposed to be about.  There was "Snuffy Smith," a cartoon about a bunch of hillbillies.  I was never crazy about that one, either.  Some, like "Moon Mullins" were just goofy.  There were the "serious" cartoons like "Steve Canyon" and "Terry and the Pirates."  "Little Orphan Annie" never interested me, nor did the political cartoon, "Pogo."  As a kid, I never dreamed of being a soldier, and perhaps "Beetle Bailey" helped to seal that deal.  "Peanuts" was o.k. though not so very ornate.  I would save for last the only one I had any real interest at all, though I never fully took to it.  "The Phantom" kind of freaked me out.  He wasn't a superhero, but he wore a costume.  He had no super powers whatsoever.  He was sort of like Batman, I guess, but weirder.  Ultimately, the cartoon page was just a giant color phantasmagoria.

There was nothing else to do otherwise but eat cinnamon buns and drink milk and rub my Silly Putty onto the cheap newspaper images to lift the ink.  God knows what terrible chemicals were in that stuff (link).  Getting antsy, I might toss my football from hand to hand or maybe run through pretend tacklers (in slow motion, of course, so I wouldn't get into trouble) until I crossed the threshold of the kitchen.

By noon, the state university college football highlight shows would air, so there was that.  Old Lantern Jawed Coach Ray Graves would tell us how well the boys played in defeat in front of the hometown crowd, and the highlights led us to believe they had really won.  Somehow, though, the final score never reflected the highlights of the day.

Finally, allowed to go play, I'd meet up with the boys for a pickup game.  Sometimes the games were only two on two, but usually we'd have enough to make it seem that we had real teams.  And then we'd head home for late lunches and NFL football, dirty, sweaty, stinky.  We'd watch the games with our dads.  Mine usually fell asleep in his recliner, but that was o.k.  When the game was over, we all would meet up once again to play until dinner.  Dusk came early and brought the whistles that signaled it was time to come home.  Every dad had his own style of whistling, and when one of us heard his, there was the quick, "That's my dad.  I gotta go," and then one by one, we'd each hear our own and answer with the shouted, "Coming."

Sunday dinners could be anything from grilled cheese sandwiches and tomato soup to wieners in sauerkraut.  Sometimes my mother made a roast with potatoes and onions and carrots.  I hated the carrots cooked and cried that I would eat a raw carrot but I couldn't eat them cooked.  My pleas, however, would fall on deaf ears, and I would miserably swallow those on my plate without chewing to minimize the anguish.

After dinner, I would be forced to bathe, after which I would put on my pajamas and join the family in front of the t.v. for "The Ed Sullivan Show" and "Bonanza."  But "Bonanza" was technically past my bedtime, and I didn't much enjoy it anyway, and before long I was in bed.

None of that will happen today.  Well. . . Sunday dinner with mom, of course.

I wonder what the kid in the photograph remembers as his childhood.  He turned twenty-two this week,  I don't know him any more, so it will remain a mystery to me.

Time is a bandit, but in the end, it is what remains.