The Amalgam of the Day

It is going to be messy writing today, I know.  When I sit down with the computer in the morning, I have things in my head but no plan.  Sometimes they gel.  Often they don't.  But writing today seems fraught with danger.  I've been dreaming again.

I have to admit that I am a bit frightened that I am becoming dependent on sleep aids.  Not like you think, probably.  But I realized that I had taken many different things before bed for awhile.  One night it might be Tylenol, the next an Advil PM.  I am pretty sure I have developed some allergies, so my mother gave me pills for that.  Those knock me the fuck out.  Once in a great while I'll take a hit off the old peace pipe.  And then there is the occasional Xanax.

So. . . last night I went to bed cold turkey.  Let's just see, I thought, what happens.  As expected, I felt like I'd been sleeping all night when I woke at 12:30.  A glance at the clock was heartbreaking.  And then again at 2:30.  But I was sleepy and didn't let the waking bother me, and then I began to remember what I had been dreaming.  And the dream was good.  Very, very good.  I once dated a true beauty.  More than once, but this one was special.  She had the softest lips I'd ever felt.  Her tongue was magic.  Her whole body transformed when she kissed.  I'd never experienced anything like her before.  And yes, I loved her.  And though I think of her from time to time, in my waking mind, I don't recall the actual experience of kissing her, but in my dream, it wasn't cognitive, it was total emersion.  No matter how many times I woke, I fell right back into the dream.  It got crazy and did not, in the end, match anything that actually happened, but that is of little matter.  The dreaming was pleasant.  And although I woke up every two hours or so, I stayed in bed a long time.

So. . . the question of whether I have become dependent on various medicines becomes rather moot.  Now, however, I am a bit worried about my mental state.

Perhaps, however, my dreams were a reaction to the deep betrayal I experienced yesterday.  You know how it goes.  Someone tells you something you are not supposed to tell but it effects you so much that you feel the need to tell someone who is not involved in any of it, then, weeks later, you get a call from someone saying that the person you told told her that very thing.  And the situation worsens from there.

So yea, maybe my unconscious was helping me make a correction there.  I don't know.  I probably need a spirit guide. . . a life counselor.  All the latest studies, though, are showing positive results from taking LSD or Ketamine.  If the economy keeps going in the current direction, we'll all be using.

Other than the deep and hurtful betrayal that came late in the day, however, I had a moment of fun.  I went to a photo gallery to see a show.  Did I say fun?  It wasn't fun.  The main hall was given to the photographs of a local photojournalist who has worked at the local paper for forty some years.  It was like looking at the newspaper without print.  In one of the other halls, though, part of the exhibit presented some work by Lauren Mitchell.  She photographs in my own backyard.  I've seen her work before.  She pisses me off.  I mean, she is really good. 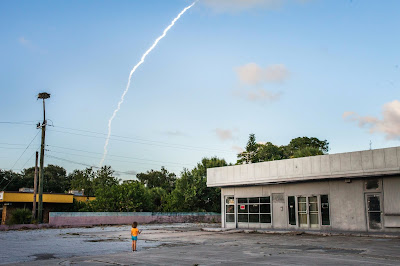 I hadn't been downtown in a long while, and it appeared that things were beginning to hop again.  New shops.  New restaurants.  It looked exciting.  I spotted a Ramen shop I might go back and try today, but today is not like yesterday with its perfect blue sky and diamond sharp sunlight.  It is gray today and uninspiring.

I am going to see "The French Dispatch" tonight with a friend from the factory.  It scares the shit out of me to tell the truth.  I am supposed to be super immune, but being in a closed room for two hours with strangers is daunting.  All I can do is order supreme nachos and beer and try to keep calm.  I swear, though, I have become a fan of watching movies at home.

I've looked at Lauren Mitchell's site.  She is a young mother which gives her access to things I haven't.  And, of course, as an exhibiting artist, she limits her work to thirty or so images.  Could I make a decent website if I chose thirty images rather than posting three hundred or so a year?  I took a look at her Instagram.  I think I could.  And maybe. . . .