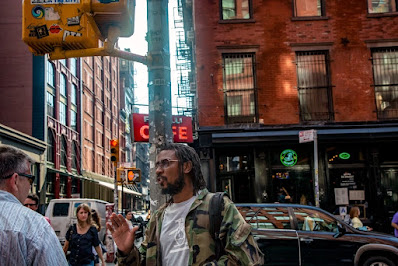 Again, I took nothing to sleep.  I didn't wake until 3:30.  From that point on, I was dreaming without sleeping.  It was odd.  I'm sure I was awake, but I wasn't in control.  It was alternately wonderful and agonizing.

My day had been a strange one, too.  I am trying to normalize, trying to do what my friends urge, to get out and about and enjoy my retirement.  But I had a call from one of the floor bosses at the factory just as I was getting out of the house.  He wanted to run a problem by me.  That took about an hour, and then I didn't want to go to the gym any more, so I took a long walk and stretched for a long time when I got home.  Showered and ready for the day.

I was hungry, so I headed downtown to the little Ramen shop I had spied the day before.  Out of my little village and to the big city.  It is a different crowd, more urban, hipper, younger.  I felt odd.  I felt old and fat.  For some reason, my timing was completely off.  I have forgotten how to move.  I emitted awkwardness.  A pretty young woman walked in.  She looked at me as if I were a potential rapist.  O.K.  I can hear the moans from some of you.  I wasn't looking at her.  I wasn't gawking.  But her table was sideways just in front of mine, so it was impossible not to see her.  Every few moments, she would pop a sideways glance.  My arms felt out of proportion.  My face would not rest.  I wished she would leave me alone, change tables, just get up and leave.  I texted Q.  He said to take my hands out of my pockets, that that made people nervous.  Good advice, I guess.

I must say, though, the food was good. 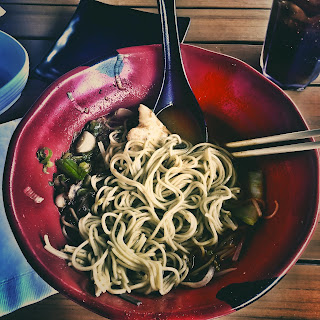 When I left the noodle shop, I walked around a bit.  I had my camera, but it pretty much stayed in the bag. I don't know, man. . . I just felt odd.  And by the time I got around a big city block, I realized I had to get home and get ready.  I needed to be at the theater by five.  But first, I had a craving. 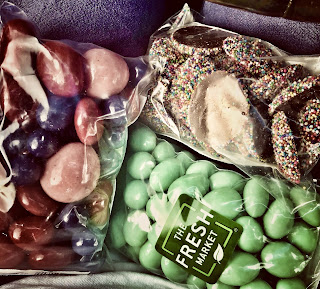 It was wrong.  I know that it was wrong.  But I was bloated with Ramen noodles and had already planned to have supreme nachos and beer at the theater, so I figured my diet was blown anyway.  I stopped at The Fresh Market.  This is all I bought.

Back home, the cat was waiting for me on the deck, so I poured a scotch to help me move the noodles through my gut and gave her a bowl of food. 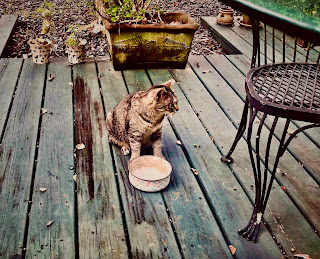 What the fuck was atb?  Oh. . . at the bar!  I needed to get myself together, but I haven't done that for two years now, so I just stuck with my shabby shorts and t-shirt, grabbed my keys, and headed into the impossible home-from-work traffic.

Everyone at the outside bar was young.  The bartender was a handsome lad with a youthful cockiness and loose jointed, unconscious movements that pissed me off.  Again, as earlier, I had forgotten how to move.  Nothing I did was natural.  I felt robotic.  What happened in these past two years other than that I have grown fat and arthritic?  Had I finally become Prufrock, good only for swelling a crowd?

I won't give you a movie review.  I'll just say that Anderson knows his art as well or better than anyone.  He is in control of every element.  And having said that, I assume he was making a statement by including female nudity in this film.  He has never done that before, and times being what they are. . . I have to give him the Big Balls in Cowtown award 'cause he is sure to get some flack for that.  Hell, he may get cancelled.

When the film ended, my friend said a quick goodbye.  It was weird.  There was no chat, just a rapid "we have to do this again sometime" handshake and a quick spin on the heels.  Had I farted?  Did I double dip in our two orders of supreme nachos?  Was I rubbing myself during the nude scenes?

Man, it had just been that kind of day.

Back home, I poured a scotch and reached for a cheroot, but the cheroots were gone.  I remembered I had a pipe and some tobacco, though. . . what?  Sure.  Don't you?  I know how to properly pack, tamp, and smoke a pipe.  I know how to draw and keep it from getting too hot.  And on the deck in the cool of the evening, alone with the moon and the clouds and the stars, it was better than a cigar.  Scotch and a pipe.

But it was fine to sit in the night alone and reflect on my aloneness and all the days I have spent alone and that most days I do not speak to another human until I go to my mother's house.  And therein, surely, lies some if not more of the reason for my strangeness in the crowd.  It will be difficult for you to understand.  You do not realize how much human interaction you have in a day and what a difference it makes to have none.  I've realized it now.

So. . . I am going to have to refurbish my wardrobe and get out more.  Nothing radical.  You know, jeans, t-shirt, jacket.  Shoes of some sort.  A hippie woven bracelet?  Too much?  I have cool glasses.  I don't know.  Maybe I should do a full Bill Murray.

But more than all of that, I need to restore some confidence.  My lack of self-esteem is dismaying.  I've become a punching bag even for my friends.

My ex-wife used to tell me I revealed too much.  Maybe she was right.