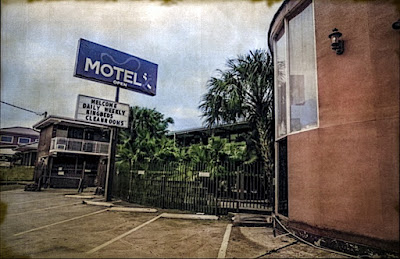 See my photo of the MotelX in the daytime?  Here it is at night (link).

Did I think a Sunday afternoon looked dangerous?  Friday night at the old MotelX.

Friday night.  It caught me unawares.

I scanned another roll of film.  It is a cheaper film, a good film.  I like it very much.  It was  the first roll of the film that I had shot and developed.  It lies flat, scans well.  I will order more today.  Maybe I will keep shooting film after all.  I discovered a new way to scan film on the better scanner.  The scans come out faster and better than any I have ever done before.  Very good scans.  Good old film.

Still, it takes a long time.  It is a day's work.  And in the end, I often end up with nothing of importance, nothing of interest.

The Jeffery Epstein trial of Ghislane Maxwell has gotten bizarre.  How could it not?  But prosecutors are introducing as evidence of wrongdoing the very things that most of you have at home.  It doesn't end here.  It is only a beginning.  The trial is pornography for the sexually oppressed/repressed.  Grab your socks and hold onto your cocks, friends.  It is far from over.

If you had a monster child who shot up a school and killed some kids, what would you do?  Would you run away and hide in a warehouse?

I know I had more to write, but I am up in the very dark with a pain in my hip that is searing.  The coffee pot is already empty.  My plan was to go back to bed at dawn, but dawn is still far away.  Music sounding strange to these western ears pulses in the background (link).  It is hypnotic.  I'm hoping it will distract me from the pain.  Perhaps, but it distracts me from whatever thoughts I had before rising as well.

I am anxious without obvious cause.  Perhaps it is simply the senseless passing of time.  Just watching the account run dry.