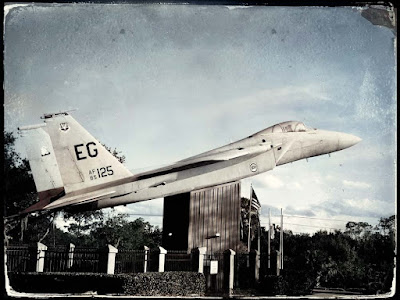 I need to get out of the house and on the road today.  It is the only way to see the strangeness of the physical world.  This jet was in a park across the road from the springs I visited.  I saw it as I was leaving. A memorial park, neatly kept, picnic tables, some plaques.  I'm sure the place was never frequented.  I stopped and took photos.  I haven't developed the film yet nor downloaded anything from my digital cameras.  I took this with my phone, then jacked it up a bit, just as I did with the photo I posted a few days ago of the river and tree at the spring.  I loved that one so and sent it around to some friends.  One who has recently moved from the state into a colder northland said she loved it and wanted to buy a print to hang on her wall.  I wondered how a phone pic would print.  Yesterday I downloaded it to my computer and gave it a go.  16"x16".  I hadn't much hope, but to my great and tremendous surprise, it looks wonderful.  How can that be?  I don't understand it.  I took the photograph with my cell phone and used phone apps for tweaking it in postproduction.  I thought it would be too low resolution to print that big.

Now I'm thinking. . . do I really need cameras?  The drummer from the old band was an MFA photographer from the University of San Francisco.  He told me recently that he only uses his phone for photos now.  I said I was surprised since he couldn't really make decent prints, but au contraire, he said.  He had made huge prints from them.

I didn't believe him.  Rather, I thought he must be using some software that I wasn't aware of.

I believe him now.

Phone pics have their own look, much different from those of digital cameras.  And to be honest, the apps you can get for free online to cook them are simply tremendous, much more creative than the expensive ones for the computer.  Why these apps only work on phones. . . I don't know.  But fuck it.  I'm taking more phone photographs.  It is liberating.  It is fun.

This Mormon Priest life is getting old, but I'm halfway through January.  It wasn't until very late in the day yesterday that I realized it was Friday.  You know it when you go out.  You can feel it.  People move differently.  Something.  It is palpable.  It is distinct.  I felt it when I went to Whole Foods late in the afternoon.  I wanted it to be Friday for me, too.  I felt a jolt of energy.  I thought about calling my mother and telling her I was not coming over.  I wanted to party.

When I got home and put the groceries away, however. . . I had nothing to do.  There was no party.  I got in the car and drove to my mother's.

Back home, I began to prepare dinner.  I was making a version of the ginger Cod with broccoli and rice.  As I was preparing it, the tenant stopped by to ask me something.  We chatted as the food sat on the counter.  Then, sun setting, she left and I got to making dinner.  I turned on the television, but something was wrong.  I couldn't change channels.  I unplugged everything from the wall.  There would be no news tonight.  O.K.  Cooking dinner without a glass of wine.  WTF?  When everything was plated, I plugged the cable equipment back in, and when it had rebooted, I put on a travel thing on YouTube.  Dinner was delicious.  I drank kombucha.

I wanted to party, and I had prepared for this at Whole Foods.

After cleaning the kitchen, I pulled out the dulce de leche I had gotten.  I decided to smoke some pot.  I dialed up the 2005 movie "Shopgirl."  Claire Danes.  I always thought she should have gotten an Academy Award for her performance, but the movie was panned.  The critics were terribly wrong.  It is a wonderful movie.  Jason Schwartzman is terrific.

It was late and I was buzzed.  I'd seen this movie a few times.  Halfway through, I turned it off.  I'd go to sleep with marijuana dreams.