Not What Really Concerns Me 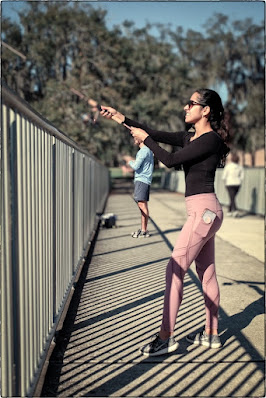 Woke to the sound of the awning outside my bedroom flapping and bouncing in the dark.  Wind.  Lots of wind.  I rolled over and squinted at the LED clock numerals.  Blur.  I squinted more and harder.  Almost seven.  I got up and stumbled to the kitchen to commend the coffee maker to grind and brew.  I opened the kitchen door.  No rain, just wind.  Cool, not cold.  But the rain came as the coffee maker chugged.

I'm glad I got out yesterday.  I decided to ride my bike.  I strapped a camera on and eventually got out the door.  It was a fine day, a lovely day.  I peddled old routes, taking my time, past the hospital and the old gym, down antique row.  I stopped at a boxing gym to look inside.  A woman greeted me.  How much, I asked.  Jesus.  This is the second boxing gym I have stopped by.  Apparently, only the rich box now.

Onward.  Up the hill past the spot where my little Vespa and I were crushed, past the bar across the street, up the hill.  I stopped at my buddy's camera repair store.  He was with customers but greeted me right away.

"Where have you been?  When are we going to do a Polaroid workshop?"

The last time I was there, he had gotten a Polaroid 8x10 film processor but he did not have everything he needed.  I gave him enough equipment to make the thing work.  He had a bunch of the very expensive 8X10 impossible film, and of course, he has lovely 8x10 cameras and lenses.  I had told him I would come back and help him get started.

I didn't.  I got Covid instead.

He set up an 8x10 camera in the courtyard.  He wanted to try one now.  While he talked with customers, I tried to remember how everything worked.  It has been a couple years since I've worked with this equipment and film.  I was having trouble.  The film holder he had was in awful shape.  I got the film loaded but I couldn't get the transparency part with the developing chemicals to go into the other slot.  Unnoticed, I broke the pod and dripped the blue developing paste all over his shop's floor.  I mean. . . it was a mess.  I was embarrassed.  Big shot, eh?  Gonna show the camera guy your chops, are ya?

I got paper towels and cleaned while he sold cameras, estimated repairs, etc.

I went to the courtyard to make sure the camera was ready.  It was a beauty, a five thousand dollar wooden field camera.  The camera was much nicer than mine, but I couldn't get it to focus.  I was really starting to falter now.  Eventually, I realized that the bak focus on the camera needed to move.  Good.  I wouldn't need him to show me how to work the camera.  I got the loaded film holder, took a meter reading I hoped was correct, set the shutter and shot.

I never got the transparency loaded, though.  I told him I needed to watch a video to see what I was doing wrong.  He set me up with a tablet.  I couldn't work the damn thing and shut it off by accident.  My head was spinning now.  I turned it back on, but it wanted a password.  I had to interrupt him to come enter it.  I watched the video.  I was doing everything right.  It was his shitty holder that was the problem.  Just then, I heard a sizzle and a pop.  I looked to the processor.  Smoke was pouring from every seam and opening.  I unplugged it and took it into the courtyard so as not to fill his shop with the foul odor of melting wires adn metal parts.  The capacitor had blown, he said.  Everything I touched had gone to shit.  I'd been there far too long.  I had not intended on spending the day there.  Now, embarrassed, I told him I would come back with my equipment and we would try again.  He seemed to be fine, but I was feeling very nonplussed.

When I got back to the street, the day was still fine.  I'd taken no pictures.  Well. . . not the first time in my life.  It was getting late.  I decided to ride home.  I took an urban bike trail I'd never been on before.  I crossed a bridge over a canal.  There were people fishing from it.  I rode on, then thought, "WTF?"  I turned around and rode back.  I approached a couple and asked if I could use them in my picture.  "Sure," they said.  The girl was pretty.  I wanted to photograph her, but I took several of him anyway.

When I finished, I said, "If you want, I can send you copies."

I was talking to the girl.  The boy jumped in. "Here.  I'll give you my email address."

I laughed and handed him my phone.  He wasn't about to have his girl give me her number.

That was the entirety of my photo taking for the day,  Nothing good.  Nothing profound.  Nothing.

Not much of a photographer, I.

When I got home, I felt tired, worn out. . . something.  I lay down to take a brief nap.  When I woke up, it was heading toward dusk.  I called my mother and said I wouldn't be over.  I really didn't want to cook.  I wanted a big bowl of ramen.  I tried to order online, but the restaurant wasn't taking orders.  That is the message I kept getting.  What then?  I decided I didn't want to go out to get food, so I made a meal of eggs and rice with sautéed peppers and onions.  I mixed in peas.

I sat down on the couch and watched the rest of "Shopgirl" while I ate.  My nose and lips swelled.  My eyes teared.  I'm a mess.

My art and travel buddy just texted me a piece of writing about the author Jim Harrison.

Not what I needed right now, but perhaps it is what I deserve.