Eyes to See It All 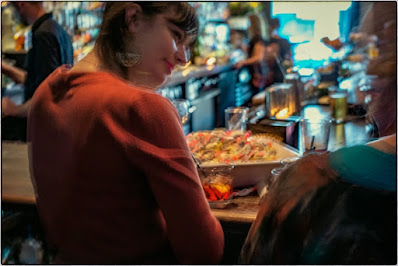 I wanted to drink last night very badly once I realized it was Friday again. I miss drinking on Fridays. I haven't had any trouble at all with Dry January, not until last night. Perhaps I wanted to celebrate my father's birthday. Maybe that was it. But thank God Q is doing a Dry January, too. It was like having an AA partner. We talked about it.

"Strength my Brother.  Old Nick will lead you into temptation.  Be strong."

And then we stated our new pant sizes and grabbed a couple kombuchas.

Later, I fixed cod, grilled cabbage, and kale for dinner.

It was a horrible Friday night.

Sin.  What a concept.  We are fascinated with the corruption of the "sinless."  Temptation.  Seduction.  Transgression.

It's what sells the news.

I grew up with hereditary criminals of the underclass.  They were fascinating in their own way, too.  Sin was their currency.  Exploit and exploitation of the most dastardly kind.

They propelled me in my search for Twisted Princesses.

Sometimes you must settle for the daughter of the Governor of a Mexican state.  You know what I mean.  Though closely related, it is somehow better than the daughter of a Cartel Kingpin.

Such choices are demanded of us if we choose to live a fascinating life.

I should probably have gotten that bottle of scotch last night.

I worry a bit about the cat.  It has been cold here.  Not New England cold, thank god, but cold enough.  I'm sure she is fine, but it's got to be rough on her when her boyfriend goes into a warm house to sleep at night.  She's an alleycat, like me, always looking to date up.  I've posted photos of her boyfriend.  He is a beautiful cat.  I understand her affliction.

One of the few interesting things in my sober monk's life is the Apple Music algorithm.  It has been working overtime sending me lesser known but fascinating music.  At least I think so.  I'm still posting much over at Radio Selavy (link).  Feel free to explore.

Music is very personal, though.  If this stuff isn't for you, that's o.k.  I'm not big on Katy Perry or Lady Gaga myself.  We can just agree to having different musical impulses.