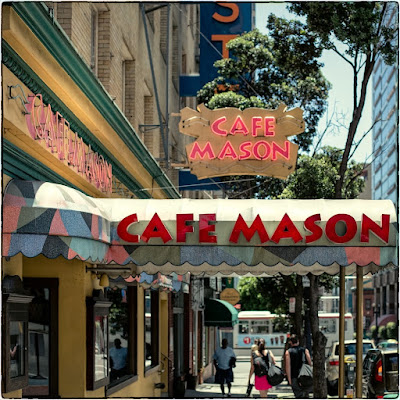 Each morning before I begin to write, I choose a photo.  It is just habit perhaps, but I can't start writing until I put one up.  Sometimes they are related to what I am going to write, and sometimes they influence in major or minor ways what I actually write.  Sometimes there is no discernible connection.

Today is my father's birthday.  He would have been 102.  He died when he was 60.  I think he would have enjoyed getting breakfast at the Cafe Mason in San Fran.  I know I did. Q took me there one year when I had booked a decent hotel near Union Square.  For most of my life, I stayed in dives when I came to the city.  One place, the San Remo, was an ancient fisherman's flop gentrified (in some ways).  The wooden floors were creaky and the walls thin.  The bathrooms and showers were at the end of the hallway.  It was a grand place for relatively little San Fran money.

Eventually, however, I needed a room with a view and became middle-class enough to afford it.  By that time Q had gotten married with baby and had moved to the wine country.  He knew the Cafe Mason from the times he came into the city to work.  It was completely French and wonderful.  The waitresses were all knockouts.  The place became mythologized for me.

Many years later, I was back at the same hotel with Ili.  Our first morning, I took her to the cafe.  She de-mythologized it for me quickly.  There is nothing like the scorn of a woman you love to ruin a thing.

If I ever get back to the city, I'll probably give it another go.  Just to see.

That's a big "if."  My own birthday is coming up and a group from the factory have planned a birthday gathering at one of my favorite restaurants.  God love them, but I'm not sure I want to go and sit inside with a group of people.  The last time I did that, I got Covid, and I don't think it was Omicron.  It hurt very badly, and I'm not sure I want to chance it again.  I have to make a tough decision.

I've always known how to be by myself.  I don't know many people who can do that.  Most people need the chaos and cacophony of group life to keep them from thinking too much.  When they are left alone, the snakes in the old cabeza begin to roil and wiggle, and they begin to feel mightily discomfited.  I, however, had early training as an only child growing up in the country.  I learned to play alone.

Two years of monk-like isolation, however, have brought about some changes.  I still enjoy my solitude.  Lately, though, the tenant has been stopping by most early evenings, and those, along with the daily visits with my mother, seem to serve enough respite.  I'd much like to see my own true love a few times a week, of course, but living together has always proved to be too much. . . eventually.  The "other" in time becomes too much the warden, and that is when troubles begin to brew.  Not for most, I am guessing, since they require much less private time, even to the point of being irritated and confused by it.  I don't think my last true love could stand to be alone.  The trouble came when she could no longer stand to be with me.

But I wander (as I so often do).  Two years of isolation have brought about some changes.  I think I have developed a kind of autism or Asperger's syndrome.  Minor symptoms, of course, but, for instance, I don't think I read people's reactions as well as I used to.  I mean, man, I could read a room.  I'm also much less vocal, but when I am, I'm out of control.  Recently, however, just since I quit drinking, I am much more reserved.  Quieter.  It seems an effort to speak.  I think that not drinking, too, has taken a bit of brass off my personality.  I've become more of that shy boy I used to be.

The faux-Aspergers seems to show up often here on the keyboards.  I tend to get manic sometimes with sharing things.  I fill up c.c.'s and Q's (and other's) inbox with clippings from the morning's news.  I am sure it maddens them, but I can't seem to help it.

And when people write to me, I respond eagerly, immediately.  To wit: I got a new hat.  I like it better than the other.  I put it on and sent photos around to the usual suspects, the ones who are most familiar with my stupid antics, the ones who who won't judge me or who have already judged me and don't care.  They are selfies, funny pictures that need no captioning.  I thought them cool.  And so. . . I made the mistake of sending them off to my Famous Fashion Friend thinking to show her that I didn't look so bad in a hat.  Somehow, though, after sending them, they looked worse than the ones I sent to my non-judgmental friends.  Much worse.  Soooo. . . I thought to remedy that by sending her a little test video I made with my new camera gimbal and iPhone that I had already shared with others. . . one in which I am sans hat.  And, of course, having sent that. . . it was too much.

I wonder if those with true Asperger's or autism have moments of embarrassed self-awareness?

Well, the deal is done.  Forward.

It is funny to think I am older than my father was.  He is now my junior so to speak.  I wonder what we would think of one another if we were to meet?  It is a strange but pervasive thought.  We could meet up at the old Cafe Mason and ogle the waitresses in extremely subtle ways.  I've never been overt, nor was he.  He, perhaps, passed on that decorum to me.  A gentle keep your hands to yourself demeanor.  I must say, of all the things he taught me, that one has served me very well. 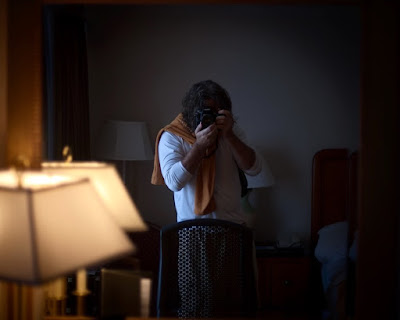