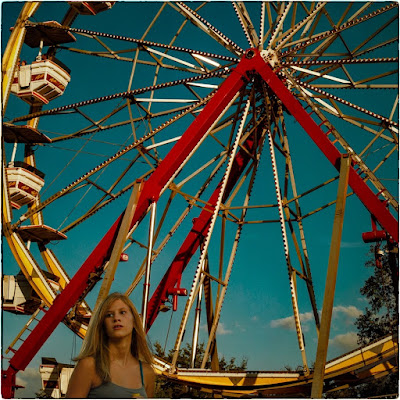 I "discovered" an old hard drive last night, with photos I haven't seen in many, many years.  My drives consist of files with folders within folders, mostly labelled with dates.  This does not make it easy to know what is in there.  So. . . I open folders one by one.  I think to label them, but many if not most times the photographs that lie within are not of the same thing, not person or place or thing.  Thus, if I want to organize the folders within files within drives, I have to begin with the first folder. . . oh, I don't even know what it would take.  Someone with a more organized mind than mine.  Rather, I just spend hours clicking away at files and folders, and, as with last night's endeavors, marveling to find things I have not seen in years.

After which, I am as lost as ever.  I would simply have to repeat the process to find a picture again.  Agonizing.

I have billions of photographs.  I should at least cull them, delete the "bad" ones, but I find it difficult to say a photograph is bad.  They all contain something of value.  I guess that makes me a hoarder.  Yes, I guess I am.

I am a hoarder.

Last night's finds have me excited to go back and do some editing.  There is a lot of value there.  And, of course, some images simply improve with age.

I thought I'd have a new video to post for you here today, but I've found I'm a bit shy of some equipment.  I went to The Guitar Center yesterday to see if I could get up to speed on audio.  They sell all equipment, not just guitars, so I figured I could get some help.  If you want to hate music, though, just go to a music store.  Everywhere, assholes are trying to show off their chops on electric guitars, the sound of their playing clashing with the loud rock music being pumped over the thirty or so speakers in the store and with each other.  The cacophony is stupefying.  And that may explain the help.  After a long while of wandering and looking, I got a woman to assist me with finding the equipment I needed.  She knew little more than I.  She kept looking things up on her phone in response to my queries, and finally she said they didn't have the things I wanted, whatever that was, in the store.

I made a little video for Q telling him I didn't know shit about audio.  I did this because I bought the expensive gimbal and stand for my iPhone.  I just felt the need to use it.  It only takes about ten times the effort to do that rather than texting.

Q said he has the solution to my problem.  It took me a while to understand, but yea, he is sending me the thing I need.  One thing, anyway.  But once I get it and get everything ready for production, I'll be daunted.  Good digital apps take so much expertise that I get shaky with it all.  My nerves become frayed and I just place everything in a box and shove it in the closet.  I have a closet and an attic full of defunct equipment that was mere years ago state of the art.  It is all fairly worthless now.

But what else have I to do?

I wish I had a story to tell you, but all I have are dreams, and as I've said a trillion times, other people's dreams are boring.  Still they may be less so than what I'm writing now.

Dry January is winding down, and it makes me wonder.  I think I should stay off the hooch until I reach my goal of eight pounds, eight ounces, or whatever my ideal weight should be.  That's what I think on the one hand.  What I think on the other is quite different.  Two voices on opposite shoulders.  One voice is clear, the other seductive.  I love seduction.

Carnivals are so appealing.  Everything bad for you is there.