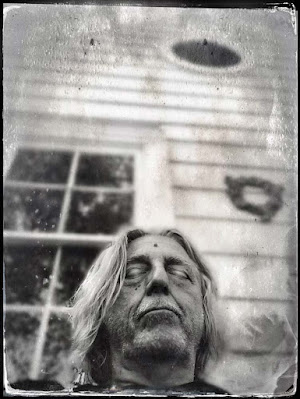 Among other things that were done to me yesterday, I was weighed.  I was right.  A week of plant based diet and abstinence had not affected my weight.  I mean, that's good in one sense, but disappointing in another.  The thing I am hoping for is that it is not ominous.

But enough of that.  Seurat was 31 when he died.  Van Gough, 37.  Old Gauguin outlived them all and died at 57.  All of them were ill throughout their adult lives.  Van Gough's teeth were terrible, and he had ten of them pulled when he was still in his twenties.  He caught gonorrhea and had to suffer the torturous cure in the days before antibiotics.  He and Gauguin each suffered with the long term effects of syphilis.

Almost everyone was an alcoholic.

As you might have guessed, I spent last evening watching art documentaries, in particular, the end of impressionism.  I watched that instead of the news as I ate my leftover dinner, and when each was done, I decided to take an evening stroll.  It was a chilly southern night, not cold, but made colder because of the dampness.  By the lake, the wind was blowing the air clean through me.  But after having just watched the impressionists, everything looked different.  In my neighborhood, most yards are lighted from the ground up at night, soft lighting revealing the underside of leaves and branches.  Sure, I see this every evening, but last night I noticed the effect, the strangeness and glowing aura it produced.  A slim moon shone in the western sky.  I noticed the night shadows and the swirl the wind made of the trees.  Every living thing looked like a late Monet.

How's that for the power of suggestion?  And the power of art, the goal of which (at least the sort I like) is to show us the world beyond cliches or to rework cliches in ways that seem new.  My neighborhood is a cliche.  People enjoy their cliched lives, and I am not immune.  I chose to live here, among the cliches, because it is comfortable.  There are cliches that I enjoy and some I love.  The thing is, I live with the realization that they are cliches.  The fact is not invisible to me.  And though some are even sacred, I am not opposed to them being parodied.  Parody, they say, is a high form of flattery, and perhaps there is an envy in it.  As radical as the impressionists were, they, too, became cliches.  Don't go trying to get famous painting Monet's water lillies.  You might, but only in a Norman Rockwell way.  Let's qualify "only," however, for Rockwell lived a lucrative, cliched life.

The question, as always, though, is would you be willing to suffer ingloriously for your vision and your art?

I'd rather be Seurat who came from a very wealthy family.  His suffering was of the gentler kind.

This morning, I opened my email to a notice from Legacy dot com that it was the anniversary of my beloved Emily's death.  Remember her, my teenage love?

WTF?  Why would they send out such notices?  I read further.  They would take my money to plant a tree in her name.  The Emily Oak, I guess.

I still don't know of what she died.

But as Bukowski opined, shit and death are all around us.  And then, monetized and famous, he moved into a cliched neighborhood and bought a cliched automobile and enjoyed his new existence.  He was one of the lucky ones.

Life can be cruel, life can be sweet. . . . I don't know.  The lyrics just popped into my head when I wrote the last line.  I may be no genius, but I know which one I'd choose given the option.  I know that much, at least.

O.K.  I need to get moving now.  The maids will be here soon (delivered with a wry smile).