Tales of Adventure and Daring 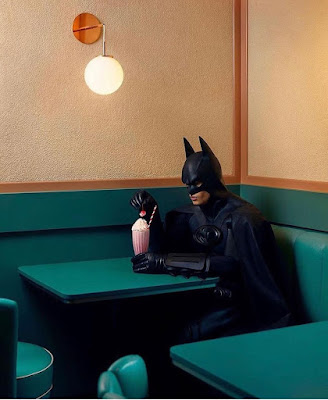 The day stretches before me like a long highway.  No, wait. . . it hangs like a ripe fruit waiting to be picked.  Whatever.  Maybe it is like the intersection of several highways. . . or an orchard full of ripe fruit, and my dilemma is which highway to take, which fruit to pick.

See how things are?  I needlessly turn something nice into a stressful decision making process rather than simply enjoying it.  I must simply choose to enjoy it.

Though I slept fitfully, I rose late so it seems alright.  I have no great need to exercise today, and I thought last night that today was a good day to go somewhere with cameras.  I still think that. . . but the day slips away, first slowly, then suddenly, one day so much like another. . . .

I posted yesterday's photo thinking it looked something like Gauguin at the end of his life.  Big mistake.  I should have remained in the Bat Cave.  I thought to leave it up for a day and then delete it, but by the end of the day, the photo had been downloaded a hundred times.  The paparazzi have wanted to nail Bruce Wayne.  Batman unmasked.

I might have chosen a more flattering photograph but that would not have been as illustrative.

My advice is to wear a mask.  Reality can never match the imagination.

Last night, I watched a documentary made eight years ago about the history of climbers and climbing in Yosemite Valley (link).  It was quite fun for me as I "knew" many of the dirtbag climbers.  I have to put that in quotes.  I only met them, really, though they would remember me when I saw them again.  I "knew" some of the best climbers in the world.  And truly. . . and I say this without modesty. . . some of them fell in love with me.  The women.  I looked like a climber and I did climb, but not at a high level.  I was "famous "in my own hometown for a half page picture of me on the front page of the local section of the paper climbing a rock walled building.  Living here in the flatlands, my buddies and I were climbing anything at the time.  We put up climbing holds on the overpass of a highway the state was building.  That was nice for a good while until the authorities came out and chopped them off.  When a group of climbers came to town and built a climbing gym, they gave me a free membership.  Oh, boy. . . I was really something.  Right up until kids started coming to the gym.  They were like little monkeys.  It wasn't long before I fell behind what those little maniacs were doing.  That's when I started touting "real rock" over plastic holds.

"Out there, kids. . ." as I waved my hands to the distant beyond, "on real rock, there are no colors to tell you where your next hold is.  You are searching for something, anything, to grab.  If thing go wrong. . . ."  I would let the sentence trail off into ominous silence.

Once, while playing pool with the famous "Brothers Whitaker," Jim and Lou who were renowned mountaineers and the first Americans to climb Mount Everest, Jim said to me, "You like working out in the gym, don't you?"  He was about seven inches taller than I and had a demeaning grin on his face as he pulled himself to height to tower over me.  What the hell, I thought?  What the hell?

"Alright.  O.K." he said relaxing.  He was just putting me in my place.  It didn't matter to me so much, though, as the women's World Kayaking Champion was in the bar and was all about me.  Maybe that is what pissed old Jim off, I thought.  It was o.k. with me.  Jim had to climb the tallest mountain in the world to become a man, I thought.  I was going to do it the other way.

Out west, in climbing towns, I was sometimes misidentified as one of the Huber twins, two of the most famous climbers of the era (link).  I enjoyed that, of course.

Jim Bridwell--probably the most notorious and legendary climbers of his era (and beyond)--and I got along.  I was making documentary videos at the time, and over beers we talked about the possibility of cooking up one about his life.  He was excited by the idea, but, as has most often been the case in my life, I didn't follow up.

I could tell more self-aggrandizing tales, of course, a lot more.  I was singled out by organizers as a cheater at the World Climbing Championship while having breakfast at the base of the wall at the the Cliff Lodge in Snowbird, Utah, a competition I was only there to observe (link).  Oh, man. . . my head swelled real good for my buddies then.  Mr. Fucking Big.

I did climb, just not at any significant level.  I did some of the Fifty Classic Climbs in America with my Yosemite buddy, but only because he made me.  As I have said before, there was a real difference between us.  He liked the challenge of the adventure.  I just wanted to have done it.  He did it because he enjoyed it.  I did it so I could hang around with people who did it.  I did it because my father had pumped me up with tales of adventure and daring.

I did it for the girls.

As my dead ex-pal Brando used to say, "If it weren't for women, I wouldn't even take a shower or brush my teeth.  I'd probably be crawling around naked in the woods hunting for nuts and berries."  For an adventure travel guide, he sure had no skills.  I think that's why we got along.  It was always about the show, always about the telling.

"There I was at thirty thousand feet.  Rats had eaten my parachute."

I know I have wearied you with this self aggrandizing drivel.  Though I could go on and on, I'll pause for now.  But watching that documentary last night got me going.

In truth, though, people like that scare the shit out of me.  I am a tender romantic.  They are crazy loons.

Where will I go today?  What will I do?  It would be nice to decide here in a minute.  But I should be more like the cats looking in at me now through the bottom panes of the kitchen door.  I shouldn't worry about what to do.  I should just enjoy the day.