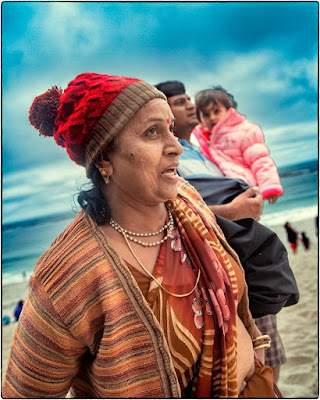 I did it again, stayed up way too late listening to music and futzing with pictures.  I did it all day long.  It was fun,  I was a bit crazy with it.  There are so many new ways to process pictures, and I have been exploring them.  I went mad with it.  And the music (link). . . oy!  So much good music it drives me mad.

As I've said, though. . . I'm in an emotional state.  I'm manic right now, jazzed and happy as I can be.  As far up as you go, though. . . . Maybe it's been the moon, full a couple nights ago.  Maybe it is Dry January. Maybe it is not pushing heavy weights at the gym.  I don't know.  I got a cheap fisherman's shirt from China a month after I ordered it, and I put it on the other day. Maybe wearing that instead of the usual t-shirt changed the way I feel.  Maybe it's the hat that is being shipped.

Just maybe it is the beautiful weather.

I'm feeling inventive.  I'm thinking about working on some podcast stuff.  But. . . last night I tried editing some video, and although I used to do that many years ago, the software has changed so much I couldn't figure most things out.  I will have to go to school on this if I am to edit well again.  I know how to edit, I just don't know the software now.  I've been asked to do some camera work on Friday by someone making a documentary on a famous German filmmaker.  I'm not sure about doing that, though.  It would take up a significant portion of the day, and I am so used to doing. . . nothing.

I have to get out of the house though.  I've been sitting at my desk for the last 48 hours.  In part, it has been because it's cold.  The nighttime temperatures have dipped into the high thirties and low forties.  It barely reached sixty degrees yesterday.  You may not think that's cold, but everyone is wearing four layers around here.  However, the sun is bright and the skies clear as water.  I need to make some pictures.

That's a hell of a way to be happy, isn't it?  Sitting alone at a computer listening to music?  Surely something is wrong with me.  That just isn't right.  Perhaps I've finally snapped and am mad as a hatter.  Crazy as a loon.

I'm shipping off a print today.  Maybe that is making me happy.  I'm an artist, goddamnit.  We're temperamental people.