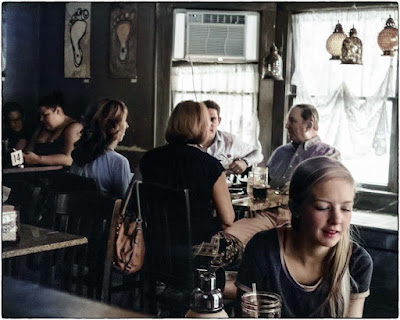 I saw no one yesterday.  Not a single person.  I didn't go to my mother's.  It was "cold."  It is colder this morning.  I don't know how people live winters in the north.  I really don't.  I'm a lazy southern boy, I guess.  I know that all the great culture comes from colder climes and that nothing but syphilis and violence and madness comes from the horrible southern heat, but in the modern world where we destroy the planet with the consumption of electricity, I prefer a.c. to heaters.

I have gotten old.

But that is not what I meant to say at all.

Somehow, yesterday's isolation turned into joy.  Sure, I'm becoming as mad as a loon or a hatter or whatever reference is apropos, but yesterday was a treat.  I sat at my computer going through old hard drives looking for some particular things, but what I found was a treasure trove of images I'd never really looked at or touched.  Many of them have now been touched.  As I worked, Apple Music was proving to me that it knows what I like.  Those algorithms have me down.  I cranked up the music and worked on images, just as I used to in the golden days.  And fuck me if the new tools that Adobe and other companies have developed don't give me new options.  And so the morning drifted into afternoon.  I took a break and stepped outside.  It had warmed, but it was still chilly and a bit breezy.  No matter, though.  I needed exercise, so I dressed for the outdoors and headed to the park where I do my fitness shuffle.  Was it the weather, or was it the mania the morning had produced?  I can't be sure, but my I was quicker/stronger/better than I was the time before or the time before that.  I seemed to be merely old rather than ancient.  I shuffled around that course like a hermit crab rather than a snail.  I had the strength of ten amoebas. My flushed face was smiling.

Maybe it was the sunshine and the crisp blue sky.  I don't know.

I stopped and bought some chicken thighs and kale and baked beans at Whole Foods.  When I got home, I showered.  And then it was four o'clock.

Freed from the shackles of time, I lit a medium sized cigar and sat on the deck.  After showering, I had put on a cheap, new fisherman's shirt I had just gotten from China.  It made me feel good to be wearing something other than one of the t-shirts I've been wearing consistently for the past two years.  The longs sleeves kept me warmer.  I was feeling. . . what?  Not sure, but I wanted to keep feeling it.  Maybe I need to dress again.  Yea. . . just waiting on my new hat to arrive.

I put the cigar down halfway through and began to prepare dinner.  Kale in the cooker.  Beans in the pot.  Grill on high to burn off the germs.  Chicken simply spiced with Kosher salt, course ground black pepper, and plenty of red pepper to give it heat.  I relit the cigar and sat while fire did its job, then I plated dinner.  Two chicken thighs.  I had moved from pescatarian to polloterian.  It was the weightiest meal I've had this month.  Salt, red pepper, and balsamic vinegar on the kale.  When I had finished it all, down to the last morsel, I leaned back and held my belly.  Damn, Sam.  I had really eaten.

It was too cold to sit outside comfortably now, the sun having set, so I tried smoking the rest of the cigar inside.  That didn't last long.  Smoke hung in the t.v. room like a fog.  I took it outside.  Did the dishes.  Cleaned the counters and the stove.  I put on music again and went back to the computer.  Time conspired with image and melody.  Before I knew it, it was midnight.  I haven't stayed up 'til midnight for at least two years.  I wasn't ready for bed.  I was wired.  I could stay up all night, but I knew better.  What cold I do?  I shut everything down, took my vitamins, brushed me teeth, and popped a sleeping pill.  A whole one, not a half.  I didn't wake until seven-thirty.

I haven't looked at what I did last night yet, but I'm sure I'll be like, "What the fuck?"  There won't be much that impresses me.  No matter.  I had plenty of big fun.  I uploaded videos to YouTube, though the quality was shit as the videos had been compressed for sending over old computers.  And I uploaded a bunch of music to Radio Selavy.  I haven't figured out how to link it to this blog yet, but I will.  One need not go searching for it every time one wants to hear some menstrual music.  It's an alternative station, kids.  Don't look for many radio hits there.

So, yea. . . I am dangerously happy this morning.  You know what that means.

"You know how good you feel right now?  That's how bad you are going to feel when it's gone."

The morning is cold and bright.  I must make some pictures today. I can't sit at the computer all day again. Having made nice pictures made me happy.  If I can make more today, I'll be ecstatic.