More Tales of Adventure and Daring 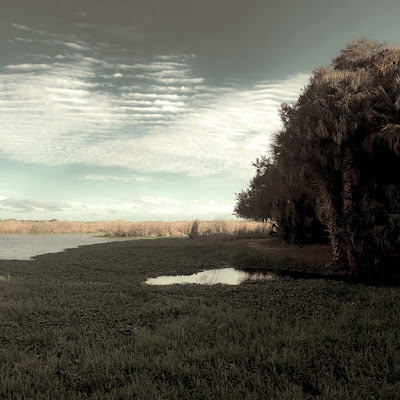 Fuck yea!  I did this one with my phone.  To my mind, anyway, it looks like a Russel Chatham painting.  It's not straight out of the phone, of course, but that was the capture.  I'm going to try printing it large and see how it looks.  All fingers crossed.

Oh. . . I DID leave the house again yesterday.  Took my big Liberator and a bunch of film holders to a State Park with the idea of making some epic photographs.  When I got there, the entry fee was six dollars.  The lady taking the money looked at me, smiled and winked.

"I'm only going to charge YOU four."

I carried that heavy motherfucker all through the jungles and the swamps.  I took photos, but I don't think I got anything epic at all.  I just felt I needed to trip the shutter after all the effort.  And it was a lot of effort.

But it attracted attention.  I talked to many people.  I am such a shut in that this was much like the time I went to the museum with my friend.  I was a real Chatty Kathy, the Park Docent, if you will.  I answered the curious onlookers' questions about the camera.  I informed them about the coming and goings of the park fauna.

"Can the manatees go in the ocean?"

"Yes they can and do.  They come into the springs in the cold weather for warmth, but lately, many of the manatees have begun to stay year 'round.  They have become like the monarch butterflies who live here now without migrating."

"Really?  There are monarch butterflies here all year?"

"Yes, they have become something of a sub species.  I have a butterfly and hummingbird garden, and it is always full."

"Yes, I have some that come quite often."

"But this doesn't run to the ocean, does it?"

"It sure does.  It is one of two major rivers in the world that runs 'backwards," that is, away from the equator.  This river empties in Jacksonville."

I met a couple who were visiting from Michigan.  They asked me about the springs.  I used to dive in the springs decades ago, before the place was a State Park.  What is now the park was privately owned and we had to drive down dirts roads with brush and trees scratching the sides of the car.  When we go to the boil, it was a steep climb down (and later back up) some crumbly, rocky banks some thirty feet high.  I was feeling some real expertise.  I explained all this to them.

"My buddy and I--we were just kids--dove into the cave without lines.  We had some ratty old underwater flashlights.  The bottom of the river there is about thirty feet deep.  There is a hole in the river bed you drop into.  It slants back and down into the cave.  You come out at about ninety feet into a giant cavern.  Then you drop down to the the place the water flows out at about 150 feet.  When we got there, the current knocked us ass over tea kettle.  Our masks were ripped from our faces.  We knew, of course, how to get them back on and clear them, but then we were shining our lights into each other's faces in a not so controlled panic.  We motioned to one another that we should surface.  But we went straight up and into a chimney that didn't go to the surface.  It just dead ended.  There were many, many of these.  At that point, I figured we'd run out of air in about two minutes 'cause you could hear us exhaling bubbles like crazy.  This happened again and again.  We got very, very lucky, though.  Eventually, we dropped back to the bottom of the boil and then followed the slope back up.  Out of sheer good fortune, it led us to the right chimney and we got out alive.  When we got out onto the bank, we barely spoke."

Their eyes were wide open at that one.  We talked a bit longer about this and that.  She had just taken early retirement from a hospital.  She was a nurse.  We spoke of Covid.  She had a theory, her own, she said, that dark skinned people were more susceptible.  I said yea, I have dark skin and I got it even though I was vaccinated.

"No," she said, "I mean ethnically darker people."

Whoa!  Yup.  She was from Michigan alright.

I had only one small yogurt and a can of water all day, and carrying the camera and gear and doubling as a tour guide had worn me down.  I looked at the time.  Late afternoon.  I made my weary way back to the car and headed toward home.  But there was one more stop I wanted to make, another springs that is not as well known.  I'd never been there before.  And that is where I took the picture at the top in the late afternoon sun.  Lighting is everything.  I am lazy and always miss the best light of the day.

I'll try to develop the film from yesterday today.  I have little hope, but it was good to get out.

While I was out, I got a call.  My phone doesn't ring unless I have saved the number, but they had left a message.  It was from some company and they referred to my doctor and asked me to return their call.  My legs went soft.  WTF?  I called back immediately, but I was told to leave a message.  My hands were shaking.  Surely this was about my blood work.  I called again.  And again.  I never got an answer.

I haven't heard back from them yet.

I read this morning that men who live alone, especially after a breakup, are at much greater health risk than others, even more than women who live alone.  Sure, I thought.  Perfect.  What chance do I have?

I guess I could have asked the lady at the park entrance out.  Ha!

I have an idea of visiting all of the state parks here.  Some twenty of them have cabins that one can rent.  There's an idea for travel.  I looked at the ones at the state park I visited yesterday.  Rustic things.  And I imagine one could go a bit spooky in the head being there alone in the night.  But what the hell.  I'll keep stretching out my voyages until I can't return home.  Poco y poco.

Depending on how my lab test turns out.