No One Ever Knows 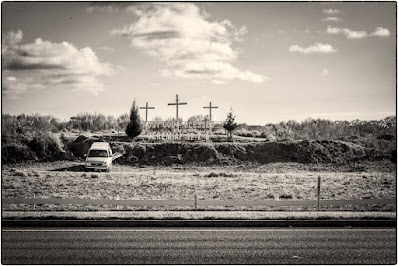 I got a call from my climbing buddy out in Yosemite yesterday. He was driving into S.F. early in the morning and just wanted to chat.  I was on my way to the gym.  It was a fun conversation and we laughed much.  Eventually though, he hit some rough patch of country where cell reception was nearly impossible and we had to end the call.

That was in the early morning.  Very late in the afternoon, just before sunset, he called again.  And, once again, I was in the car, just pulling into the parking lot of the grocery store to get the last of the items I needed to make dinner.

"Hey man, you're not going to believe what just happened.  I was on interstate 80 in Oakland and on the road ahead of me I hear a bunch of noise and then I see smoke.  When I got up to it, there were bodies lying all over the ground.  I pulled over and grabbed my emergency medical kit.  A car had run over a motorcycle.  There was a lady lying in the grass and a guy trapped under the car.  A bunch of his gang banger biker buddies were trying to push the car off him, but he had hold of the tailpipe.  It must have been burning his hands, but he didn't know it.  He was out of it.  His legs were broken in five or six places, bones sticking out everywhere.  He was barely breathing.  A cop got there a minute after I did, and a woman who was a nurse had stopped, too.  The cop cut open the guys shirt and I started pumping on his chest while the nurse gave him mouth to mouth through my mask."

The story went on and on.  My buddy has been heavily trained in medical emergency procedures as he was an Outward Bound instructor for years and used to take groups into the wilderness for 21 day survival trips.  He told me in detail what happened.  He sounded a little loopy.  He needed to talk.

"I thought about you.  I hope this isn't upsetting you."

"No man, I don't do trauma.  Well, only romantic trauma."

"We kept his heart beating, but barely.  I thought about us keeping him alive and then about what his life will be like starting tomorrow."

"That fellow, you know, he was all cool, maybe thinking about getting a new tattoo, and then everything changed.  It happens that fast.  You never know."

We ended the conversations with a lot of "love you"s.

It got me thinking about my own accident and how lucky I was but how unlucky I was, too, but mostly I was thinking about Ili and how she came and stayed with me 'round the clock and how much I believe she saved my life in all of that, as much as the doctors did, and as I grilled my steak and asparagus, I drank a deep glass of Cab and began writing her a message in my head that said all of that and more, writing again and again the intro and ending that qualified why I was writing and why I wanted to write.

Of course, none of that ever made it to print.  As much as I wished to say it, she would wish as much I hadn't, I imagined.  And it pisses me off because as I sat out on my deck looking over the end of the day, the squirrels and birds so active before sunset, I thought of how we would watch them together and how we identified the bird calls and how I was pretty good at imitating and pissing them off, and how we liked special birds, the small black and white wood peckers and the blue-gray catbirds and the finches.  I thought of her tearing up the old deck before I got home one day so that I would have to build a new one, and then of her making potted gardens for it, the old "fill, spill, and thrill" way.  I thought of how quickly I recovered, or pretended to, at least, pushing myself because I wanted to be "normal" and not a cripple after the accident and hiding and denying the pain and disability I suffered wanting to still be "the man."

That poor guy, the biker, the banger.  You realize that none of that is important, only the sweet spots, the quiet things, and then you find that those get taken, too.

Asparagus done, the steak sizzled, the jasmine rice ready, I plated my dinner and poured more wine and sat out alone on a Friday night eating a delicious meal.  And weirdly, not a single person walked by.  I sit out almost every day and the street is a nonstop track of late day dog walkers, but not that night.  Nobody. Nothing.  Just me and the cat.  I felt an eerie aloneness.

Clean up, of course was easy which is always awesome, and then I poured a scotch and turned on the news I had set to record while I ate.  The Ukraine, of course.  Injury and death.  So many lives changed, so many ruined.  My buddy saved one life today, perhaps.  There were hundreds more that needed saving in the Ukraine.  I will call him today to see how he is doing.

Me?  Oh, man, I'm fine.  Fit as a fucking fiddle, as they say.  It is 68 and set to hit 83 with bright blue skies.  Maybe I'll make that march down the Boulevard I keep saying I will make, maybe eating something terrible for me like an eggs Bennie from the French bakery.  Maybe I'll wander through the Farmer's Market and pick up something, too.

Maybe, maybe, maybe.  Enjoy what you can, friends, while you can.  No one ever knows.