The Road of Memories 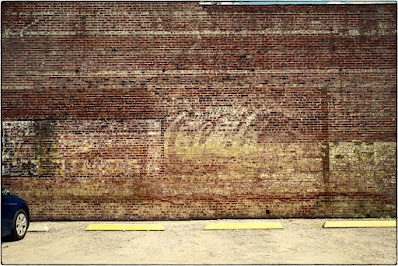 I went to the factory town yesterday to have lunch with my former boss.  It was simply a lunch--no job offer.  We hadn't seen one another for two years and just spent our time catching up.  It was a nice day, a bit chilly when the breeze blew, but otherwise it was pretty.  I had a glass of wine with my mahi sandwich since I was not going back to work as was he.  Then I had another.  This may have irked him, though I'm not sure.  Perhaps he just didn't have the time to sit all afternoon as did I.  But after an hour, lunch finished, we parted ways.

Driving to the factory town put me in a mood.  I spent over half my life there, driving there, working there, and passing by all the old places along the highway made me nostalgic.  I thought of people I had worked with when I first started, before the big stretch of road had become a thoroughfare, when fields and pastures and the occasional business lined the two lane road.  I was making documentaries when the big renovations in the town's structure began, and I remembered interviewing the city's mayor sitting on the back porch of his home overlooking the lake behind his house.  The development was a big concern, and our documentary won a certain almost prestigious prize.

I remembered my professional journey from floor worker to straw boss.

After lunch, I went to a local health food store to buy something my mother wanted, then I drove by the factory.  I retraced my memorized steps through the hallways of the buildings, into and out of offices both before and after the many buildings had been renovated.  I was pretty certain that I would never walk those hallways again.  Somehow, it felt more like exile than retirement.

I decided that since I was this far north, I might as well drive to Grit City and maybe take some pictures.  I made a few stops here and there along the way, getting out of my car with different cameras.  When I arrived at the historic downtown, I parked the car and took a short stroll.  I don't know why, but people stare at me when I am wearing cameras.  I see other people with cameras and nobody seems to pay them any mind, but entire tables of people would turn to look at me suspiciously as I walked by.  Now you may say, "That's just your imagination," or "you think you're special," but once, while still on the sidewalk, when I saw an old, red truck with a Coca-Cola insignia on the door, I stopped to make a couple photographs.  When I had finished and had turned around, a big Black man was walking purposefully toward me.  I turned to greet him.

"What do you mean?" I replied.  He seemed a little aggressive, so I stared him straight in the eyes.

"Why are you taking pictures of the truck?"

For real?  Who in the world gets hassled for taking a photo of a parked Coca-Cola truck.  We exchanged views for a minute before he departed.  I don't know.  Maybe I'm just not supposed to carry a camera any longer.  The cosmos seems to have turned against photo me.

I didn't stop taking pictures, though, and I walked around town a bit more.  Ili lived here for much of the time we were together, though she was rarely at her her treehouse garage apartment.  Some weekends, however, we would stay at her place, and so there was that memory, too, as I walked by the bars and restaurants we used to frequent.

Late in the afternoon, I got back in the car and drove the long road back to my own hometown.  Perhaps it was the wine, or maybe the memories, but I was wrung out tired.  No, those two things are not mutually exclusive.  It was most likely both.

I knew if I went home first, I wouldn't get back out the door, so I drove straight to my mother's.  She offered me a glass of wine as we sat outside for the first time in weeks.  My cousin was out getting her toenails done, so, again, for the first time in awhile, the two of us just sat and chatted.  The longer days and the warmer weather were coming, we said.  Oak pollen would soon be blanketing everything.  My Camelia tree and azaleas were already in full bloom.  Spring was advancing quickly.  A neighbor walking her dog stopped to say hi.  I had finished my wine by that time, and I said my goodbye.  I would go home to fix my supper.  It was early.  There would be lots of time to sit and think.

This would be, at best, a dubious undertaking.