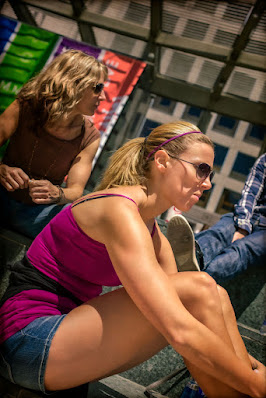 One of the fellows from the factory said I should watch the documentary series, "Cheer."  I doubted it.  But my friend is the best if least prolific writer I have ever known (not read, but known) and is of a weird bent of mind, so one bored and lonesome night, I tried it.  After the first episode, I thought that my friend hand finally fallen to some drug-induced impairment, but the next night, still bored and lonesome, I tried episode two.

I finished season one last night.

I've made lots of documentaries.  I know what it takes to develop them, to get access, to shoot them, and to edit them, so when I watch, it is with a critical eye.  "Cheer" is a vox populi piece, meaning you hear only the voice of the informants.  Choices must be made.  I've never made a series, so I can only imagine how the production changes during the months of shooting.  Some voices may be dropped, others, perhaps, added.  You need to be careful not to "overshoot" or you will have a major mess in editing, though digital media has made that less of a concern.  In the days of film, you only had so much.  Its cost was incredible.  Laying digital information on to disks and cards, however, though cheaper, can lead to other problems depending on how many people you have to work in post.

Out of the forty or so cheerleaders and a number of coaches and staff, they have limited the number of informants to a handful.  As I watched the series, there were obviously some people who had originally been included but events during the team's season led to their exclusion.  I could see that some interviews had taken place "after the fact" in order to fill in narrative gaps that needed explaining.  And, on at least two occasions, the behind the camera voice had to be introduced in order to put statements into context.

As I said, I've made documentaries, and you can't control what happens.  And man. . . did those "Cheer" execs get lucky.  More than lucky.  It is as if there had been divine intervention.  It is as if they had scripted the whole thing, that it is a fictional fantasy.  If just a few incidents were changed, if the squad had not ended up winning the national cheer competition. . . few would have ever heard of it.

But these people picked six winning numbers.  They hit the Lotto jackpot.

I mean--cheerleaders for Christ's sake.  Who wants to watch a show about cheerleaders?

Season Two begins en media res.  In Season One, you knew that these were some really fucked up people, but the whole thing had a fairy tale ending.  How, I wondered, could they even pretend to match it with another season?  At best, it would be a repeat of Season One.  At worst, it would be a repetitive letdown.

But these are some terrifically skilled documentarians.  They hooked me in the first five minutes.  Fuck ups be fuck ups whether it is genetics or socialization.  We like to think people can change, but that has never been my experience.  The trouble is that no one can really see themselves.  Sometimes we get little glimpses, but I think it takes a lifetime and some trauma for one to begin to see what a truly fucked up person they have been.  And then, all they can do is be sorry.  You can't really change.

The thing about making a documentary is that you don't have control of what happens, but you have chosen the topic and the people because, no matter what, you know they are going to reveal themselves.  Read the last paragraph again.  They can't help themselves because they can't see themselves.  Just let them talk long enough.  There is the reveal.  The cheerleader coach, Monica Aldama, must have had stars in her eyes when Netflix approached her about the series, and the producers never put her in a bad light.  But she can't help herself.  Every word, every move, brings more revelation.  It is like watching "An American Family" back in the '70s.  The center can not hold.  Given enough time, things just fall apart.

Monica thinks herself an American success story, a cornfed girl who dreamed of working in the business world in New York but stayed at home and married her high school sweetheart and eventually, through hard work and a sincere belief, found national success right there in small town Texas.

That is the image she wants to project.  But oh, those doc makers knew.  They led her down a wicked path, I'm afraid, not knowing for sure but suspecting where it led.

They are, in some ways, the serpent in the garden.  Having done this, I know. . . it is fairly evil.

I look at things most people pay no attention to whatsoever--like B roll.  B roll is the footage you use to cover up "talking heads" and to make transitions between scenes and episodes.  They were not very inventive in this and should get a "C" at best.  But B roll has its own challenges.  Often, you have to go out and get it during the editing process.

"We need a shot of the cornfield here.  Do we have one?  Can we send someone out to get one quickly?  Oh, shit. . . it doesn't have to be the one in Nebraska.  Any field will do.  Isn't there a cornfield up in Waha?  I only need a few seconds.  If we can just get that one, please.  Anything."

Sitting on the couch.