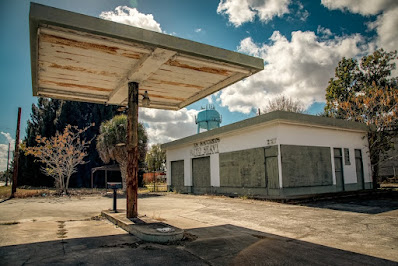 The world of a man in isolation is much different from the world of those who commune.  Every time I go out, I run straight into that divide, and it makes me sad.  As Hemingway said in "To Have and to Have Not," "A man alone ain't got no bloody chance."  That's not actually what he said.  That's what the Puritan Maxwell Perkins made him print.  Perkins wouldn't publish curse words.  Still, you get his drift.

Yesterday began in a panic.  No, not began.  It began as usual, making coffee, reading the Troubles of Our Times, and mis-writing things for you.  Then I had to make some choices.  I was going to do a yoga/stretching routine, but my back hurt so much I did not want to.  So I thought to take a walk.  I thought about it for a long time, though, then too long.  I was meeting some of my folks from my time as factory foreman for lunch up in the factory town.

After showering and dressing, a thing I hardly ever do now, I decided to throw some camera gear in the car--just in case.  My hankering was to take my Leicas, but when I went to grab the camera bag, I couldn't find it.  I looked through the house.  WTF?  I grabbed my keys and looked in the car.  Nope.  I checked all the rooms and closets again.  WTF.  Next, I checked my memory.  Man, I hadn't had those cameras out since I downloaded the images from my trip a couple weeks ago.  Did I?  They weren't with me when I got my car washed.  Were they?  I imagined one of the car wash guys or one of my maids grabbing the bag.

There was nothing I could do now, though.  It was time to go.

I drove out in a resolute funk.  Resigned.  They were gone, I was sure.  I have plenty of cameras, I told myself.  I won't replace these Leicas again.

The group was already assembled when I got to the restaurant.  We moved to a table outside.  I wondered if there would be any awkwardness as this was not a group who lunched together before.  And it seemed a bit stiff at first.  But then the young, pretty, giggly waitress came to take drink orders and said she would bring me beers to taste and things got off to a better start.  We sat and ate and drank and chatted for two hours, and while we did, other factory workers out on their lunch breaks stopped by the table to say hello. I had forgotten what it all felt like, forgotten that I had been a recognizable figure at the factory, an outsider on the inside, someone capable of supporting a cause or of successfully resisting.  My photograph was still large on the splash page for union recruiting even though my position prohibited me from remaining in the union for so long.  Two years alone had stripped me of these sensations.  I felt like an orphan baby who has not been held or touched.  It was almost too much.

One of the positions at the factory is open.  The young fellow who had the job has taken a position with another factory in another town, and my peeps keep saying I should take the position.  Right, I say, I'll just "take" it.  When the fellow who is leaving came up to say hello, I was told that there was the usual Wednesday foreman's meeting taking place and my old boss wanted me to show up and say hello.  So, I said to the young fellow who would be in the meeting, when I show up, tell them I've been shadowing you all week and am up to speed and ready to step in when you leave.  He thought that was a good idea.

But the sun was shining and the beer was flowing and we stayed at our outdoor table longer than we had planned.

"Remember that guy in high school who joined the army and after his six weeks or so of basic training came back to visit with his new uniform and a military haircut and everyone kind of faking being glad to see him but not really wanting to talk to him because they no longer had anything in common with him?  I don't want to be that guy."

I remember retirees coming back to campus to wander the old hallways and everyone saying hello with pop eyes and excusing themselves quickly if they could but some poor asshole would get targeted and the retiree would take a seat in his or her office to begin some strained and awkward chat.

When I pulled into the parking lot, I grabbed my old hang tag out of the console.  Yup.  I still have it.  Weirdly, walking across the lot to the building where my office had been located felt normal.  I still had my factory i.d. in my wallet, too, so I tried scanning the electric eye to see if it would open the door.  The electronic lock beeped and flashed red.  No go.  But my secretary who had been part of the lunch crew suspected it was me and came to open the door.  I stepped inside.

I won't bore you with the rest of it except to tell you what it felt like.  It was like a hallucination that feels perfectly normal.  I sat in my old office on the wrong side of the desk, but it all felt perfectly fine.  And from the hallways, people left their offices and came to chat.  It was as it had been and I did what I always did, and people smiled and laughed and hung around without making up excuses to leave.  In truth, I think I was making sure everything was running smoothly ready to help straighten things out just in case.  I wasn't, of course, but I was. Inherent behavior. . . .

And then it was late.  The workday was over and it was time to go.  As I walked down the hallway, my replacement called me back and laughed.  He said that I had a habit of doing that when people left, just let them get a few steps down the hallway and then say, "Hey. . . ."  It was kind of true.

I walked across the commons with the idea of sticking my head into another building to say hello to another foreman, but as I crossed the span, I ran into some workers who wanted to stop and chat.

It was like that, not unusual but all so normal.  I'd spent a majority of my life there.  I was not nostalgic.  It was that to which I was accustomed.

Driving home down the highway I'd driven almost all my adult life at the time I would usually be coming home from work, the eeriness of it all began to hit me.  I realized how much I missed the "normal" routine, the showmanship of it, the release at the end of the working day, the anticipation of getting to the gym or going home to supper and the settling into evening.

It was the drive home that overwhelmed me.

I called my mother and told her I would not be over, that I was just getting "out of work."  She was happy that I had a good time.

When I pulled into the driveway, I remembered the lost Leicas.  Goddamnit, I really couldn't remember taking them out of the house in the past two weeks.  They MUST be in the house somewhere.  I went to the bedroom and shed my factory clothes and went into the closet.  I looked again.  Nope.  And then. . . the bag had fallen off the cedar chest and was hidden in the crevice beside it.  Hallefuckingluja!  Yes!

The cat was waiting for me to feed her, and so I poured a drink and sat with her for a bit.  What a day.  How weird it had been in not being weird at all.  When C.C. left the factory, he picked up his other career and has been working at it steady ever since.  Me?  I got out just as Corona hit, and I have done nothing.  That is what I thought about sitting on the deck that will be replaced.  I have done absolutely nothing.  I used to be so productive, I thought, working at the factory and then in the studio.  I was cranking all the time.  I must, I thought, become productive again.  Somehow.  Some way.

Sure, I thought.  That's what you will do.

I made an arugula salad with split cherry tomatoes, garlic, and sliced Parmesan.  Kosher salt, olive oil, balsamic.  I opened a bottle of wine.

Then I sat down to watch the news.