Fer It or Agin It 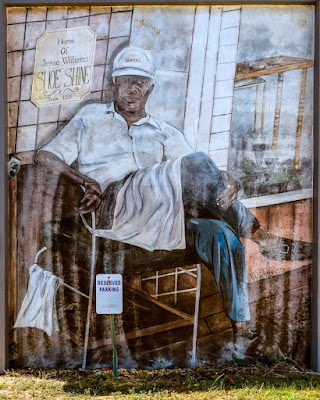 I know.  I'm a day late and a dollar short.  I missed Black History Month with this one.  It's just great how small southern towns celebrate their diversity.  Why is it that small towns are always full of murals?  It seems I missed something.  Was there a contest?  A grant?

But this is just a small distraction.  Fuck Putin!  Kill Putin!

Have you noticed how far away he sits from his Cabinet and Ministers?  He knows.  His life has to be a paranoid nightmare now.  He has to be certain that someone close to him has a plan to kill him.  Sleeping with one eye open, afraid of the food he's served. . . do you think he's crazy?

But things will not continue as we think.  Half of Europe is as crazy as republican Texans and West Virginia hillbillies.  Stupid, mean, bullheaded.

"A fellow was about to take a trip through West Virginia, so he asked his friend who grew up there, 'Do you think I'll need a gun?'  His friend thought for a second and replied, 'You probably won't, but if you do, you're gonna need it real bad.'"

I think that joke pretty much sums it up.  We like to think of Europe as the home of liberal artists and thinkers, but it is full of hillbillies and crackers just like everywhere else.  Well, not everywhere else.  I've travelled some.  It is better not to understand the language in many places.  You don't want to know what they are talking about.  The media always shows a place in times of crisis, and the interviews with residents are reduced to those emotional soundbites that have a universal appeal.  And then the churches and the liberal do-gooders start the "We Need to Help" campaign.  But seriously, we usually don't know who we are helping.  We are just responding to basic emotional pleas.

But you don't know that the woman has an IQ of 85 and was raised by a family of Nazi terrorists.

Jesus!  What am I going on about?

I read an article today about the stress that cultural diversity causes.  Huh.  Who knew?  We act like everyone is a genius and can hold two opposing ideas in their consciousness at one time.  But they are not.  They are more like Texas republicans or hillbillies from West Virginia.

To wit: Things are not what they seem.  The center will not hold.

And so I say--Fuck Putin.  Kill Putin.

The head of the snake and all that.

I think expecting people to be smart is like expecting me to build a deck.  O.K.  I've built them before.  But I am not the same man now, or so it seems.  I've been stressing about mine which is falling apart at an accelerating rate.  "Just start," I say.  "Once you start, you'll keep going."  I say that every time I am sitting with a cocktail and a cheroot on some good part of the deck.

Yesterday, however, I solved my problem.  I hired someone to replace it.  I'm not even going to tear it up.  She is.  She is doing the entire project for about a quarter of the labor cost I expected.  That' right.  "She."  I've gotten the friends and family deal, I think.  It scares me.  She's a straight up hillbilly.  But she builds boat docks and decks on water all the time.  She told me what I did wrong in building mine and why it fell apart.  She has that specialized intelligence you get from experience and knowing what you are doing.  Still. . . I already worry I will not be satisfied with the results.  Whatever.  She is using marine-grade wood which she says is made to resist moisture.  O.K.  I feel a lot of weight lifted off me having made this decision.  A new deck will make me happy.

Check back for an update on that, however.

I went to the nursery yesterday to get replacement plants for the garden I tore up.  I wish I hadn't.  The plants I cut down are not readily available.  I had a bunch of five foot pentas in my garden.  The butterflies and hummingbirds loved them.  But suburban nurseries, I am finding, don't carry that variety.

"I don't think I've had any of those in here for years."

I don't know the name of the other things I cut down.  I looked at pictures I had taken of the old garden yesterday and weeped.  But it will be fine.  Things will grow back.  I guess I'm not big on change.  It may be the "Old Man Syndrome."  Or maybe the "Willy Loman."  Yes. . . I may have The Willy Loman!

"How can they whip cheese?"

Don't worry if you don't know the reference.  It doesn't necessarily mean you are a hillbilly from West Virginia.  It might, you know. . . but it isn't the final determinant.

Today begins "National Women's History Month."  Yup.  Not International.  Not regional.  I'm not sure a month is long enough.  But there it is.

March.  Does it come in like a lion and leave like a lamb?  I believe that's right.

I'm thinking about getting an electric bike.  I'll not need to use gasoline.  I don't really need to go further than a few miles from my house on a regular basis.  I'd get another Vespa, but I can't bring myself to do it. An electric bike, though, I can probably handle.  They have gotten expensive, far too expensive. Biden owes me a government subsidy for this one.  But I get nothing.  Still, I might get that electric bike.

As I said. . . all of this is a distraction.  Russian life was looking much better than it has any time since WWII.  I was hoping to visit.  Now the Iron Curtain descends again.  I feel for those Russians who are at Putin's mercy.