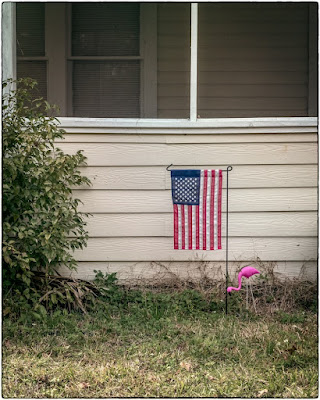 I'm going to get a baker's hat to go with my chef's hat.  Last night, I baked my first thing EVER!  Well. . . not exactly true.  I've baked things like chicken before, but I've never made a pastry or bread.  But I've been missing the stuff Ili used to make for me.  "Poop Bread" I called it.  It was a banana bread made with oat flour, flax, eggs, bananas, of course, and sweetened with maple syrup.  I added my own flourish.  I used a container of plain yogurt to moisten it and added walnuts.  I'm just a baker poet, I guess.

But I had none of that and had to make a trip to the grocery store, recipe in hand.  I'd never been on the baker's isle before.  I stood before shelves for a long, long time looking at the various flours, yeasts and baking powders.  Chopped walnuts, chocolate drops, vanilla extract, nutmeg, cinnamon. . . did I have all that?  Probably, but I was starting fresh.  I needed a baking pan.  I bought a hand mixer and some measuring spoons.  I had those, though, right?  I didn't want to take chances.  Sure, I got some Pinot Noir and a six pack of IPA and a few other things, but when I checked out, the bill was $150!

Fuck. . . this bread had better be good.

When I got home, I lined all the ingredients up on the counter and got out the mixing bowl and measuring spoons (I did have them already), then poured a glass of scotch and sat down to read more of the book on H.S. Thompson, "Savage Journey."  Boy can that Richardson research and write, but it was the Thompson quotes that had me revved.  Thompson was a phrase maker extraordinaire.  There has never been any writer like him.

The scotch made me hungry, so I sliced up an avocado and garlic and put on some lentil soup.  I cracked open the Pinot and sat down to a small meal.  I realized I had not eaten a thing all day.  Then an after dinner drink and some more reading.

Was I putting off making the bread?  I think I was.  I think it felt too overwhelming.

And so I did.  I poured olive oil and maple syrup into the mixing bowl and began whisking vigorously.  Three egg whites, two yolks.

The bananas were not quite overripe, so I had an idea.  I peeled them and put them into the microwave for a couple minutes, then added the yogurt and mashed them up with the potato masher I knew I had.  This went into the mixing bowl for more whisking.  Baking powder, baking soda, vanilla extract, salt, cinnamon, nutmeg, and allspice.  Whisk away.

I had globs of thick goop everywhere.

I opened the general purpose flour and the oat flour and measured them out, one cup each.  A white powdery cloud floated over my floured shirt.  This was really, really messy.  Stirring it in, I added the walnuts and some milled flax.

I poured it into the baking dish.  It looked alright, but I was uncertain.  As a zoology major, my great weakness was dissection.  I am not a patient man.  Removing organs without damaging the mesothelium and the arteries and veins servicing them takes a steady and delicate hand.  I would get frustrated, though, and eventually just rip the organ out with a few clumsy swipes of the knife, thrusting it over my head in triumph and screaming to my lab mates--"Liver!!!!" as if I'd won some speed dissecting competition.

Of course my lab animals were useless when it came time for the lab final.

I was much the same in chemistry, forgetting titrations, spilling beakers and dropping test tubes.  I knew I wasn't made for med school.

But this wasn't med school, this was cooking.  Or rather, baking.  I'm sure my measurements were approximate as I guesstimated amounts often, but, you know. . . I could get lucky.

The preheated oven beeped and I slid the baking pan onto the wrack.  I'd know in an hour.

Of course I had taken a photo of the raw mixture and had texted it to friends.

In an hour, it didn't look done.  I did the toothpick test, but I didn't really know what I was looking for.  So I let it bake more.  And more.  I let it go until I was scared I'd burn it.  I turned off the oven and let it and the loaf cool together for awhile.  I reasoned this was best.

But I was anxious, and in a few minutes, I pulled the bread out.  It smelled wonderful.  Take another photo and send it to friends.  Let it cool. 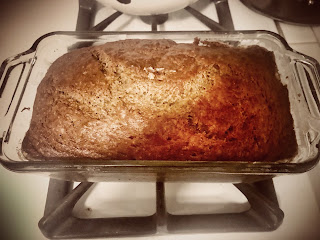 One of the people I sent it to was an old boss who retired before me and now makes cakes.  Another was one of my department members who teaches yoga and is a bit of an herbalist.  Neither was impressed.

"Some things taste better than they look."

What?!?  I thought it beautiful.  How could it look better?

O.K.  Now here comes the hard part of the story.  I had been drinking the entire time, and I decided to try some of the Vermont weed my buddy had given me, so I was a little loopy.  I had been listening to a wonderful jazz station I had created on Apple Music, and it made the rooms sway beautifully.  I was overwhelmed by it all.  I felt joyful and celebratory.  It had been a hell of a day and evening.

I sent the photo to Ili.  Yup. Dis me if you will.  Sometimes you just do things you'll regret in the morning.  I'd broken two of my cardinal rules, one being never text or email when you are drunk and high.  The other one, too.

But at the moment, I was ecstatic.  I could wait no longer to cut the loaf.  The knife sunk in just right.  The bread held together as I mad my incision.  First bite--BINGO!

I had to text that, too.

The herb girl sent a message that she was brewing some California poppy tea.  Sent me a picture.  I Googled it.  It is related to the opium poppy but doesn't have the same chemical ingredient; still it does have something related and is supposed to be good for relaxation and sleeping (link).  I'm going to get some and try it.  It might be better than drinking and texting.

My travel/art friend has not been a fan of my music selection.  He finds the songs morose, he said.  He can't listen to them.  He is not alone.  Many of my male friends think I have too much estrogen judging by my musical taste.  Indeed, I am not a fan of testosterone laced music.  No metal.  No rap.

So. . . let me try to make amends with a song that both Q and c.c. liked.  However, I suspect they both have too much estrogen, too.