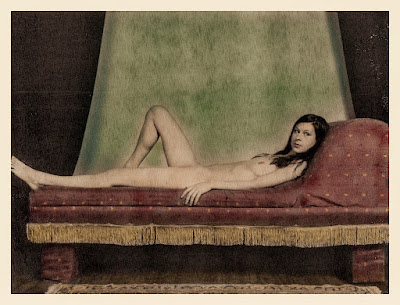 If "words are violence" then what is a photograph?  They are worth a thousand words, right?  This is a picture as much as a photograph, though, manipulated, enhanced (or desecrated).  There is a cold distance here between the observer and the observed, I think, but there are theories that could heat it up.  A languorous pose and an disconcerting stare.

Just a naked lady on a couch.

Would it make a difference if I told you she was a yoga vegan lesbian?  Forced into servitude by Iceberg Slim?

It was her idea.  I just accommodated.

"You have a studio?  Can I come to your studio?"

Oh. . . she was overwhelmed by the dominant social narrative of the time, manipulated by the predominant patriarchal values.

Imagine being a man called "Papa."

Photographs are violence times one thousand.  They are ideological battlegrounds.  Every picture tells a story, but you can't determine which one.  It's about privilege.  It's about power.

It's about Will Smith and the National Conversation.

Chris Rock is doing violence to everyone who has been a victim of physical abuse if he doesn't press charges.  He is practically promoting it.  He'll be like every abused woman or man in the world.  He will have given his consent.

Consent.  There's a concept whose time has come and gone.

There are always invisible pressures.  Free will?  Forget about it. We are Slaves to the Master Narrative.

Which at one time was why we gave license to artists and fools.  Someone needed to give us a contrary vision.

Like Disney.  They have been the most subversive corporation in America.  No. . . the world.

The Right says the Left is the New Establishment.  I can't decide.  I really don't like either one.

These are dangerous times.  It is probably best to keep to yourself and don't say anything.  There is just about nothing that won't stir up a controversy.

It's all Social Media and Fake News now.  Beware the Church.  Astrology has failed us.  The water is poison, the air is fatal.  The icecaps are melting.  We tear at one another now like starving beasts.

Once we thought we had it made, as they used to say back in "the good old days."  But Beckett was right.  He was a savant.

Well that went wrong.  I just wanted to post a pretty picture.  Let's just end with a pretty song.