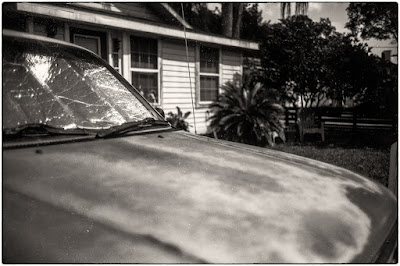 "How do you do it" you ask?  "Where do I find such scintillating subjects?"  You might not believe this, but I just see them when I'm walking around.  I don't do anything special, no manipulations of any kind.  The images just appear to me like magic.  I know. . . I know. . . maybe it's talent, maybe just luck.  Whatever it is. . . well. . . to quote Picasso, "it is what it is."  Or was that Warhol?

No matter.  This is from the roll I shot this past weekend with the Babylon 13, the film I ruined the week prior.  It is a lovely film.  I will shoot with it a lot as long as I can get it.  And as long as I am in bright sunlight.  It's just creamy.

Do you find it odd how sometimes a compliment will send you down instead of up?  How, I mean, you might take it the wrong way.  "Might."  In your paranoia, of course, you can never know.  Q wrote me that "The image you posted today on the blog is my favorite image that I have seen in a while."  Nice, right?  Well, I mean, sure.  But haven't I had nice images?  I liked yesterday's photo, too, very much.  I don't know.  I mean it sounded to me like he was calling the rest of my photos "shit."  He wasn't.  He was being nice.  I'm sure of it.

I've become such a paranoid isolate that I'm somewhere on the deeper spectrum.  My ability to understand social cues is almost gone.

The maids came yesterday around lunch time, so I decided to go out to eat.  I wanted to try a new takeout chicken place in the heart of my own hometown, but when I got there, the sign said they were closed Mondays and Tuesdays.  WTF?  So I went to a place at the end of the Boulevard that I used to like when I still went out to restaurants and sat a the bar.  That was back before Covid, back when I still thought that girls would find me irresistibly handsome and would want to leave their boyfriends or at least resent them for not being me.

O.K.. . . O.K.  That is how I remember it.  But fear not.  That is not how I felt yesterday.  The serving staff was young and hip and the girls were very, very pretty.  A young very attractive couple came in to be seated, and once again I war reminded that I am now Quasimodo.  No one was leaving their boyfriends, at least not for me.  I looked around the restaurant.  There were a lot of "ordinary" people, older couples, people having work lunches, and none of them seemed to be miserable even though nobody was leaving their boyfriend or girlfriend for them.  How do they do it, I wondered?  How can they be happy?  I remember that going out to eat was simply so people could see you.  That is how the pretty young people felt.  Their happiness was untouchable.  The pretty young people smiled at one another.  Everyone else was either invisible or an irritant.  I felt I was in the latter grouping.

You see?  I've fallen and can't seem to get up.  I shouldn't write such things, but let me repeat. . . I have fallen deeper into the spectrum.  I've become more socially inappropriate.

There was an article in the Times today entitled "Sexy Lingerie for Men is Here" (link).  I told my friends that I've been looking for a new income and now this just falls into my lap.  I will become an Instagram influencer.  I will start a line called "Quasimodo's Lingerie: This Ain't Your Father's Underwear."

Q suggested I call it "Daddy's Panties."  Maybe I could have a pair called "Balzac."  I don't know.

Appearing in court to testify in the libel case against his former wife, Johnny Depp said he has never hit a woman in his life.  His appearance, however, suggests that this is all he has ever done.  My favorite quote from the Times article:

“I am not some maniac who needs to be high or loaded all the time,” he said, adding that Ms. Heard’s friends, in fact, marveled at how little effect drugs and alcohol had on him.

I guess his attorney had not prepared him for taking the stand.