To Dream but Not to Sleep 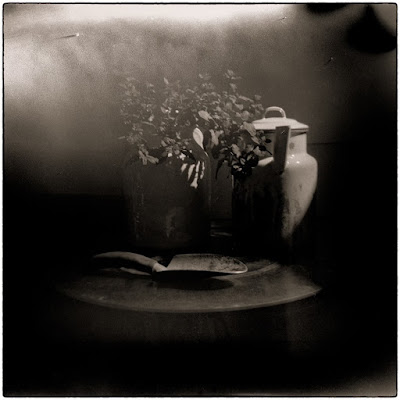 Maybe I was simply thinking.

I had a luncheon date yesterday, but I was stood up at the last moment.  N.G., as the kids used to say, since I had orchestrated my day around lunch.  After the gym, when I got the text, I was flummoxed.  Not in a profound way, of course, but in minor ways.  What to do?  I opened a can of sardines for lunch and drank the rest of the weekend bottle of champagne--sans bubbles.  I showered.  I napped.  When I got up, I thought about shooting more film.  Rather, I sat at the computer and cooked up some I'd shot over the weekend.  Then it was time for mother's.

But really?  That was all I could think to do?

I think my lack of adventure and daring have killed the blog.

The photo at the top of the page came from a roll of film I developed a few days ago from an old Holga camera.  Apparently the film had been in there for years because that is an arrangement that Ili had made.  The Holga, if you don't know, is a plastic toy camera that leaks light.  It has no meter or aperture stops.  You just put in a roll of Tri-X and push the button.  If there is enough light, you get an image.  I am surprised that I was able to see this picture at all.  But damn. . . I love it.

The maids are coming today which always makes me anxious.  I never know when they will be here.  I have to put a lot of things away and wash and dry the sheets before they come.  Then I have to be out of the house while they are here.  I don't have to.  I mean they don't ask me to leave.  But there are five of them busting up the rooms, so it is better to be gone.

All I can come up with is my constant lament--a studio!

That song I posted yesterday stayed with me all day.  I hummed and sang it off and on.  I love Lola Albright in the first season of "Peter Gunn."  You are surprised?  I know. . . right?  A middle aged woman and all.  But there has never been anything like her. . . except maybe Rhea Seehorn in "Better Call Saul."

But I don't think she sings.