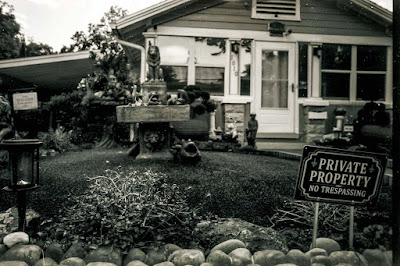 My mother had a good time yesterday.  She took her two neighbors, both women in their 90s who live alone, to the movies.  One is blind and the other is deaf.  But it was free, and they got free popcorn.

My mother is crazy for free things.
She just committed us to Easter dinner with the across the street neighbors, the ones who had us over for Thanksgiving and Christmas.  I have no say in the matter.  I don't want to go, but there is no way out.
"I'm making ham," said the neighbor.
"That's how you know it is a Christian thing," I said.
She looked at me quizzically.
"I mean. . . it's not a seder."
She kept looking at me.
"You know.  Ham.  Jews don't eat ham."
"Oh.  Are you Jewish?"
She looked at my mother.
"Only culturally," I said.
"I can make something else," she said.
"No.  I was just. . . I was just making a joke."
So ham it is.  And some creamed corn from a frozen package, green beans, a pear on a sheet of lettuce with half a bartenders cherry on it.
I'm hoping there is no Easter egg hunt.
Thus is my life.  Not much else.  I baked vegetables last night.  Let me recall: red and green bell peppers, green jalapeño, shiitake mushrooms, broccoli, yellow squash, cauliflower, carrots, red onion, split cherry tomatoes, red potatoes,  and tofu.  Lots of chopping.  Olive oil, salt, pepper, and red pepper, then soy sauce.  Roasted in a pan on the grill.
I'd show you my phone pic of it, but. . . you know.  It was more than delicious, though.  I'm getting really good.  I've decided to make another never-before dish here at home.  Rice pudding.  I always make too much rice.  I love rice pudding but never have it.
Maybe I'll take it to Easter dinner.
Posted by cafe selavy at 8:42 AM