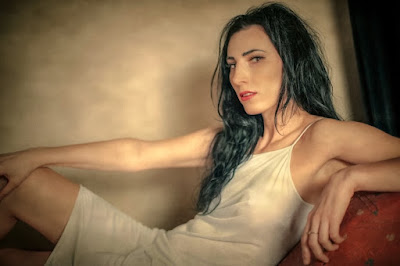 Well. . . some of you saw a post here yesterday that was in the wrong place.  I'm getting careless or senile, I guess.  It was supposed to be posted to Radio Selavy (link).  I've made the correction and it is sitting over there now.

Let's go with a picture of this woman again, a lost file found only days ago on one of the old hard drives.  She was from Romania, I think.  She was actually a working model who did make money with agencies.  She had done a number of local ads and Sunday Supplement type of work.  Of course, she worked with me pro bono because she liked the pictures.  I didn't appreciate her as much as I should have.  Her features were extraordinary and distinctive.  At least for here.  Maybe everyone in Romania looks like her.

It is a very poor country.  I looked it up.  People there are poorer than citizens of the Bahamas.  I should take a trip and see.

Yesterday, I decided to fix my hard drive storage problem with money.  At half past one in the afternoon, I ordered a 12 TB drive from Amazon.  It arrived at five.  $400.  Today, I am putting all the old stuff on it.  Transferring that much data will take a long time, but I've decided how to organize the folders and sub-folders and sub-sub folders.  That, however, will make the moving of data even more time consuming.  Maybe in a few days or a week, though. . . .

Yes.  If you have a problem, just throw money at it.

That is a joke.  I have more problems than money which makes me hate people like Elon Musk even more.

I know, I know. . . that isn't fair.  He always says the kindest things about me.

I made mistakes in processing that photo.  I didn't pay attention to how something I was doing was blowing out the highlights.  It couldn't be fixed.  I will need to go back and begin again from scratch.  It is a matter of practice, something I've done little of in the past few years.  I wasn't really supposed to take photographs.

I'm anxious to hook up my hard drive now, so I'l end this post.  Maybe I'll be cleverer tomorrow.