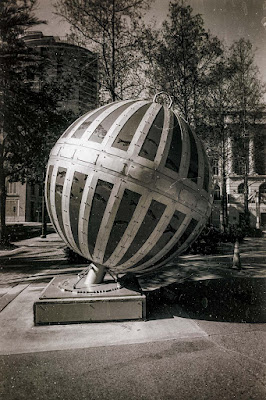 I don't want to write today, but I can't help myself.  I've not felt well for a couple of days now plagued with vertigo and a general malaise.  "Probably a brain tumor," I think, "or some delayed neurological problem related to the accident."

One day, you know, you just don't get better.

But I must power through somehow.  It is Easter and I have to go with my mother to dinner at her neighbor's home.  I will not be my usual jolly self, I fear.  I just want to sit in the dark.  Movement is not my friend.

It hit me hard yesterday.  I got up too early, read, wrote, and went back to bed.  When I got up again, however, I felt no better.  It was a bright Saturday morning.  What to do?  I grabbed my Leica and loaded it up with the Babylon 13 film that failed so badly last weekend.  Using a different camera, I would try again.  But when I got into the car and began to drive, the vertigo would hit me in spurts.  I would grip the steering wheel trying to regain some balance.  My gyroscope wasn't working.  This happened several times.

I parked the car and got out.  The day was already warm and my lower back was killing me.  I was an essential mess.  But I walked.  And walked.  I covered some of the same territory that I walked last weekend, but there were no hippie celebrations to see.  The streets were dead.  I looked for light and shadow and shot the same old stuff, houses, shopping carts, reflections.  I just wanted to see if the film would be better exposed by the meter in the Leica.

By the time I got back to the car, I had sweated through my t-shirt.  I was weak, and I was hungry.  I wanted breakfast, but I could think of no breakfast restaurants I wanted to attend, so I stopped at the grocery store.  Fresh sliced bread from the bakery.  Small sausages.  What the hell.  Orange juice and champagne.

I pulled into the driveway.  It was all I could do to exit the car.  When I got inside, into the cool air, I dropped the bags and fell onto the couch.  I didn't have the energy to cook.  I made a mimosa.

In a bit, I felt I could make breakfast.  Four sausages, three eggs, two pieces of toast slathered with blueberry preserves that had been in the refrigerator for at least three years.  But the are "preserves," right?  They should be fine.

Goddamn, breakfast was good.  Really good.  But it made me feel no better.  Just the opposite, maybe.  I piled the dirty dishes into the sink and went back to bed.

I didn't sleep well.  I tossed and turned and rolled around as I had the night before.  When I got up, it was almost time to go to my mother's.  I wanted to develop the film I had shot.  I started getting things together, though, and realized I felt like shit.  I decided to shower instead.

And then I went to mom's.

The sausage had not cleared my stomach yet.  The whole meal was "riding high" in my gut.  I still had vertigo.  I was not much use as a guest, and in a bit, I said so long and headed home.

I didn't feel like eating and decided I would just snack on raw cabbage.  When it got dark, I turned on t.v.

I feel no better this morning.  I didn't sleep well, and I feel listless.  No joie de vivre.  No elan vital.  No Easter egg hunt for me.  I want to go back to bed.

I have no idea what the object in today's photo is.  Some kind of weird sculpture/monument I photographed in downtown Gotham last week with the bad film.  Again, you can't see the image on the film, even on a light table, but somehow through technological wizardry, I was able to pull one out.