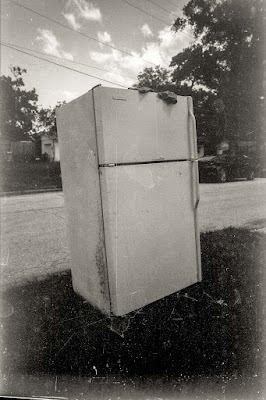 Easter. . . come and gone.  It was the least Easter I have ever had.  I'm not complaining, I'm just saying.  I, as reported, was on shaky legs, and I got nothing for my mother.  Not flowers, not candy.  I sent out nothing in the morning and got nothing back in return.  My inbox was quiet all the live long day.  Eerie?  Just a bit.  I wondered about it only at the end of the day, wondered what others had done.  Not much, but some.  I thought maybe they had spent the day much as I had, without luster or fanfare.  Did children hunt for Easter eggs or did they spend their day playing Minecraft?  Did parents put together elaborate Easter baskets?  Would kids even take notice?

I stayed in bed most of the morning.  That is what I needed to do, I think.  I got up a little past noon only because I had to get ready to drive to my mother's and cross the street to eat with the neighbors.  I had time to develop the film I had shot on Saturday and hang it to dry before I crawled into the shower and got dressed.

Dressed?!?  Yea.  For the first time in over two years, I put on a button up shirt.  It was not one I had worn before.  When I was run over, after I left the hospital, Ili had gone out and bought me some crazy short sleeve shirts from Walmart or Target or someplace.  I couldn't get dressed, really, and she thought short sleeve shirts would be easier for me.  Forget that I never wear short sleeve button up shirts for aesthetic reasons.  They were still too difficult to put on, so I continued to slip on v-neck t-shirts pulling the left sleeve up over my left arm and then having her pull the rest of it over my head.  It was the easiest and least painful thing to do.

I'm still wearing v-neck t-shirts, but I never wore the three short sleeve button ups.  I kept them though.  I guess Ili had a bit of a hipster taste, for the shirts have their own special charm.  At least for me.  They are patterned, something else I avoid in shirts, and they are in fairly outrageous colors.  Yesterday, I put on a pair of my Japanese pants and decided to try one of the hipster shirts.  It definitely did not look like me, but what does these days?  I stood awhile looking at myself in the mirror.  The longer I looked, the more I liked it.  Did that mean I was getting old?  Did I just not give a shit anymore?  Was it ever wise to care in the first place, all that dodgy egotism of the dapper dandy I never was?

Fuck it.  I was only going to my mother's neighbor's house.  If that wasn't the best place to wear this carnival outfit, I couldn't think of a better one.

I was fairly decorated in pastel Easter colors.

If the neighbors were shocked, they didn't show it.  Dinner was the four of us, and as it turned out, none of us was feeling well.  The hostess was wrecked on alcohol and pills, her Easter shirt tied at the waist, her white jeans falling off her skinny ass.  She stumbled and mumbled around setting out little plates of olives and pickles and crackers and baked brie.  I had brought a good bottle of Pinot Noir and there was beer and Champagne and whiskey if I wanted it.  While the host busied himself in the kitchen, the three of us sat in front of a huge television broadcasting a baseball game across the room.

"I hope you don't mind baseball," called out the host.

Chit-chat across the dinner table, one after dinner drink, and my mother got up to go.  Good Old Mom.  I think everyone was relieved.

It was four-thirty when I left my mother's house.  I looked forward to the quiet of my own house, to sitting with a whiskey and a cheroot on my deck and watching the passing parade.  But there was no passing parade.  No one, not a single soul, was on the street.  It was eerie quiet.  The cat showed up for her evening meal, but that was all.  My phone was silent.  The world was queer.

When the second whiskey was gone, I went back into the house to read.  The air outside had been tropical all day, not that crisp, dry spring air we were lucky enough to have for the past few weeks.  The air conditioned capsule of the house felt fine.  I picked up a book on Hunter Thompson that was taking me far too long to finish.  Oh, but wait!  I remembered I had negatives hanging in the bathroom to dry.  I jumped up and cut them into six frame strips, putting them in the plastic sleeves to hold them, then took the first two to the scanner.

So. . . it was not the camera's meter that fouled those last two rolls of film I so lamented all this past week. Nope.  It was user error, and not in the camera.  When I mixed the chemicals to develop the film that day, I realized that I had only put in one tenth the amount of developer required.  It is a liquid developer that you mix with water in a 31:1 ratio.  I never use that developer, but it is what the film calls for.  I'm not much of a chemist any more, I guess, because I had only measured out 1/10 of an ounce rather than the full ounce.  Why?  Because I am a dunce.

The negatives I developed that day were more than fine, and I was more than pleased.

For the next few hours, I read and scanned, read and scanned.  And then the Great Storm came.  Suddenly there were cracks of lightening and ground shaking thunder.  The sky just opened and dumped.  I haven't looked to see, but it must have rained five inches in an hour.

I just looked it up.  I was right on the money.  Yup.  It was a real monsoon.  We are in for it now.  With the ground soaked and temperatures going up, the humidity will become unbearable.  I've decided to bear it.  I just don't care.  Let people complain.  I'm going to walk around with a sweat-soaked t-shirt without grousing.

Or maybe I'll go someplace where the weather is drier.

A quick look at yesterday's scans gave me pleasure.  I will cook them today.  But my first impression was that the shots were mundane in a wonderful way.  I mean, they are a somewhat intriguing.  They are just bits of the American life as it exists now, with American flags and no trespassing signs and yard trash and cars parked in suburban streets.  My eye was working, I think, even with the most common things.  We'll see.  As I say, today I will cook them up.  Or some of them.  If I have time.  The work week has begun.  I must go to the gym, then come home and get ready for a luncheon date with two kids from the factory.  They are going to play golf at the little nine hole course in my own hometown, then meet me at my favorite Spanish restaurant.  Their choice, not mine.

And then, I'm sure, I'll be exhausted and maybe tipsy, and I will want a nap.  Then it will be time for mother's.  Then. . . home for a cocktail and a smoke.

Jesus.  Like everyone else, I'm back to the old workaday grind.

But it's spooky, this silence.  My vertigo is waning, however, I do believe.  Maybe the world will spin back into place, too.

Peter Gunn is a suave, well-dressed private investigator whose hair is always in place and who loves cool jazz. Gunn operates in a gloomy waterfront city, the name and location of which is never revealed in the series. He can usually be found at Mother's, a smokey wharfside jazz club that Gunn uses as his "office", usually meeting new clients there. Gunn's girlfriend, Edie Hart, is a sultry singer employed at Mother's,