I would absolutely buy a book made up entirely of pictures like this.  Such, my friends, is True Photography.  It puts you "in the moment."  It tells a story.  It documents an event.  It flatters the participants while ridiculing them at one and the same time.  It lets one know who "these people" are the moment you walk into their home and see it.  You know exactly what sort of evening you are going to be in for.

To wit: I promised Dad that I would not write things like, "Here's a picture of a man touching a boy."  No mention of Sandusky.  Mom might be reading.  Of course, she's left out of the photo.  This is "man's" stuff.

This is in reality a picture of Coach and one of his players.  A.A. has really helped.

"I kid," as the comedians say.  Q sent me this photo with an acknowledgement of how much I would enjoy it.  If this were a video, it would go right next to "Larry" (link).

In the national news:

The Princetonian also reported that Dr. Katz had made at least two other women uncomfortable by taking them out to expensive dinners — and in one case by commenting on the woman’s appearance and giving her gifts. All three women were identified by pseudonyms and could not be reached for comment.

The dastardly Katz!  The Times had to also report:

Ms. Gold, 27, who is finishing her Ph.D. in classics at the University of Cambridge, graduated from Princeton in 2017. She said that she had been his student, but that there was no romantic relationship between them at the time. They married in July 2021.

They point out that Katz is 52.

Ageism.  Sexism.  The key is to be against things, most things, anything.  Just let people know how you feel.  Let them know you are uncomfortable with what they are/do/say.  It is important to have an opinion.

No segue.  I had several deliveries yesterday. 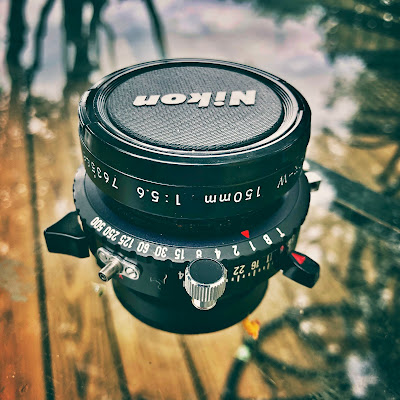 My very own lens for the 4x5 camera arrived.  It's a real sweet lens.  I ordered another that is coming from Japan in a few days.  And I have my eye on one more.

I also got hundreds of dollars worth of 4x5 film.  I'm balls deep, I guess.  I've even been flirting my friend from the factory into letting me have her three teenage daughters sit for me.  I guess I shouldn't say "balls deep" and "teenage daughters" in the same paragraph.  I probably shouldn't say "balls deep" at all.  But I'm done with all "that."  I want to make sweetly procrastinating photos, nothing provocative.  Things like that picture of Coach and Player.  Real Owen/Mills stuff.  The old Sears Portrait Studio.

That's why I am spending all this money.  Ha!

Oh. . . I didn't go to my dinner party last night.  The hostess had a fever in the morning and felt ill.  The dinner was cancelled.  Thank God.  Had she not felt ill until today, I would have been infected.  Covid is on the rapid rise once again in my own home state.  I guess my training as a depressive monk will serve me once again.  I may get my second booster sooner than I planned.

Instead, I made my own dinner--avocado salad, lightly breaded, slightly fried cod pieces over jasmine rice and broccoli, and a bottle of Vouvray.

Yes.  I wanted a bottle of Riesling but I couldn't find one at the grocery store.  I did see, however, a Vouvray and remembered it as a sweetish wine.  The last time I had it (the only time) was at my wedding reception.

It rather complimented the dinner.  A bit sweet, but nice.

We've had three weeks or so of the Heard and Depp Show.  It is almost over, sadly.  It has become the most watched thing on television.  I don't know that for a fact, but it seems true enough.  The case was simple--did Amber Heard's #MeToo op ed slander Depp and cause him a loss of income.  The resulting trial, however, was a shit show of horrors.  But it has been informative in a larger sense.  Who do you believe?  Because that is what it comes down to.  Which fucked up addict's tale is true?

There is no way the jury is going to give Depp 50 million dollars.  But God, thank you for this.  It has filled my lonely life with hours of recollection.  They should make every kid coming of age sit through a class dedicated to the showing of this trial.  Perhaps we could keep people from acting like shitheads to one another.

O.K.  Again. . . I kid.  In my experience, nobody ever learns anything.  We are blind, stupid animals clawing our way through the dark jungle.  It's best to stay away from others and to keep your hands to yourself.

This was an absolutely addled post.  I have only regret and the simple excuse that I didn't sleep well last night.  But, as any idiot will tell you, it is what it is.