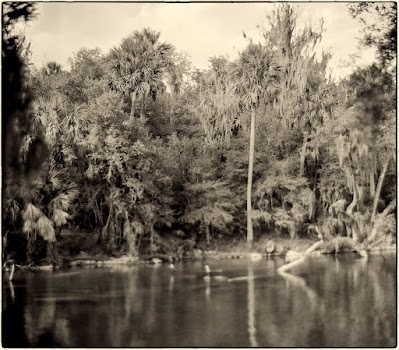 I have a busy weekend.  It freaks me out.  None of it is anything special, just two nights of dinners and drinks and conversation.  I've spent so much time alone now, however, making commitments like this feels stifling. They are not productive in any way but merely distractions from the ultimate lonesomeness that afflicts us all.  I never want to do these things, but afterwards I am almost always happy that I did.  But tonight, I am having dinner with the people whose kids gave me Covid last time I went to a dinner party indoors.  Covid is on the rise here.  I pray that I won't get it again.

After this, I'm declining all invitations to go indoors.  The great outdoors. . . that is where I will be.

With the rest of America, apparently.  You can't get into a National Park this summer.  You need reservations.  Wild, right?  Anything that has to do with the great outdoors right now is expensive.  Q wants to buy a Winnebago.  They have gone up in price.  You would think people would be giving them away now that gas prices have skyrocketed, but Q tells me that is not the case.  I know you can't buy a small camper for anything close to pre-Covid prices.  Usually the price has quadrupled.

One of my new "friends" from the gym is going on a hiking trip to all those great Four Corners parks--Bryce, Zion, etc.  Oh. . . he is inappropriately wealthy.  He probably was able to skip the line somehow.  I am unconscionably envious.

The weather has gotten ridiculous here.  The low last night was 75.  In fucking May!  I am in a hurry to seal my new deck.  The rains have just begun.  I need two days of dry weather, I think, before I put a coat down.  Today may be the day, but I will have to do it early or die.  That means rearranging my Rain Man schedule.  Uh-oh.

But it must be done.

After that, I will be fairly free of "must dos".  Fairly.

The photo at the top of the page is from the Liberator.  I just developed it.  The negative has been sitting in the car for months.  It's a cool picture.  I hauled that big f'ing camera around the park and took maybe six images.  It is a beast.  So I bought the new Chamonix.  It is much lighter and folds up into a small footprint.  I put it, the lens case, and six film holders along with the small tripod into a school-sized backpack.  Easy to carry.

But. . . setting it up, pointing it in the right direction, getting under that dark cloth, framing the upside down and backwards picture, checking the levels and making adjustments, focusing, taking a meter reading, setting the shutter speed and aperture opening on the lens, dropping in the film holder, pulling the dark slide, tripping the shutter, putting the dark slide back in. . . Jesus.  What was I thinking?  It takes about ten minutes to take a photograph if I am quick, and half the time I fuck it up.  There are so many ways to fuck it up.

I got a focusing loupe yesterday.  It helps, but I shot four images using it and none of them were great. 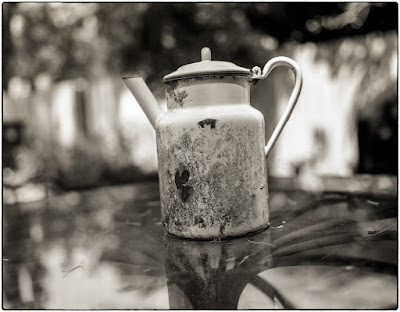 Here's the infamous coffee pot.  It is the only one of the four where I really hit focus.  But look.  I forgot to check the levels.  The photo is irritatingly off-kilter.

The Chamonix is BEAUTIFUL, but it has a very distinct usability and purpose.  Landscapes and portraits.  That is what it is good for.  So, yea. . . I can take pictures of trees and shit.  Maybe I will go out of town where nobody knows me and find a good urban scene and wait for people to look at me so I can ask them to stand before the lens.

God knows what I was thinking about when I bought it.  I spent yesterday making a few pictures, developing film, loading film holders, scanning, and doing post-production on the computer.  This coffee pot is the result. 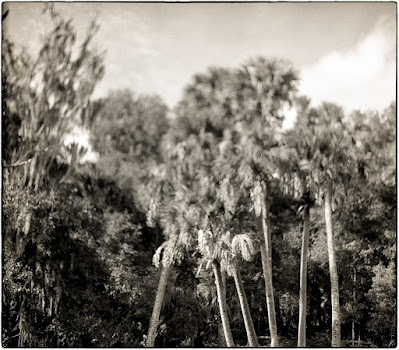 The Liberator may be heavy and horrible to haul around, but at least you can frame, focus, and shoot fairly quickly.  I mean within a minute since it is not on a tripod.  And that lens. . . you can't beat it.

So. . . maybe don't tell Q any of this.  I will try to Tom Sawyer him into buying the Chamonix from me.  He'll do it.  He has lots of money.