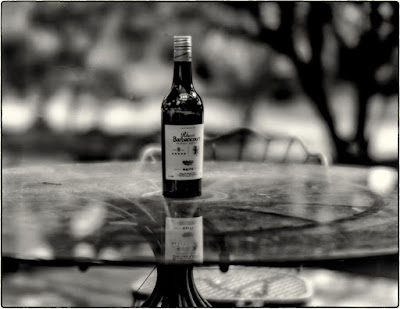 There has to be something wrong with you to want to shoot large format film.  You must be terribly flawed.

That is my takeaway, anyway.  I thought this Chamonix was going to make things easier, if not easy.  And it is in many ways.  I can fit the camera, film holders, lenses and small tripod into a school backpack, so toting it is easier, at least.  To take a photograph, all you need to do is take out the tripod, extend each one of its legs to the right height, unbox the camera, put the plate attached to the bottom of it onto the tripod head and lock it in, open the back of the camera and lock it, set up the front element in the right position for the lens you are deciding to use, take the lens out of its carrying case and attach it to the front of the camera, look at the rear screen and screw the focusing knob until you have an image, frame the shot and balance all the bubbles so you have a straight horizon, pull out your focussing aid and go under the dark cloth to finish focussing, get out a film holder and put it in the back of the camera without shaking or moving it too much, close the lens, use a light meter to get the correct exposure, set the f-stop and shutter speed, remove the dark slide from the film holder, press the shutter, and replace the dark slide.

As long as you didn't forget to shut the lens before you took the dark slide out of the holder, or as long as you didn't move the camera when you put the film in the back.  That is, if you have a holder that you have actually loaded with film (which is a pain in the ass) and as long as you haven't forgotten which side of the two sided film holder you just used for making the picture.

And then, you just reverse the process, putting everything back in its case, and just like that, you are off to take your next photograph.

I decided to use a rum bottle instead of the coffee pot for yesterday's trial run.  Isn't that something?  It would be if the fucker were in focus.  Correction--it IS in focus, just not on the label of the bottle.  Somehow, the focus is slightly behind.  Huh. 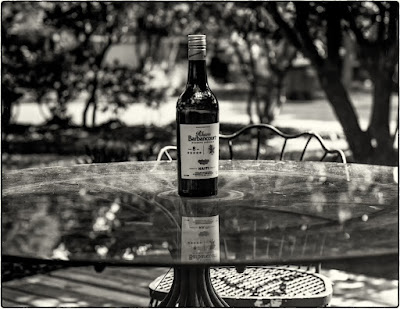 I did a second shot with the flip side of the film holder.  Fortunately, I did it right and don't have another double exposure.  This one has a smaller aperture meaning it has greater depth of field.  No matter.  The fucking label is still somehow out of focus.  Well. . . not somehow.  I don't know.  At this point, I just don't.

I took my new lenses and camera to my buddy's repair store yesterday.  One of my new lenses doesn't fit on the camera.  I need a new lens board.  So we chatted about what to do.  Then I had another of my new lenses fitted onto the right lens board and bought caps for another lens.  After that, I headed to my car, but I saw the light falling nicely on the chairs in the courtyard and thought, "you need to practice. Pull out your stuff and take a picture."

And I did.  It was hot, and quickly I was sweating.  I set up the tripod, attached the camera, put the front standard in what I thought would be the right position, attached a lens. . . . etc. 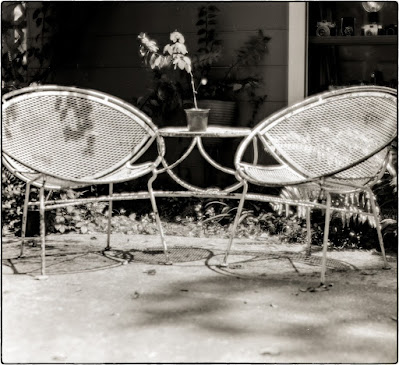 When that was done, I changed  to another, wider lens.  But when I picked up the film holder, I had forgotten which side I had just shot.  Oh, there is a good way to tell--IF you load your film properly.  There are two sides, of course, to the dark slide.  One has a white top and the other a black top.  When you put in fresh film, you put the white side of the slide face up.  After you take the photo, you reverse the slide to show the black.  Brilliant.  Only I hadn't paid attention when I loaded the film and so they were randomly black or white.

50/50 chance, I put the film holder back into the camera. 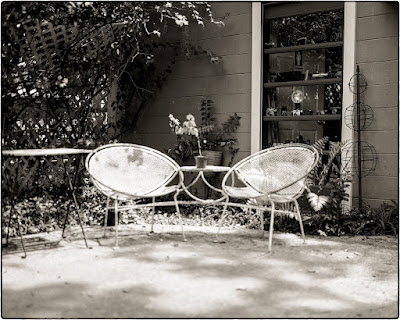 When I finished, I packed up all my stuff.  It had probably only taken me twenty minutes to make the two photographs.  I was wet through and through.

When I got home, I took the film holders to the garage to load the film into the developing tank.  Then, I loaded them with new film.  And THIS TIME, I was clever.  I put the white side of the dark slide out.  Yes!  Small victory.

I trudged back to the house with the developing tank and looked up the developing times for the film, poured in a dilute mixture of Rodinal, and stood at the sink rotating the tank every 30 seconds for ten minutes.  Then rinse.  Then fix for another four.  Then rinse.  And then. . . hang the negatives up to dry.  All FOUR of them.

At least there were images on them.  That was good.

I got ready and headed to my mother's house for my daily chat, then came home to make a meal of cod, broccoli, and rice.  While the rice and broccoli were cooking, I poured a Cuba Libre, but it wasn't what I wanted.  I poured it out and had a glass of wine instead.  Slowing down the old alcohol intake, I thought.  Dinner plated, I sat before the television and watched clips of the daily Heard/Depp trial.

I cleaned up after dinner and decided to check the hanging film.  It was dry.  So I loaded two negatives into the negative holder that went onto the flatbed scanner, set up the parameters, and set the machine to work, first one negative, then the other.  Then I put the big negatives into plastic protective sleeves and went back and loaded the next two.

When all of that was done, I pulled up the images in Photoshop.  And that is when I saw--THAT IN EVERY PHOTOGRAPH I MISSED FOCUS!

Somehow, I managed to focus just a bit further back than the mesh of the chairs.

Yes, there has to be something wrong with you to want to do this.  Very, very wrong.

I will shoot more film today.  No worries.  It is free.

Why, dear lord, why?

My goal today will be to hit focus.  Every day, a little closer to perfection.  I won't give up until I have figured everything out.  Maybe it will get easier.