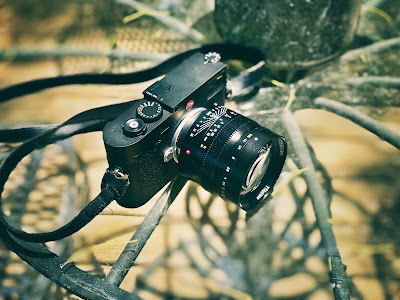 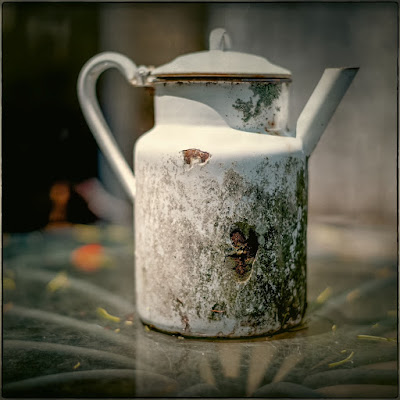 Ah. . . look at that.  It does what it advertises.  Yup.
I spent the entire day with that lens and the Chamonix 4x5.  Entire.  I developed the four shots I took the day before.  Went to the tent and loaded film into the developing tank, then took all my empty 4x5 holders and filled them with film.  Then I developed what was in the tank. 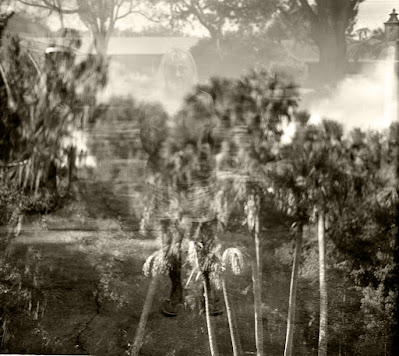 Here's part of what I got--a double exposure.  That's mom at the top of the palm trees and under the oaks.  I have a bunch of film holders with film in them.  I don't know which have been exposed and which haven't--obviously.  I need a better system.  I do this far too much.
The other film I developed turned out to be from my Liberator camera.  I used it many, many months ago when I went to a state park.  I never developed the film.  I'll post those photos later.
Like you are holding your breath. 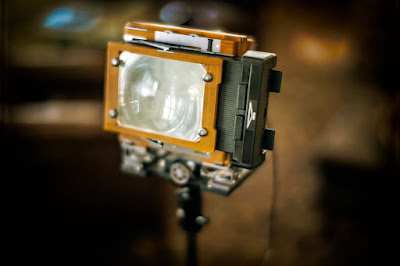 I shot some old Fuji Instant film with the 4x5 to see if I was getting good readings from my new phone app.  That is the big holder for the pack film you see in the Chamonix.  The film is many years old and faded, but I could tell I was getting accurate readings.  Of course, this photo was taken with the new 0.95 lens.
I ran those back to the computer to "cook them up."
Then I ordered a lens for the Chamonix.  Now I have one of my own.  I also ordered a four inch magnifying loupe so that I can focus on that (as you can see) shiny ground glass.  It is almost impossible to do with the naked eye.
The Money River is flowing.  I need some ebbing, too.
I reached the end of the day without having ever taking a shower, without changing clothes. . . .  I called my mother.
"Ma. . . I won't make it over today. . . . "
"That's alright, honey."
I feel badly, though.  I have dinner with my replacement at the factory's house tomorrow night and dinner with the famous German film director on Saturday.  What am I doing. . . trying to have a life?
As soon as I finish up here, I am going to develop the film I shot yesterday.  My fingers are crossed.  I don't want to lose interest in this new camera on day two of owning it.  Let there be images.  Let them be in focus.  At least some of them.  Is that asking too much?
I get my focussing loupe today.  I get my new lens tomorrow, and another next week.  Oh. . . and I ordered a bunch of 4x5 film that will arrive tomorrow, too.
It is entirely possible that. . . oh. . . no!. . . I don't want to think of that.  I don't wish to admit failure already.
"Hey, Q. . . you wanted one of these fancy assed Chamonix cameras, right?  Man. . . I've got a deal for you. . . . "
O.K.  Much to do today.  Miles to go, etc.
Posted by cafe selavy at 8:26 AM