Nailing Focus and Other Mysteries 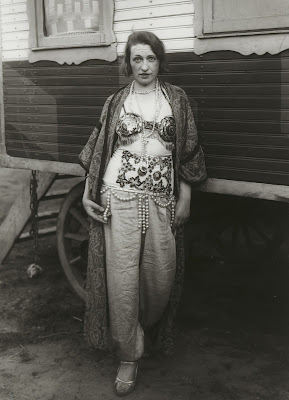 Little by little, things are coming together with the big camera.  Yesterday, I set up a couple more test shots around the house, took my time, and hit focus!!!  That may not sound very exciting to you, but I had begun to worry that maybe some critical tolerance was off with the plate holder, that what was focused on the Fresnel screen was not focused on the film plane.  But that fear is gone now.  I took this photograph yesterday.

No, not the one above.  That was done by August Sander.  You may remember that I spent a ton of money and bought a huge book of his portraits.  For me, he is one of the most intriguing photographers around.  There are many famous large format photographers, but no one photographed as many people as Sander.  Steiglitz, of course, famously photographed his wife, Georgia O'Keefe.  Edward Weston photographed his girlfriends, sons, servants, and a few of his friends.  Ansel Adams hardly ever photographed people.  Eugene Atget is, of course, famous for the thousands of photographs he took of Paris, but there is hardly a portrait there.  Sander gave rise to later photographers like Arthur Penn who did it so well, and later Richard Avedon.  And, of course, Fran Leibowitz and her view camera photography for Vanity Fair. 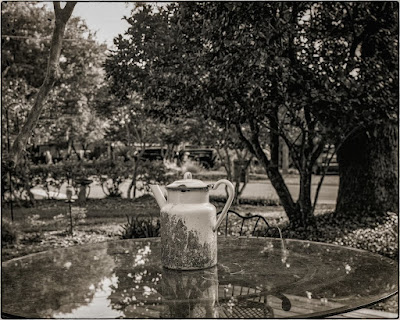 The Infamous Coffee Pot!  In focus!  Sharp.  I'm getting close.  Soon, I may have the confidence to shoot people.  But I need to be certain about everything.  There is nothing worse than having someone take tine to be photographed and then end up without a photograph.  I need to nail these things every time.  It must be so. 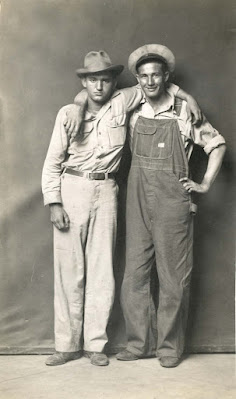 He certainly did a lot of portraits, too.  As did Dorothea Lange and Margaret Bourke White, also with larger format cameras.  Both Disfarmer and Sander shot on glass plates.  That is my next test today.  You remember.  I've done it fairly unsuccessfully before.  Not today.  I'm gonna kill it.

I hope.  You'll know by tomorrow.

Then. . . I'll be on the prowl for victims.  God knows if I'll have the chutzpah to do what I have in mind.  It takes a certain je ne sais quoi to approach strangers with a 4x5 camera on a tripod.  It can be fairly dangerous, I've found, with smaller cameras.  Just the other day, I was walking with my Canon camera loaded with Babylon 13 and saw light hitting a second story balcony.  I pointed my camera and shot.  Took me maybe three seconds.  As I walked away, a woman came running out of the house screaming at me.  I stopped and smiled and walked back to where she stood.

Oh, boy, she was ready for reality t.v., this lady.  I continued to smile and pointed to the balcony.

"Yea, look at the shadows and the light."

She quickly glanced.  She wasn't enamored by it, I think.  She was more interested in standing her ground.  Righteous, she was, in her indignation.  I smiled and waved and walked away.  I should have told her I was working for Google.

Photography has become a pernicious plague upon the planet. People taking photographs deserve to be punished.

I packed the camera and gear and took it with me when I went to lunch yesterday.  Afterward, I decided to drive to a ramshackle outskirts of town that I have photographed before.  But it was mid-afternoon.  It was getting unbearably hot, and the light was flat and dull.  I drove for awhile looking for a place to set up my gear, but I never stopped.  The streets were busy and the people poor.  Not just poor, you know, but of a criminal I.Q.  If I am getting yelled at by fancy women in the rich part of town. . . .

I'll go back some early weekend morning when the light is nice and the ragged people are asleep.

Oh, I know.  I am joking.  I love all people.  I've just been trying to write descriptions of people I see.  Yesterday, a girl and a boy walked into the restaurant just as I was paying up at the bar.  He was a bit ragged, a scraggly beard and unkempt hair, a sort of sallow, sickly pale that matched his thin physique covered by what I guessed to be a second hand racing jersey of some kind.  She was short with long, thick hair.  She wore glasses that were too large for her face, the kind that might have been worn by Charles Nelson Riley in the 1980s.  But she had cheekbones that wouldn't quit and thick, pouty lips that framed her slight overbite.  She wore old clothes, some off-brand jeans, and a beat pair of old hightop Chuck's.  I watched them as they found a table and took their seats.  She seemed very happy, near giddy, and when she took away her glasses, she was gorgeous.  She and the boy seemed very happy, and I wanted to ask them about their lives.  They, like me, didn't seem the types to be spending fifty or sixty dollars on lunch.  I wanted to sit with them and listen.  It might, I thought, clear up one of the mysteries of life.

Oh. . . there was one problem yesterday. 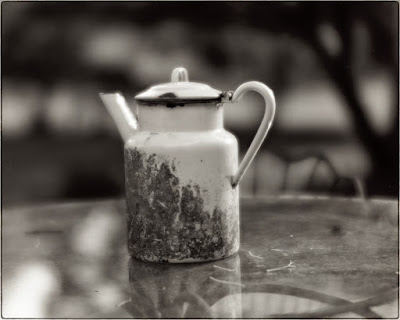 I took this with a 250mm lens. It glows.  There is a penumbra of some sort surrounding the white of the pot.  This was the same ghostliness as I saw in the picture I took the day before of the wrought iron chair.  I'm not sure what is going on with that.  I will ask my camera repair buddy, but I may have to send this lens back.  On the one hand.  On the other, you know, it is sort of a "glamor glow," something I might be able to work with.  I haven't decided yet.

O.K.  I want to develop more film from yesterday and shoot some glass plates in the morning light.  It is Friday.  The long weekend is upon some of you.  Me, too.  I'll need to plan hamburgers and hot dogs for Ma.  And maybe some portraits, too.