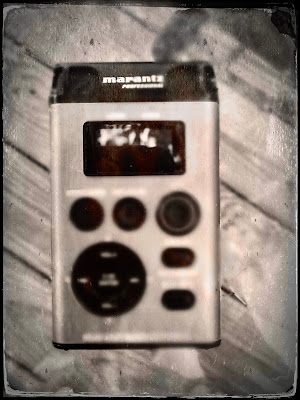 "Take a note--Jeremy's House of Pancakes."

"A young woman in the dirt front yard of a bunny hutch home badly in need of painting checks her mailbox.  She is pretty and stylish in her way--a horizontally striped shirt under bib overalls rolled up to her calves.  High tops and curly hair in a poodle cut a la Suzanne Pleshette."

You see what I mean.  I'll knock out that new novel in no time.

I spent the day "doing" photography.  "Doing" it like a job.  All day.  I think I have things mostly in hand now.  I've worked through all the old film holders, developing some that were blank and some that had images on them, and I shot some that I thought were blank and got double exposures.  But that is all over now, for the most part.  I've emptied and loaded the holders correctly this time.  The white part of the dark slide faces out now so that when I shoot the film I can reverse it and have the black side facing out to let me know the film is exposed.  No more guessing, no more double exposures.  And I know what film is in each holder.  In the past, I'd shoot with the 4x5 until I was frustrated and then leave it sit for months.  I never really got the process down.

I still don't know how I'm going to feel about it in the end, but I am not going to quit until I have gotten everything to the point that I know I can make good negatives.  Not necessarily good pictures, but proper exposures.

The "good picture" part is not so easy.

I shot some glass plates yesterday.  It didn't turn out too well. 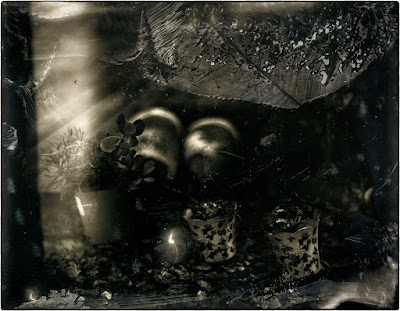 I shot the plates at box speed which turns out to be a mistake.  It is not as sensitive as advertised, and from now on I will overexpose the plates.  This one was shot with the Liberator.  There is an image there, and I can see that it is in focus.  But there is the light leak on the left side and a bunch of bad emulsion at the top right.  I will shoot some more with the Liberator today to see if the light leak is just inherent in the camera.  If so, I will have to send it back to John Minnicks for repair.  Or let him repair and sell it.  The camera has been a lot of trouble. 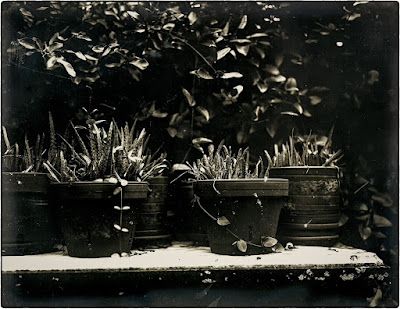 This one was shot with the new Chamonix.  Focus was right on, so there's that.  The plate was terribly underexposed, though, which is why it has such a short tonal range.  I was able to pull an image off the scanner and cook it up, but there is little detail.  I don't know if you can see it here, but there is some fogging on both the left and right sides of the plate.  I don't know if this is an emulsion problem or if the film holder leaks or if it is a matter of how it seats in the camera.  I will have to do some more experiments and figure this out.

And I will.  Today.  I need to nail this process so that I can get on with a project.

After working with the cameras all day, developing two glass plates or four negatives at a time, loading and unloading film in the dark tent, standing before the sink developing, fixing, and rinsing film, hanging it to dry and starting again. . . after that, I wanted to go out.  I wanted to have an Old Fashioned somewhere like I used to after work on a Friday night.  I mostly wanted to go out with my gal, but barring that, by myself so the girls could have a gander.  I was mad with it, really, remembering all the Friday nights Brando and I would get together for an after work drink, then go to dinner, then out for just ONE drink before an early night that always turned into many at a bar where the barmaids flirted and we would inevitably run into some other rogues or women we knew.

But there is no Brando and my best friends all live out of state now and almost everyone I know is somewhere else on vacation.  I'm not very good at making plans anyway.  I just want to make a quick call and meet someone for a drink ten minutes later.

I have none of that now.  So I made a drink and prepared my dinner of lentils, rice, and broccoli with cut chicken thighs lightly cooked in olive oil.  Oh. . . my dinner was so good. . . .  I ate alone in front of the television watching the closing arguments in the Heard/Depp Show.  Now we wait for the verdict.

There is no way the jury is going to give Depp anything.  It is too outrageous.  Imagine if they did.  Imagine the consequences of that.  Trump will start suing EVERYONE who ever says a word against him.  Everyone in Hollywood will be suing all the time.  Nope.  It can't happen.

So I smoked some pot and ate watermelon and drank some scotch, and by nine-thirty, I was in bed.

It was one of the worst night's sleep I've ever had.  Old C.S. is going to have to give up the shuffling.  My back and hips and knees won't take it.  I was in agony all night.

And so now, on Saturday morning, I should be heading out with my cameras to make strange and wonderful images.  That's what I should be doing.  But I am miserable and will probably stick close to home.  I'll make pictures, but they will not be of the wild world.  They will be of the mundane things that surround me.  That's o.k.  Maybe I can make them sing.

Let's try this and see if I can change direction.