A Bit of a Tantrum, I Guess 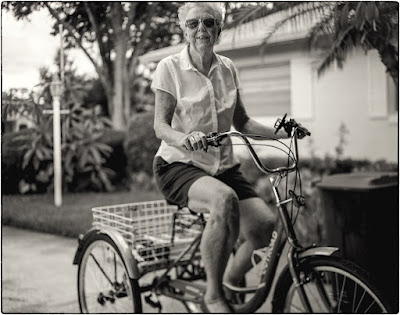 What a time to be old and retired.  Prices rise incredibly, but Social Security and pension checks stay pretty much the same.  Employers, however, are paying higher wages, but retirement investments are taking a beating.  This photo is of my mother's neighbor.  She is a grand gal, almost ninety.  She has macular degeneration and can't see very well, so she doesn't drive.  But she rides her tricycle everywhere.  And you know what she says about money?

Isn't it funny how good the pandemic lockdown was for people?  They made person to person connections even though it was at a distance.  Interpersonal relationships became more important once people were denied the great horde.  Neighbors who never knew one another were suddenly saying hello on their neighborhood strolls.  People were making money in the stock market but hadn't any way to spend it, so their savings went up.  The environment was rapidly improving.  There was a stillness and a quiet in the world.

Then everyone got out and the world went to shit.  People started spending all that money on things.  They wanted trucks and motorhomes and they weren't available.  Supply was cut, demand was up and--BOOM!--we got inflation.  Now people are worried about their 401-things.  They are losing money faster than a goose can poop.

Ha!  Just because he walks and talks and acts like Mr. Magoo, he is an incredibly easy target.  But really?  The masses want to take no responsibility for this thing?

Nope.  People want to work from home or not at all, buy trucks and get their nails done, and binge on Netflix, Apple T.V. and Amazon Prime.  They want to go to concerts and big arena and stadium sports events.  They want to belly up to the bar.

Unless they are rich and famous.  They don't want any of that.  They want a palace in which to do yoga and burn Gwyneth Paltrow candles.  No bumping elbows with the hoi-polloi.

Greed and Yearning, two sides of the coin.

Well, now.  That was spontaneous.  I have no idea where that came from.  I just wanted to show that wonderful big camera portrait of my mother's neighbor.  She's been telling the neighborhood about it.  She liked most that I had to go under a hood to do things.  I hear the other neighbors are intrigued.  The woman's daughter printed a copy of the photo and put it in a frame.  I intend on giving them a good copy once I talk to her again and see what size she wants.  As I say, she is a grand gal.

Last night, I watched some YouTube videos on Matt Black, a Pulitzer Prize winning photojournalist (link).    He is, I think, very idealistic and naive about social issues when he talks, but he is certainly earnest if not zealous.  He has a belief in what he is doing and he does it all the time.  He has a lot more years to continue doing it.

After watching a few videos and checking out his website, I was depressed.  What the fuck am I doing sitting at home watching YouTube instead of going out and making photographs?

I need to decide on a project.  I have become incredibly routinized and listless.

"You know why they are doing this."

"To investigate the attempted overthrow of the American electoral process?"

"No.  The elections are coming up.  They figure if they can trash republicans, you know?"

"Oh.  I thought they were uncovering the roots of the rebellion."

"It's a bunch of horseshit.  Did they mention that Trump had asked for 10,000 additional troops to be sent to defend the Capitol?  Did they say that Nancy Pelosi kept that from happening?"

"Really?  Where'd you get that information?"

Yup.  People have more information than the investigative committee.  That's the great thing about the masses.  They're informed.  I spoke with a political science professor from the local university yesterday.  He had lots to say about the hearings, but then he admitted he hadn't watched.  When I mentioned Bennie Thompson, he didn't know who I was talking about.  No, I'm not kidding.  I was floored.  But this fellow is very conservative and prone to weird theories.

I met with an old colleague from the factory for lunch yesterday.  We went to the Tattered Kilt.  We were there about a year ago and both became enamored with the barmaid whose kilt was a real crowd pleaser--as was she.  One would imagine that she was wearing boy shorts to confute the longings of the great unwashed, but one would not be correct.  That outfit was a real money maker.  It burned a hole in my brain, and apparently my buddy's as well.

But nothing remains.  The place was not as magical this time.  The barmaid was one of those permanently aggrieved parties, I think.  I had no envy for her boyfriend.  The music was horrible, too.  It is an Irish bar without Irish music or food or drink.  I ended up ordering a Reuben and fries.  The thing was the size of an opened dictionary.  I couldn't eat it all.

We stayed a good while.  Maybe we were hoping for a shift change.  But the place was full of Proud Boys, I think.  WTF is up with them?  They are all the size of lumberjacks, big and thick as a brick with the shoulders and wrists of a power lifter.  Somehow, all of their faces have the same expression, you know the one, the pit bull look.  I guess I feel about them the way some females feel about beautiful women.  Beauty and strength are qualities that those who feel like intellectuals try to downplay.  Surely there is a disconnect between the genes for intelligence and beauty or strength.  I mean, it seems obvious, doesn't it?  Oh, sure, there are the anomalies, but they are exceptions, not the rule, right?

We decided we would not be going there again.

It is said that the weekend here will be a rainy one.  The rainy season has begun here, but you cannot always count on it.  I may be lazy.  I may eat.  I should load up on exotic groceries just in case.  My house is comfortable.  I have become complacent and uncomfortably numb.