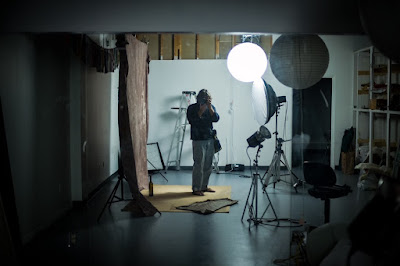 It is hot, now, and terribly humid.  It rains most afternoons but sometimes, unexpectedly, at random times during the day.  It is terrible to work outside.  I want a studio again.  This was mine when I first moved in oh so many years ago.  Just some lights and a portable backdrop.  I hadn't even built the stage yet, had not begun to collect props and costumes.  Good God do I miss it now, one half mile from my house, right in the heart of town, walking distance from almost every good bar and restaurant around.  Behind that wall was the another room that held a computer, large printer, a couch, a chair, a large coffee table, a refrigerator, and several big boxes of my large prints.  It served as a reception area with prints hung on every wall, a place where people often ooo-ed and ahhhh-ed.

But I no longer do and rents are so high, I don't think I ever will, at least not here, again.  And so, I must learn to work and sweat and suffer through the miseries.  Or give up. 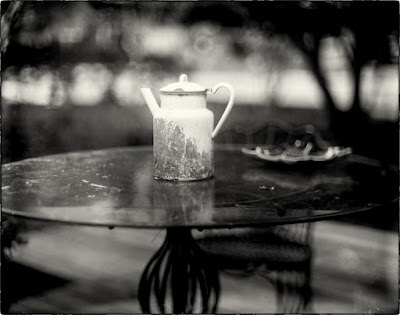 I don't know if you have ever seen this one before.  Ho!  This one, though, is different.  For one, it is perfectly focussed.  Second (for two?), it is a dry glass plate negative.  For three, it is the first picture I took using my new 100 year old shutterless lens.  I put it on my Chamonix.  The plate speed is really slow.  Know what I mean?  No?  Oh.  It isn't very sensitive to light.  It only records blue and U.V. rays.  That means it takes a whole lotta light to make a picture.  And without a shutter, that means I have to take off the lens cap for just the right amount of time.  For this, I counted "one thousand one, one thousand two, one thousand three," and put the cap back on.  It was a bit too much time.  The plate was way over exposed, but after scanning it, I was able to capture the image using digital editing tools.  Voila!  Look at that out of focus area.  That's the selling point for this particular lens, a Myers-Goerz Trioplan 210mm. 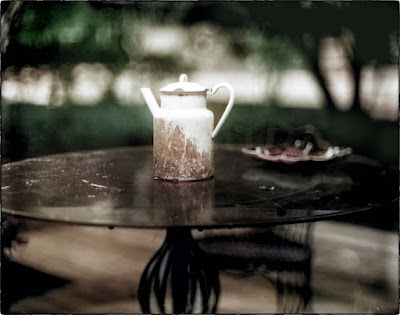 The glass plate people aren't enamored with me yet.  Well, they were at first, a little, but then, you know, I stepped into some shit.  It happens.  First goofy, I can turn witty, then something else.  It has usually worked, starting out as Slappy and then morphing into T-Bone.  But glass plate people are large format camera people which means they are more technical than other photographers through necessity.  I am a sloppy guy, a "guesstimator" if you will.  I try to get the odds in my favor, but it doesn't always work out.  But these guys are spec nerds.  They would have metered this scene with a spot meter covered by a blue filter to work out their exposures instead of making a guess.  They would measure the extension of the camera bellows and then would have done some math to come up with a compensation for the distance the light would have to travel.  I'm just not that guy.  As for colorizing the image. . . ho ho ho!

But I really like this lens and I will go out a-guesstimating again today if I get out early enough and the weather holds.

I'm already getting a late start.

I wonder if I will ever get a photograph of a person again?  Or anything more than a "test shot"?  I'm as sick of it as you are, trust me.  More so.  I disgust myself.  I stick around the house "practicing" while you are all out having fun, riding carnival rides, eating hot dogs, walking across the dunes to the beach, stopping at roadside attractions in the heartland.

I, on the other hand, will make dinner for my mother tonight.  There's half my day.

"Quick, this is horrible. . . say something clever or witty or interesting."

"Well then, you're fucked.  Nobody wants to read this."

"I know.  I didn't even enjoy writing it.  It's worse than the 'Cetology' chapter in Moby Dick."

"Keep telling yourself that if it makes you feel better."

"I already said it was not good."

"But you are still going to leave it, right?"

"O.K. then, Mr. Literati.  I'll wait 'til tonight when you take another phone pic of your cocktail.  That will be interesting."

"Well, I could show one more picture.  I took it at the same time as this one." 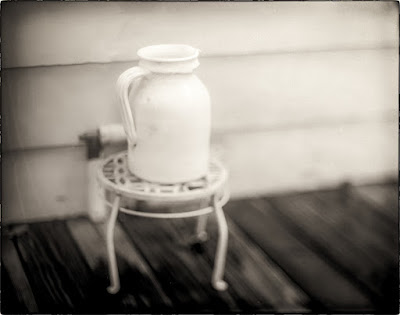 "You're being sarcastic again, aren't you?"