"Nothing.  It's just a test shot I took with my Liberator camera."

"Why are you posting it here?"

"I don't know.  It's kinda cool, I think, and it cost me a lot of money to make it.  Not a lot of money, but it is more expensive shooting 4x5 film.  And it takes a hell of a lot more time.  And all I have are cell phone snaps.  I haven't been shooting anything lately.  I want to.  Every day I want to.  But. . . you know. . . way leads to way and the next thing you know you've eaten dinner and are settling in for the evening." 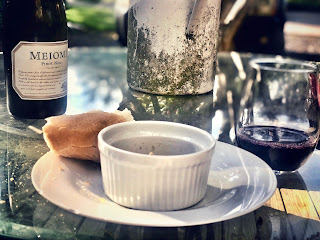 "Here.  Here is yesterday's cell phone shot.  This actually turned out to be most of my dinner.  I was getting ready to watch the January 6 Hearings, though I thought I probably wouldn't.  The shot looks nice, looks like a fine late afternoon on the deck, but it has gotten hot and steamy and the mosquitoes are swarming.  I don't tell people that, though.  Photographs are transformative.  It looks like a nice afternoon in Mill Valley."

"I did.  How can one not?  On the one had, it seems like a made-for-t.v. production.  On the other hand, it is one of the most significant historical events in most American's lives.  So yea, I watched.  Bennie Thompson's opening statement almost queered the deal for me, though.  He started out with references of racism among his constituents, antagonizing the very audience he should be hoping to sway.  Plus, he's hard to listen to.  He's one of the worst public speakers I've ever seen.  But Liz Cheney's presentation was near perfection.  Analysts called it "prosecutorial" but I just saw it as good essay writing.  Make a large claim, divide into parts, and support each of the sub-claims with evidence.  She laid out her argument so that ANYONE could follow.  It wasn't nuanced.  It was not subtle.  It was simply clear.  The problem is, I doubt that many people were watching.  I know many people who weren't."

"I wasn't home when it started.  I figured I would catch the highlights on the news. But look at your spread in that picture.  We already know which way your politics are leaning.  I was out drinking Bud and eating peanuts.  You are such a Bobo, a limousine liberal, if you will."

"I don't have a limousine."

"No, but you wouldn't mind one.  You'd ride in it to all those liberal fundraisers."

"Why are you busting my balls?"

"You don't think you deserve it?"

I may have had that conversation in parts.  I may have dreamed it.  I don't know.  But I did watch, and I was impressed, and I have been conditioned by years of listening to the "liberal press" to understand that they will amp up the crowd but that nothing will be done in the end.  We've been spinning our wheels for years and years.  Who in America, besides Gwyneth Paltrow, is happy right now?  Anger is palpable.  Murder is the miasma we breathe.  It is enough to make you long for a lockdown.  Remember that?  Remember how peaceful it was.  Remember how nature began to recover its equilibrium almost immediately?  Remember people walking and talking to one another at a distance, sure, but talking?

People hated it, I guess.  I was fairly enamored.

In other news, The Little Whores of Epstein are turning on one another.  Each accuses the other being complicit and more.  Dirty girls, they say.  Meanwhile a Norwegian professor is calling for pedophilia to be taught in schools as innate sexuality.  Oh. . . there is plenty of research to support that, but it is still a bridge too far.  I find it remarkable, though, that people will allow that some things are innate to our personalities and are happy enough to make those things illegal but about something like this there is only denial.  Can't be healthy.  But remember, I'm the one who denies a universal moral code we can find any evidence for.

"You don't think you deserve it?" 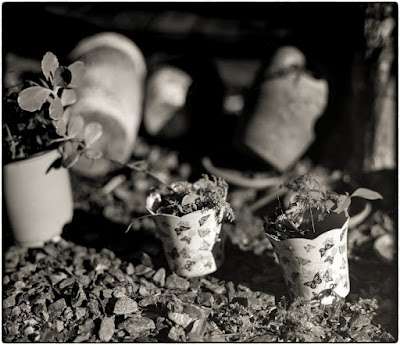