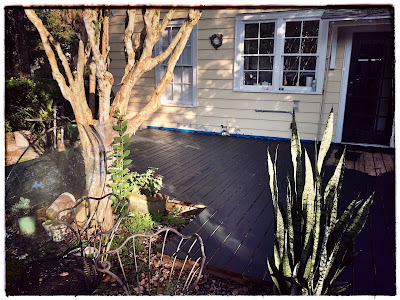 I'm one miserable hombre this morning.  My back is whacked and kept me awake during the night.  But let me begin at the beginning and work my way to where I sit now.

I was gung-ho to get to work yesterday morning.  O.K.  Not gung-ho, but I was going to do it.  I was going to skip the gym and go wash the porch at the apartment, then, later in the day, paint the deck.  A twofer, if you will.
Then this happened. 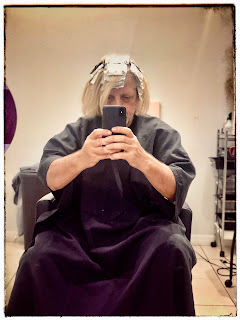 I got a text from my beautician: "Are you coming at eleven?"  Oh, shit, I said, you bet I am.  I thought about going up to start cleaning the porch, but there wasn't really time, so I decided to develop some film. I wanted to be productive, you know.
My beautician and I chatted about her new love of hypnotherapy and reiki.  She is going to spend a weekend getting certified as a reiki something or other.  She has become a spiritual counselor, or so it was inferred.  When I said I didn't believe in auras, though, we began to tussle.  So, of course, I went on to deride therapists and counselors, too, which set her off on a long narrative of her own mistreatments in life, from a terrible childhood to being victimized by egoists with narcissistic personality disorders. . . etc. She has had to have a lot of help to yada yada yada.  I'm a real redneck, I guess, because all that crying about how shitty your life was and then paying someone to listen to your story or paying someone to tell you how wonderful your auras are leaves me cold.  I didn't want her to fuck up my hair, though, so I agreed to some things and started making up stories about fictional friends like Oscar Welles who is an amateur taxidermist.  For some reason, she found THAT weird.  She told me that her chicken had pecked out the eyes of her rabbit that morning and now the rabbit is blind.
"Let Oscar have it."
When I got up out of the chair a couple hours later, I was no longer blonde.
"What's this?"
"I decided to give you a silver treatment.  It looks more natural," she said.
"Did you decide this before or after I told you that auras were bullshit?  You made me gray!"
"It will wash out," she said.
I don't believe her.  My hair now matches my beard.  Jesus.
I stopped by my mother's house on the way home since I knew I would be painting the deck later.  When I left her house, it was 97 degrees.  The sun would knock you down.
When I got home, I thought it best to take a nap.  But I didn't sleep well.  I knew what I had to do, so at 3:30, in the hottest part of the day, I got with my paint and my brushes to work.
First, however, I had to put the painter's tape up on the bottom boards of the house.  Fuck me with a silver spoon--that was the hardest thing I've done in a very long time.  My right knee has a torn and swollen meniscus, so bending my leg to get down was very painful.  Once down, however, I had to get lower to place the tape evenly across the boards.  I knew I had lost flexibility, but this was serious.  Every part of my body was straining.  I guess some of it was a lack of core strength because tilting to my left to get my head even with the deck was nearly impossible.  I was in the direct sun and had sweated through my shirt in mere moments.
Tape, scoot, tape, scoot. . . .
When that was done, I was ready to call it a day.  Rather, I got a brush and painted all the parts of the deck leading up to the house.  I did this bending from the waist, knees bent.  I could feel the strain in my back.  That done, though, the next part was easier.  With a long handled roller, I was able to stand straight while I painted.  That was going well.
Then a truck pulled into my driveway.  It was my tree guy.  He said hello and then said he had to talk to my neighbor about his trees and that he'd be right back.
"How do you guys work in this heat?" I asked when he returned.  He just shook his head.  He doesn't do the tree work.  He just owns the business.
"Listen, I'm going to Cuba next week if you want to come."  Then with a devilish grin, eyes smiling, he said, "I can hook you up.  I know some women. . . ."
"Can't go, man.  I've got too much to do right now."
"O.K.  If you need any help, call me.  I know carpenters, plumbers. . . . "
I thanked him and told him I'd see him when he returned.
I want back to rolling on the paint.  My neighbor came over.
"Is it o.k. if we park some cars in your driveway while we are having tree work done?"
"Sure, no problem."
He began giving me advice about my deck.  Bad advice all around except for one thing.
"Get a skateboard to sit on when you paint in the cracks."
Maybe a good idea.  I'll see.  I have forty-four sixteen foot gaps to paint between the deck boards today.  That is going to be excruciating.  After that, I have to put a second coat of pain on the deck.
He left and I almost finished up.  I was just shy of making a gallon cover the deck. 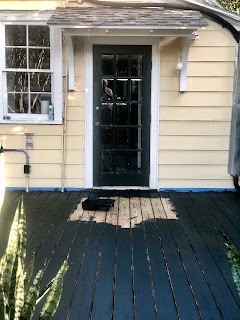 I had, as they say, painted myself into a corner. 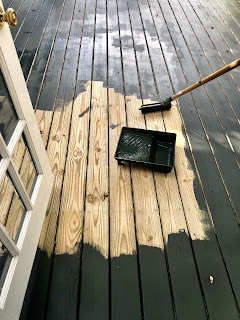 It was six-thirty when I stepped into the house.  I still had to clean the brushes.  I had been pretty careful about getting paint on me, but washing the roller in a five gallon bucket, I splashed green water all over me.  I went straight from the bucket to the shower.
And then I made a cocktail.  The cat, who doesn't come around much any more, was surely here walking across the newly painted deck.  She found a usual spot and lay down.  I got her food and put her bowl down and fed her, then went into the yard to sit in one of my deck chairs.  But it wasn't fun.  It was still hot and I was beginning to sweat.  I needed to go to the grocery store to get something to prepare for dinner.  I hadn't really eaten all day and I was getting shaky and anxious.
It was eight when I finally sat down to eat.  I don't like eating a big meal this late.  Selavy.
I tried watching the 1/6 commission hearing on YouTube, but Judge Luttig was too painful.  I couldn't.  I was tired.  It was early, but I went to bed.
Waking up with bad pain in the dark of night always leads me to even darker thoughts.  No matter which way I turned, my back was screaming, so in that black sleeplessness I lay and thought about all the horrors to come.  Most of them, anyway.
Up before dawn, standing was as bad as lying down.  My entire body hurt.
"I'm getting too old for this shit," I thought.  Then I thought about what I will have to do today.
A week or so ago I sent a message to Ili saying that a fellow wanted her number and asked if I should give it to him.  Maybe I've already told you this.  It was no longer her number.  I thought it was really weird, and I brought it up to my beautician.
"She's done with you.  She's moved on.  You can't go texting her every time you see something that makes you think of her."
Jesus.
"I don't.  I have never texted her but in response since she left."
"You were trying to get her to respond to you."
Man, I thought, is this the way you are going to be a Life Coach?  I guessed I had really pissed her off.
So this morning, silver haired and walking like a crab, I must get on with things.  It would have been nice to cuddle up to my own true love last night when the horror show began, but I think, "No. . . you wouldn't want to put somebody through this decline.  That would be horrible."
Stil. . . .
Posted by cafe selavy at 8:01 AM