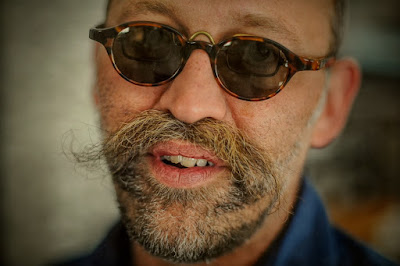 For the past month or so, I've been kind to myself in the gym, just "exercising" more than "working out."  It was nice.  It was fun.  And I was beginning to look like everyone else.  You know, a potato with swizzle sticks legs, toothpicks arms.  So this week, I stepped up my routine. . . and I'm paying for it.  It wears me out and leaves me sore.

That is how I felt yesterday at the end of my workout, but I had promised myself that I would tackle the jobs I have to do around the house--painting the deck and washing the outdoor screened porch on the apartment.  Then I will paint that, too.

So I went to the paint store, Benjamin Moore.

"You need to wash your deck before you paint it," said the fellow who works there.

"Oh, I used that chemical wash about a month ago.  I'm just going to sweep it off and then paint it.

"No. . . you have to wash it again.  There is a lot of dust and grime on it now and it will stick to the paint and cause it to peel.  Just pressure wash it and let it dry for 24 hours before you pain."

But first, I headed to my buddy's camera shop.  I needed some film and wanted to get a red filter form the lenses on my Chamonix.  I went into the front house where the repair people are.  Oh. . . joy. . . the pretty camera repair girl was there.  I told the guy who fixed my lenses to lens boards what I wanted, and another repair guy who I've known from camera shops for years came over to show me a new photo book he had just gotten.  We were all chatting and cavorting when the owner came in from the retail shop behind the front house and everyone got back to work.  The repair guy and the owner and I went back to the retail shop to look for filters, of which there were none in the size I needed.  The repair guy wanted to see some of the photos I'd taken with the barrel lens he mounted, so I went to the car and got my phone and came back and showed him a couple.

The point being, it was mid-afternoon when I got back to the house.  The high yesterday was ninety-nine degrees.  I decided to clean the deck.  It was impulsive.  It was too hot to go out with big cameras, and I had not asked the pretty camera girl if I could photograph her, and the deck thing was hanging over me and making me jittery and depressed.  So I got a bucket and filled it with water and the TSP powder.  I got the scrubber brush on a stick, moved the furniture off the deck, and began to work.  It wouldn't take that long, I reasoned, and it would be done.

"I won't be over today," I said.  "I started scrubbing the deck because the fellow at the paint store insisted I had to wash it before I paint it.  I figured it would take me an hour.  It is going to take a lot longer."

"It's awfully hot to be doing that right now."

"Make sure you drink plenty of water," she said.

I must have been thirsty.  The beer was gone.  I grabbed a second one for backup and got back to work.  Forty-four sixteen foot boards had to be scrubbed and rinsed very well, one foot at a time.  The beer turned out to be a bad idea.  I was getting really slow and lazy.  The heat was killing me.  But I cowboyed up and powered through.  It was six-thirty when I finished.  I was wiped.  The hard workout in the morning and then this.  I felt like spaghetti.  But what the hell. . . I wanted a drink.  What I needed was water, of course.  I made a decision.  Without washing up, sticky and sweaty and grungy, I drove to the liquor store. 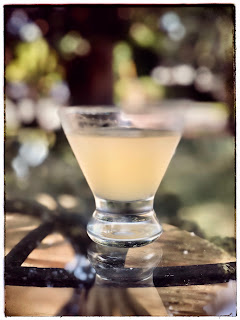 I hadn't made one of these for a long while.  And then it was gone.  I looked at my phone.  It was still in the nineties.  I wasn't about to cook.  I decided to heat up the leftover veggies and rice from the night before.  I opened a bottle of wine.

I'm skipping the gym today.  It is going to be a work day.  When I finish this bit of writing, I am going up to wash the porch.  That will take as long or longer than the deck, I think, because the ceiling is made up of many crisscrossed support beams.  I'll need to wash it with TSP and again with plain water.  Then, 24 hours after washing the deck--meaning in the heat of the afternoon--I will paint the deck.  I will do it once and then the next day do it again.  And then I will paint the upstair porch.

And then I will be done? 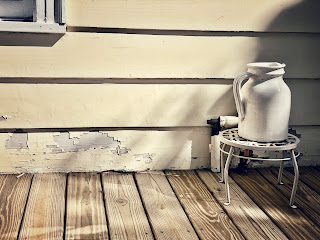 I have some touch up painting to do on the house.  And I need to put a second coat of paint on the stairs which means I'll need to scrub them, too.  I have no love of this kind of work, but I have a wooden house and a fixed income and this is just general labor work for the most part.  There is nothing technical about any of it.  I'd feel uber guilty hiring someone to do this being that I don't work and I've spent too much money this year already.  No, I will do it.  And then, as they might say in the Best of Bad Hemingway Contest, "There had been that to do, and it was done."

I also do it as penance for not making the photographs I know I should be making.

While I was at the camera store, the owner was showing a Noblex camera--a strange device that has a rotating lens that scans the scene from right to left to make a wide, panoramic image--to one of the kids I knew at the other camera store, the kids who were so friendly a while back.  The owner quizzed me--

"What do you think the exposure is on the patio right now?"

Years ago, I bought a lens for a medium format camera and bought an adapter so I could shoot it on my Nikon digital.  Strange combo, but I took some wonderful pictures with it.  That one at the top is one.  I took it in his shop so long ago.

I should never have stopped using that lens.