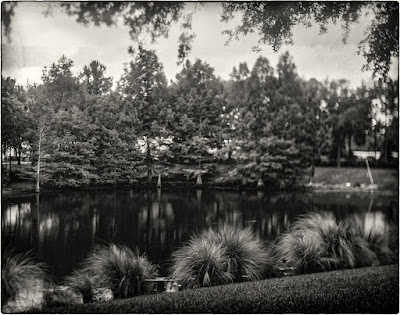 You have to be really "special"to want to use large format cameras.  Seriously "special."  I'm trying, but I am hardly the "type."  It is difficult for me because I am all loosey goosey with things.  I don't have an OCD bone in my body.  You need to be a "Felix Unger."  I'm an "Oscar Madison."  Doing this reminds me of getting my B.S. in zoology.  I was never precise enough in labs whether it was chemistry, physics, or anatomy and physiology.  It was good training for me, though.  It taught me an internal discipline that I needed.  That is what working with the large format camera is like.

Yesterday morning, I decided to get out of the yard with my cameras.  No more coffee pots and milk jugs. I'd go out and let people see me being an idiot.  There is a lot to overcome doing this in public.  Mostly, I will have to get over the embarrassment.  Making pictures with a large format camera has to be right up there with birding for The Nerdiest Hobby Award.  I feel like I need one of those Jane Hathaway outfits.  Oh, yes. . . she, like Felix, would have been great at this. 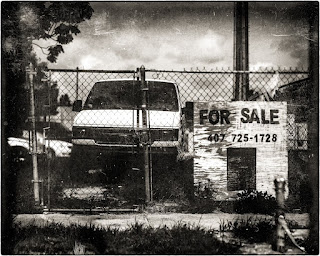 Later in the day when I developed the two plates I shot, they were very underexposed and the photo emulsion was ripped and scarred all to hell.  I don't need a big camera to make pictures as fucked up as this one. 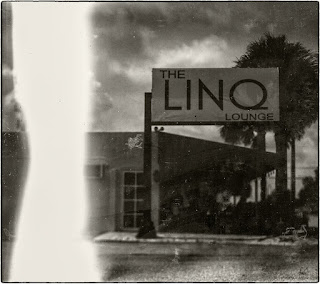 Or this.  It took a lot of effort to do this, too.  Whatever.  Lessons learned.  What were the lessons?  I'm not sure yet.  Still working on it.

The image at the top was the best of the four glass plates I shot.  I did this with the new shutterless lens.  I had to guess at the exposure.  I set the shot up, pull the dark slide, take the lens cap off and count, then put it back on.  Crazy, right?  They have cheap cameras that will do all that for you.

I shot four glass plates and ten negatives.  When I got into the car, it was after two o'clock, so I packed up and headed to the grocery store to get the fixin's for the evening meal with mother--Cole slaw, yellow rice, and shrimp.

When I got home, it was 12:30.  WTF?  I have a problem with the car battery.  One of the clamps is loose and it loses contact so the car won't start.  I have to open the hood and jiggle it back into contact, then reset my clock and radio.  But I hadn't reset the clock the last time.

Well, then. . . plenty of time to develop what I had shot.  I can develop two glass plates or four negatives at a time.  Each time, I have to walk out to the garage and move the plates or negatives into the developing tank and walk back to the house where I've been keeping the chemicals.  Rinse, develop, rinse, fix, wash--all to the timer.  Repeat.  Repeat.  Repeat.

When I finished the last negatives, it was after four.  I just had time to clean up the kitchen and shower.  Mother arrived, as she is wont to do, right on time.

Mother loves shrimp, and everything was good along with a Vouvray,  my summer wine, and a very rich chocolate ice cream for desert.

When my mother had gone, I had to get to the liquor store before they closed, but I decided to clean up the kitchen first.  Surely they'd be open until eight.

They, too, were closed.  I had parked next to a black Lexus, the only other car in the lot, and when I started to get back in the car, a woman rolled down the passenger window and asked, "Are they closed?"

She was probably in her forties and had once been pretty, but now she looked like a once upon a time party girl.  She had that drinker's voice.  Not one who is drunk, the permanent one.

"There is a liquor store across the street.  I'm going to try it."

There was no metal gate on this one, and I was hopeful.  Foolishly.  It, too, was closed.  When I got back to my car, my new girlfriend was just stepping out.  I shook my head.

"There is a restaurant a few miles down the highway that sells liquor.  It will be open."

I guessed she might hope she would find an open liquor store before she got on the Turnpike.  I'm sure she was Google mapping "liquor stores near me."

I backed out of the parking lot and headed toward the restaurant.  It is a cute little cucina that sells specialty foods and baskets with small dinner tables set up in between.  The walls are lined with liquor and wine bottles.  Upstairs is a formal dining room where I had my wedding reception.  I hadn't been here since Covid began.  Ili used to like to come here sometimes on our way home from the factory.  It was always fun. But. . . wtf?  They had no scotch.  They had whiskeys of all kind but no scotch.

"May I help you find something?"

"I don't think we have it any longer.  The prices got so high, the manager decided not to order it any more."

"He's a moron," I said.  I kept looking across the bottles uselessly.  What would I do?  Keep searching for liquor stores like a REAL alcoholic.  Sure as shitting that driving many miles to four different liquor stores in search of scotch wasn't a good sign.  Fuck.  I picked up a bottle of Johnny Walker Black.  I know, I know, but it isn't single malt.

"I'm still not seeing a story here.  What about the woman?  That wasn't a story.  Something should've happened.  'I was out of whiskey and went to the store and got some' isn't a story."

I decided to scan the four glass plates before bed.  And of course, I was terribly disappointed.  But I am undeterred.  I will keep shooting LF until I am good at it.  I will shoot some more today.  And someday soon, there may be portraits.  Oh, lord. . . my soul for a portrait.

For those of you who did not grow up watching American television in the 1960s and '70s, Felix and Oscar are characters in "The Odd Couple."  It was a movie and a broadway show, too.  Jane Hathaway is a character from "The Beverly Hillbillies."

And speaking of which, I was thinking just yesterday that Archie and Edith from "All in the Family" would have made a perfect Willy and Linda Loman in "Death of a Salesman."  Both actors had serious drama chops.  Why did nobody ever cast them that way?