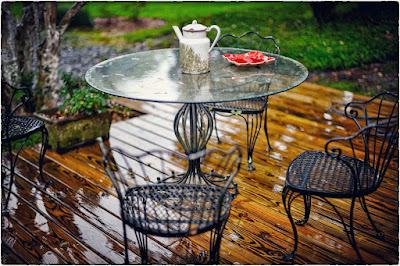 I wanted to be productive yesterday, to continue the "trend."  After the gym and a talk with "my boys," I showered, ate, and headed out.  First some bank business, then a stop at the local hardware store which is always a treat (no joke--if they don't have what you want, no matter what it is, nobody has it), then off to the camera store and to my buddy's exotic furniture shop and bar (again--no joke).

It was hotter than blazes out--95 degrees, both hot and humid.  The sun could knock you down.  When I got to the camera shop, I decided to park in the lot next door.  I went in to pick up my dandy new antique barrel lens that they had mounted on a lens board that had to be bored out to the correct size.  The fellow had done a fine job, and he showed the lens around to the other camera repair folks who work there.  I'm familiar with all of them except for a young woman who was recently hired.  I would like to be familiar with her.  She is, in my parlance, a true beauty.  Not like the Russian hookers, though.  Bohemian style.  Low fashion funk.  I try not to look at her, but she glanced up from her work once a few trips ago, right into my eyes.  My knees gave way.  She's dusky--dark hair, olive skin.  I want to photograph her, but I assume that everyone who comes into a CAMERA STORE wants the same thing.  I want that and something else, too.  Probably not what you are thinking, though.

So I lingered a bit.  And then everybody jumped.

A furious storm had broken.  The rain came down as in Thailand or Viet Nam.  It was a real tropical squall.  My first impulse was to stay in the store, but when everyone returned to work, I felt foolish.  The pretty girl was back at work, too.  The shop is in an old wooden house, however, that has a nice, deep front porch, so I decided to wait there until the rain had passed.  It didn't for a very long time and I became a little self conscious as the pretty girl's workbench was right in front of the bench I had ensconced myself on the porch.  Any time she looked up, she would see the back of my head, my shoulders, maybe even my fat gut.

The rain went on and on, the pretty girl working, me feeling the idiot.

Twenty minutes later, the rain had let up enough for me to shuffle to the car through ankle deep water in the uneven parking lot.  I was just glad the car started.

I had gone to look at cabinets the day before at the my buddy's store, but when I walked in yesterday, everything had changed.

"We just got a container in today," said the fellow working there.  I was back to square one.  I looked through the store again with my measurements.  I found two cabinets that would fit, each somewhere around $700.  These are beat to shit old Thai cabinets, broken, paint chipped.  They are beautiful.  But I wasn't ready to pull the trigger.  I had checked my bank account for the first time in months.  I made a comparison with my balance at the beginning of the year.  Things had gone south.  Way south.  In a flash I had become economy minded.  I thought through my options.  Cutting my cable is foremost.  They are the biggest thieves in America.  I could save thousands of dollars a year.

I decided to "think" about the purchase.

When I got home, it was still raining.  I called my mother.

I thought to make some tea and read.  Instead, I poured a Campari and looked up things on the internet.  Then, on an impulse, unable to sit outside with a cocktail, vexed that I could not irritate my friends with phone pics of my "grand" life, I picked up my Leica.  Now, I haven't shot with anything other than my phone and with the 4x5 camera since it arrived a few weeks ago.  I made the commitment.  But I had my new TT Artisans 50mm f0.95 lens on my M10.  I thought to use it.  I took the photo at the top of the page.

Now, here comes the. . . I don't know. . . not the "point," but something akin to it.  After I took the photo, I uploaded it to my iPhone Leica app.  From there, I transferred it through "Air Drop" to my laptop.  I opened the picture in Photoshop and tweaked it.  I made a jpeg and then sent it back to my phone.  There I edited the picture in the phone apps I use.  Then I sent it back to the computer and opened both it and the first version in Photoshop.  There I blended the two.  That is what you see.  The photo is much better than the one that came out of the Leica, better than the iPhone version.  But it is a small jpeg, this being the result of using one of the most expensive digital cameras in the world.  How fucked up is that?  Or marvelous.  I don't know.  But I'm not sure you need a camera at all any more.  It is now the apps that make the picture, really.  After you've run the image through three of four of them (which I do), nobody will ever know what camera you used.

That doesn't mean, however, that I don't love my Leica.  I do.  All of them.  But you know, its only the difference between a Timex and a Rolex.  You don't need a Rolex to tell time, but if you are a real sleezebag, you just like to.

It's sort of like Goop.  God what a scam, right?  Not to everyone.  Paltrow's selling big.  I watched the first episode of her Netflix series last night.  It is so horrific, I couldn't turn away.  The people running the company are unbelievable.  They are all "damaged" in some way.  Watching them is like watching an old carnival freak show perform at a fabulous Malibu glass house in full daylight.

They all need Goop.

Gwyneth has really set herself up as a cult leader.  It is something.

I read an article on Werner Herzog today.  He has written a novel about Hiroo Onoda, the Japanese soldier who walked out of the jungle thirty years after WWII having never believed the war had ended.  In the article Herzog is quoted: