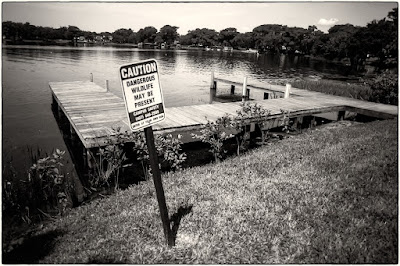 The days all run into each other and become one.  I guess I'm living on Hopi Time.  Maybe that's just how they felt, too.

I had a big day yesterday.  I think it was yesterday.  I experienced a little mania which was nice.  I went more places in one day than I had been to in two weeks worth of days.  I think.  They all seemed to have happened at once.  I had so many things to do, I was busy well into the night.  Before bed, I watched a new Bill Burr thing on Netflix.  He hosted something.  I think it was supposed to be comedy, but it was a progressive slam fest.  I mean, they each struck out at everything progressive.  It didn't come off right.  They seemed like a group of old angry people who don't really get it.  It was bound to happen.  How many times can you tell the same joke?

To wit: progressives took a beating in California yesterday.

But I got a new coffee maker.  I don't think it is the one I wanted.  Maybe.  It sure makes a hot cup of coffee.  But when I looked up "Best Coffee Makers 2022" my old one was top of every list.  Maybe mine is just broken.  I like having the coffee hot, but Jesus. . . the other one is better?  Maybe?

I got more containers, too, and a wire fruit bowl.  Like I said, I was a little manic.  I chatted up the retail lady for a long time.  She was from Cuba, so I wanted to tell her all about her country since I've been there. . .you know.

My reputation as "the baby raper" at the YMCA has grown.  Somehow.  Those Y fellows are like a bunch of Chatty Kathies.  Remember that doll?  Jesus, #HerToo.  But these boys like to gossip.  I went for years and years without talking to anybody there, but now I have a few guys who like to yap.  They want to take me out to some bars.  Or so they say.  It's the last thing I am interested in doing.  These guys are in their early forties.  They have kids who are in their twenties and they don't understand the lingo.  So I found out yesterday.  Gender fluid, non-binary. . . that sort of thing.  These guys have developer money.  You understand?  They are certain of themselves, so I just have to bump their gyroscopes, tip the tabletop a bit.

There is a new restaurant/bar on the Boulevard.  It is as it used to be around here, a rich man's club.  Very, very expensive, and they have doormen who decide if you are suitable.  So I heard yesterday.  I probably wouldn't be allowed in.  But hookers are according to reports.  Russian women dressed to the nines sit  with their Louis Vuitton or Chanel bags propped up on the bar in front of them.  Real beauties, they say.  If their purse is open, they are available.  It's an insiders game.  I mean, you have to be in the know.  They are very expensive hookers I hear.  I'm guessing they are taking developer money.  Flip-flops not allowed.

I'm sure my across the street neighbor is a client.  He's got medical money, is divorced, and acts like a player.

Me?  Oh, you know, I came home from my trip to BB&B, the camera repair shop, a buddy's imported furniture store, my mother's, and the grocery store and made dinner for one.  That's the way I roll. 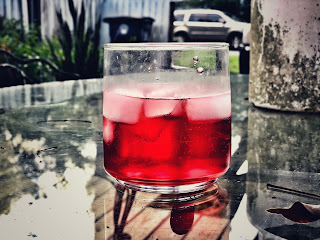 I did find a bottle of Campari at the Walgreens Liquor Store.  It was the last one.  WTF is with that anyway? 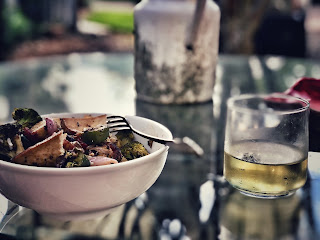 Then I grilled veggies.  Cauliflower, broccoli, red potato, mushrooms, red onion, jalapeño peppers, cherry tomatoes, and tofu with olive oil, Kosher salt, rough ground black pepper, and cayenne over jasmine rice and topped with balsamic vinegar.  It was so good I weeped.  I thought the picture turned out nice, too.  Maybe I should have put that at the top.

I didn't hear back from Ili.  But then again, I wasn't grilling vegetables for dinner back then.  I am a radically different cook now.

The boys at the gym can't figure me out, so they make me up.

The third cup of coffee is still hot.  That's a plus.  But I'm conflicted.