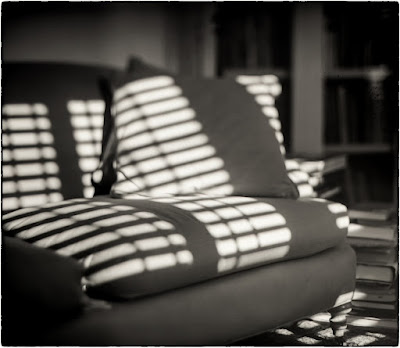 There is a chance that by now you have heard the verdict, or rather, the incident that is likely to cause the next civil war.  Yep.  Johnny Depp won three out of four falls against his opponent, Amber Heard.  Loser leave town, Texas chainsaw match.  Here is what I wrote to friends while the verdict was being read.

The verdict was bound to be weird.  It WAS.  The jury found them both guilty of defamation. But Depp got the majority decision in $$$.  Amber Heard’s statement after the trial is that this is a step back for all abused women.  That will play well in many quarters.  I don’t think Heard is representative of all women, though.  I sure wouldn’t want her representing me.  Depp, on the other hand, was dick enough not to show up for the verdict, off partying with his drug buddies.  They are two losers.  The verdict should have been that they have to stay married.  Ha!

I should not have watched so much of this trial.  I realized last night I have PTSD.  Bad memories all around.  I think it is clear that men can suffer from domestic violence, too.  The difference is that men, in the main, need not be as afraid of the physical stuff.  In that department, the game is fixed.  And that can be terribly frustrating I'm finding as I age out a cripple.

And that is what tips the scales of justice, I think.

There should be no victory laps, no cheering of the verdict.  Depp and Heard are not emblematic, they are merely symptoms.  Oh, don't get me wrong.  I found the whole thing entertaining, probably because it distracted me from the real horrors taking place around the globe.  It was a mini-misery that had no real effect on me in the end.

Though I am truly surprised at the verdict.  God knows I hope I am never judged by "a jury of my peers."  I had to look that one up, for I know it would be impossible to find a jury of people like me.  The phrase is taken from the Magna Carta when nobles were to be tried by other nobles and not the king.  For us, it simply means "fellow citizens."  Jesus.  No, I don't wish to plead a case before a random group of "fellow citizens."  I know that crowd.  I wouldn't stand a chance.

But the heck with all that.  I've got to figure out what people want to see.  In pictures, I mean.  And don't.  What do they like?

I took the photo above a couple days ago with the big old Liberator as the light spilled through the shutters into the living room.  I don't know.  Light.  It is what Hopper said he wanted to paint.  Light falling on a barn or something like that. 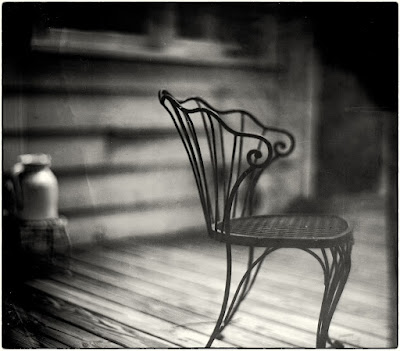 Here's another simple thing.  The negative was fairly ruined as it crumpled in the holder.  I'm surprised that I could pull an image from it at all, but it has its own appeal.  I like shapes and textures and lines.  And of course I should just make pictures of things that appeal to me and not try to pander to the tastes of others.

Still, everyone wants to be adored.

That's why there are many photos that appeal to me that I no longer show.  Times change they say.  Or so said Norm Macdonald in the special he recorded in his home studio before he died.  I watched it on Netflix last night.  It is not his best stuff, but given that he was knocking on heaven's door, as that Nobel vernacular poet once said. . . .   If you watch it, skip the discussion that follows.  Trust me.  Just turn it off after Norm.

Now that I am using the BIG cameras, I have no impulse to use the oh-so expensive smaller ones that I have.  Especially the digital.  There is only one camera other than the BIG ones that appeals to me now, and that is my iPhone. 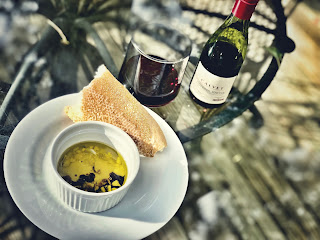 Seriously.  It's a pip.  It makes the best snapshot photos of all.  And I'm addicted.  This is last night's pre-dinner snack, olive oil, balsamic, and garlic with a hunk of French bread and the wine that C.C. brought back from Paris.  Both the repast and the photo thrilled me.  I had to send it around.  Maybe I DON"T know what people want and don't want to see, but I know what appeals to me.

While I was enjoying the late afternoon with bread and wine, the little feral cat came around, so of course I jumped right up to feed her.  I'm a fool like that.  And as she was eating. . . holy smokes!  The neighbor's cat showed up on top of the fence. 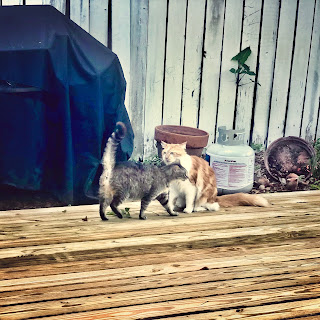 Christ, he's out of jail!  The little feral cat was so happy, and apparently so was he.  He licked her and licked her so sweetly.  Suddenly, it seemed, life was fuller.  But the neighbor's cat hasn't been outside for weeks, and he looked as if he'd aged a lot.  He has always been something of a tiger, but he looked scared about jumping down off the fence.  He would start and stop and look and then, finally, he put his paws on the slats and tried to slide down.  He rather crumpled when he landed.  He's going to have a lot of fighting to do now, though, for the other cats have been claiming his territory.  He looks to have lost some of the old athleticism he possessed.  I feel for him.  We shall see.  But my little feral kitty has relaxed a bit now that he is around as if to say, "Alright.  I'm O.K.  My bad boy's back and you fuckers better look out."

I took a single photo yesterday, but the film went on the wrong side of the dark slide when I pushed it in, so I actually made none.  I will try to make four this morning.  That is how many negatives I can process at one time.  It is not a bad number.  I could be happy with four a day, I think.

That and, of course, my daily iPhone picture.  It is what all the girls use when they take pictures of themselves naked in the bathroom.  If you Google "Amber Heard Nude," you will see.