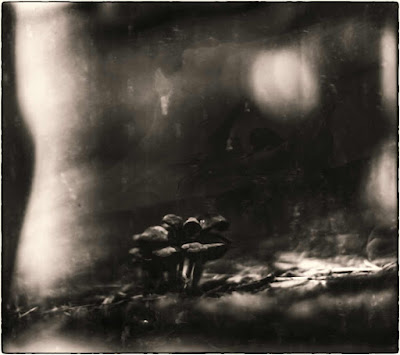 I should just quit.  Give up. I'm sick with failure.  How many times does one need to do something badly?  Perhaps I've gotten too old.  Maybe I just don't function well.  Why do I keep making mistakes?

Actually, this picture isn't so much a mistake on my part as a failure of materials.  That is what I think.  It is a glass plate I shot yesterday of mushrooms growing in my driveway.  When I developed it, there was hardly any image on the plate.  The scanner, however, was able to see things I couldn't.  What is saw, however, was deeply flawed.  With just a little more exposure, this could have turned out wonderfully.  As it is here and now, it is a nightmarish vision that does have its own appeal.  It is, however, not what I set out to do.

While I was on my hands and knees trying to situate and focus the Liberator, I heard the yardmen across the street talking.

"Is that an old camera?"

Without looking up from the viewfinder, I said, "Yea, it's an old camera."

I clicked the shutter and pushed myself painfully up from the mulch.

I explained what a special camera it was.

"That's cool," the younger one said.

"Do you want your picture taken?"

"Yea, sure," they said enthusiastically.

"Just don't put me on any social media," one of them said.  "What are you going to do with it?"

And I got the usual male response.  "Hell yea, put me on!"

"What's that, said the older one."

I was laughing.  The younger one explained to him that Grindr was a gay site.

Hell yea!  I'd done it.  Hell yea!  Kicking off the series.  These were my first workers, and it had been easy.

They didn't want me to text them the picture, so I said I'd show it to them next week when they came again.

I'd know that afternoon when I developed them.

The day was slipping by.  I had putzed around uncertainly all morning.  I just couldn't get a direction. It was going on noon when I finally got out the door for a walk.  It was hot, but not as bad as it could get, so I ran the hills along the way, little short old man shuffles, really.  I still had illusions that I would turn back time, I guess, but I'd really need to be spinning the dials at this point.

When I got back to the house, I was dripping sweat.  It would take me some time to quit sweating.  I sat down and checked my computer.  Still hot, I thought about eating.  I didn't really have anything, though, so I decided to drink an old man drink.  No, not liquor--Ensure.  I had some in the cabinet from when I was too sick to eat.  Jesus, I thought, my life is pathetic.

After a shower and a short nap, the old clock on the wall said it was getting beyond mid-afternoon.  I hadn't developed the film yet.  Why?  Fear, I thought.  Quickly, I mixed up fresh chemicals and began.  Develop, rinse, fix, rinse.  Now came the moment of truth.  I opened the developing tank and pulled out the holder of two of the four negatives.  Fuck me, fuck me, holy shit!  They were blank.  Transparent.  There wasn't a trace of development on them.  My mind raced.  What could have gone wrong?  I went through the process in my head.  Yea, I had removed the dark slides.  I had done everything.  This was just some divine interference, I thought.  I'm just getting screwed over and over again.  But why?  Why?  What did I do?

Of course, I knew I was guilty of just about everything.  Still, the punishment seemed too cruel.

I hung everything to dry and drove to my mother's.  It was hot with that heat before the storm, but we sat out in the garage and had a beer and a cheroot.  No, we did not have a cheroot.  I did.  We shot the breeze as we always do talking over our world, the neighbors, relatives, ailments, the gardens, how we slept the night before, what we would eat.  The usual.

I saw lightening and heard the roar of thunder.  I told my mother I had to get to the store before the storm came.  I bought materials for my supplemented Greek salad and beat the storm home.  At the counter, though, chopping the vegetables, I realized I hadn't gotten the Feta cheese.  Goddamn me, truly. . . my mind was going.  Too many mistakes.  Why had two of the four negatives been blank, I wondered?  How could that have happened?

I chewed on that and on the Greek salad as I watched the news.  Bannon played victim.  New bombshells coming Thursday from the 1/6 Committee.  A global heat wave was wreaking havoc on human health.

I switched over to YouTube.  I poured a whiskey.  I may have to quit drinking, I thought.  I can't get the whiskey I always drink, at least haven't been able to for weeks.  I did get one half gallon bottle for an outrageous price.  Now, all the scotch prices have increased.  Suntori whiskey, the Bill Murray brand in "Lost in Translation," is on the shelves and is under $30.  Maybe.

All this while, the dry negatives were hanging in the bathroom.  Why hadn't I scanned them yet?  What was the deal?

I lay my head back on the couch and fell asleep.  My head kept slipping uncomfortably to one side, but I couldn't wake up.  Why was I falling asleep?  This was something new.

"You don't want to scan the negatives," a little voice said.  "You're scared."

In truth, I was.  I didn't want to find that I had botched focus again.  I wanted this picture to be perfect.  I needed it to be.  I shook my head and struggled to my feet.  I went into the bathroom and grabbed the two negatives still wondering why the other two were blank.

I dusted the negatives and put them in the holder, settled them into the scanner, and pushed "Preview."  As the scanner warmed up, I put on some music.  And then. . . . 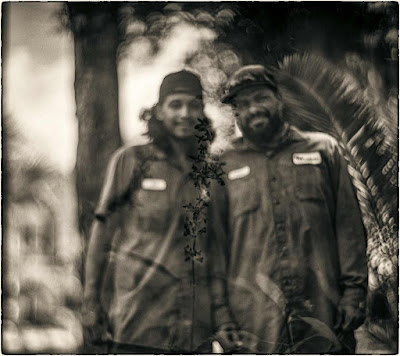 Holy fuck!  How had I done this?  Oh, shit, no. . . the mystery was explained.  Of course I'd fucked it up.  I'd shot the same piece of film twice.  In the foreground is the picture I had taken of a flower in the garden.  There, vaguely veiled by the first exposure were my boys.  I collapsed in the chair.  I was done.  I had to give this up.  I was too sloppy, too disorganized.  There were only two film holders out.  How could I possibly have done this?  How?  How?

I didn't want to think about it any more.  I turned out the light and went to the t.v room.  I was done.  I was through.

But I'm not.  When I finish writing this, I'm going to go back to the garden and the driveway and try again.  Those could be nice pictures, and I don't need to ask if it is o.k.  The boys, though. . . maybe when they come back next week.  Jose, the one on your right, came back a few minutes later apologizing, saying he would never do this, but his back was hurting bad and he just wondered if I had a couple aspirin I could give him.  Of course, I said.  He was a swell guy.  I'll explain next week.  Maybe they will let me make a picture once again.