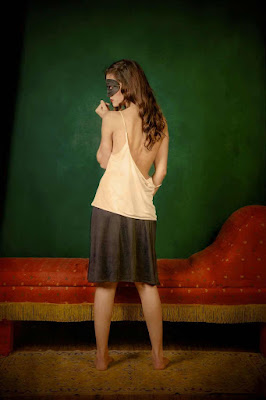 Let's quit looking at black and white photos of the people-less industrial wasteland for a moment.  Well, we did have people a few days ago, but I am out of those completely, and they WERE in black and white. Still. . . should I even show this image of female seductiveness?  No. . . a seductive picture of a female.  That puts the onus of responsibility on the photographer, not the model.  That, even though it was a team effort.  We were partners, so to speak, in the image.  Neither of us could make it without the other.  There was no coercion other than that master narrative that oppresses women everywhere.  The one we are so desperately trying to overturn.  The one that keeps getting republicans elected to positions of power.  Isn't it?  Or is it the ideology opposed to what "progressives" perceive as a "master narrative"?

I don't know.  I can go either way.  I'll fall on the side opposite the one in whose company I happen to be in at the time.  But we have to have SOMETHING to talk about.

"Tell me what you think."

What was the modernist's answer?

"I think we are all in. . . . "  Something derogatory and wastelandish.  Was it Eliot?  It was either his or Beckett's.  It will come to me.  I succumbed to the modernist narrative long ago.  Hell's kitchen?  No, that's not right.

I love it when people tell me what they think.  They believe they are informing you about "the world," but they are really telling you about themselves.  You get a glimpse into their barely cohesive world view. . . if it is cohesive at all.  People are self-contradictory most of the time, albeit well disguised. All my training is to look for the gaps and chasms in their logic and their ongoing narratives.  It is not "them."  It is "us."  All of us.  It is impossible for us to hold a consistent viewpoint in a lifetime of experience.

Everything falls apart in moments of sexual pleasure.  Sex isn't rational, at least the way we practice it.  We try defeating nature's intended purpose for sexual pleasure almost all the time.  I mean, we are not trying to procreate.  One doesn't see little fetuses or babies at the moment of orgasm.  One sees blinding light and the flight of doves. . . or whatever.  But nobody screams "Babies!!!" right then.  We are mostly a species of sexual deviants when you think about it.  Some may reproach it, some may fight for the right of it, but at that moment of celestial pleasure, we are all pretty much united in irrational thinking.

If you were a careful reader of that last paragraph, you would have been startled by the mention of "nature's intended purpose."  That is the assumption worthy of argument, and I, for one, certainly don't believe nature has an intended purpose.

It seems impossible to perform the theory, whatever theory it is.

The fellow at the gym who likes to engage me with "intellectual" questions yesterday queried, "What do you think makes a novel a novel?"  Something like that.  Really?  In the middle of my workout?  So I simplified.  "All traditional stories come down to this.  Somebody wants something over there, but when they try to approach it, something or someone is in their way.  So the story is about how that person does or doesn't overcome the hurdle and the flesh of the narrative is how it happens.  Postmodern novels by and large try to eschew this form."

Nope.  He had follow ups.  The reason?  Oh. . . he had just completed a novel and was having a writer read it to give him notes.  He had given the reader the first half.  I told him that if I were the reader, I would want to read the first chapter and the last so that I might have an idea or some expectation about what would come between.  I said that the reader might give him notes on character development or plot twists or descriptions of the setting, all those thing you get from one of those books about creative writing, but nobody--no one--could give you much help with your literary style.  And for me, I said, that is the difference.  Plot doesn't really matter.  The fundamental plot is being aware that you are human.  Being human and knowing you are temporary and that you have a stamped on date is conflict enough.  That one is faced with decisions is far more than enough.  And that, in modernist terms, style is our defense against the void.  Not just literary, but in life.  As Bukowski said, what matters most is how you walk through the fire.

Bukowski may have said "how well you walk through the fire."  I can't remember.  I could Google it quick enough, but I don't care.  I don't want that word in there.  "Well" would be the assumption worthy of attack.  I'd prefer not to have it.

My friend brought dinner last night.  I had spent the afternoon turning my studio back into a living room, my film processing lab back into a kitchen.  And other stuff, too.  People live in messy houses.  You become blind to the mess, but having company come over, the threat of that, helps on regain one's vision.  Meaning. . . I had a lot of "straightening up" to do.  Fresh towels in the bathroom.  A new bar of soap.  All that as well a trip to the liquor store to buy fine wines and spirits.  I didn't want to get caught shorthanded and seem like a rube.  But when it was all done, my domicile looked like an artist's retreat once again.

My friend wouldn't stop complimenting me on how charming house was.  I had bought thirty five dollars worth of candles to help it smell charming, too.  But I didn't get flowers which would have been finishing with a flourish.  It has been so long since I bought flowers, though, I just didn't think of it.  Selavy.

We ate outside on the deck even though it was wet.  But the rain had ended, so I dried off the table and the chairs.  She is a southern girl and prefers to eat al fresco just like me.  That should be "I" not "me," but you know. . . writing in the vernacular and all. . . .

When we finished, we moved back into the house to sit in the t.v. room because she loved the Essex green of the walls and the lamplight, the leather and fabrics, and, of course, the bookshelves.  She loved the books and the eclectic paraphernalia scattered about.  We spoke of the factory and of the people there, and then we spoke of the troubles of our times.  And of course, the conversation turned to politics.  Our ideals are pretty similar, but she, like the other kids from our factory crowd, is pretty progressive.  We spoke about the beautiful Obama years and how poorly things had gone for Hapless Biden.  We lamented the lack of a democrat who might win the next election.  Then she said that she wanted AOC to run.  This was where we parted ways.

"She is too partisan.  She is unable to compromise.  She alienates and activates her opponents.  She drives conservative dems to the other side."

Oh. . . my friend's grad degree is in Political Science.  I was walking into a mine field.  But we let that talk fall by the wayside and got more to drink and spoke of other things.

Early enough, she said she had to get back to the hotel.  There is one more day of conference and she had to get up early.  We hugged it out and reconfirmed our love and I walked her to her car.  And just like that, the visit was over.

I walked back into my clean and lovely home that now smelled like lavender and poured another drink.  My wine rack was replenished and the "library" liquor cabinet was restocked.  I would unwind for a bit and in a little while turn in.

I like that picture.  I cooked it up the other day, though it is years old now.  It is the present past, that inescapable thing with which we live regardless of our desire.

What was the fucking line?  If I could only think who wrote it.

"What do you think?"

The present past, you see, is not always well remembered.