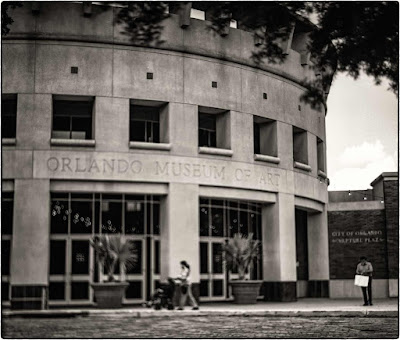 I took four photographs with the Liberator this week.  I could use two of them.  Even this one, which was a mistake. I thought I had labelled my film holders so that I knew what kind of film was in each of them. . . but I hadn't, I guess.  This was a piece of color film that I mistakenly developed in black and white chemistry.  Still, it works, probably better than it would have in color.  So even with mistakes, I batted .500.   If I shot thirty-six frames of 35mm, I would never use eighteen of them.  Maybe the Liberator should be rebranded "The Deliberator."

I guess you could say in some sense my photo of the now infamous museum is a fake.
I am grumpy this morning.  I realize that I have been grumpy for some time.  Q called late last night after I was in my cups and I ended up arguing with him.  I love to argue.  There is no doubting that.  It is simply intellectual play.  So last night when I was screaming over Q's screaming, I told him he was a moron and didn't know the meaning of the words he was using.  "Temerity" was in question.  Oh, man, I let him have it over that one.  Of course he typed it into his computer.  Good.  Now I had the fucker.
Oops.  I was wrong.
So much for intellectual gaming.
That is when I realized that maybe it wasn't other people who had lost their senses of humor.  I probably had that wrong.  It is probably the other way 'round.
I cried uncontrollably last night watching a show where Billy the Kid's mother died.  Something bad is wrong.
This morning, my body hurt so badly I could barely get out of bed.  "I should have died in the accident," I heard my internal voice proclaiming.  Most days, I think that is true.  Statistically, I should have.  Ah. . . but I was tough.  So they say.
I'm not feeling so tough any more.  Everything is broken.  I hate it.
But it is more than that.  I don't want to be old.  I've already noticed the way people speak to me is becoming different.  You'll recognize the tone when you get there.  It is the same one you used when talking to old people, the one that usurps authority.
"Oh, he was quite something 'in the day.'"
I'll end up throwing rocks at cars passing by my house one day.  If I have the energy.  If I have the arm.
There is a reason people go to live at The Villages, I guess.
I've watched enough of those nature shows to know.  You've seen them plenty of times, the ones about the gorillas.  There is a big macho silverback, and he lauds it over the others with that cocky head shake and the back of his hand.  There is no feminism in the tribe, no choice.  He mates with whichever females he chooses, and they are attracted by his power and social status.  If there is such a thing as wanting in the great apes, they want to have his offspring.  So the documentary follows the clan over a number of years.  And one day, the silverback is challenged by a younger gorilla.  He beats him down the first time, but not the last.  Eventually the younger ape wins and takes the older silveback's place and all the other gorillas come to him to pay tribute.  Cut to the old silver back.  There is no cocky head shake now, no strut, no show.  In every way, he looks defeated, and he takes his place on the perimeter of things.  His short reign is over.  It didn't last too long.
So yea.  I'm grumpy.  I need to move to the desert.  This southern humidity is killing me.
Q invited me to go to Burning Man with him and his son next month.  I don't think I could do it.  He says I need to go someplace, take a trip.  That is what everybody tells me.  Anymore, though, I hardly see the point.
I have a few hours this morning before the afternoon showers begin.  So they say.  I need to take my big cameras out and make some pictures.  Need?  Why?  What the hell?  Another building?  Another tree?  A garbage dumpster?
Probably.
I'm in a lousy mood.  If I remember correctly, though, it could be the tropical summer that is making me cranky, the time of year when nature overtakes human endeavor.  Nature may not be evil, but it is not benign.  As a young hippie zoologist, I was for it.  Nature, that is.  As an old, retired factory worker, however, I think I am against it.
It is no wonder so many are in love with the supernatural.
Posted by cafe selavy at 9:02 AM