I'll Spare You the Details 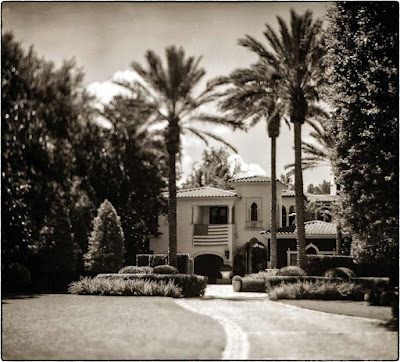 I won't go into all the technical stuff about this photograph.  It is complicated, and for me, it is cool.  I realize, though, that a picture is simply a picture, and people either like it or they don't.  Recounting the machinations of it will probably not make them like it more.  Maybe some.  But when I was at the museum with my friend, she said she liked a painting that I had no interest in.

She was quiet for a while.  Then she said, "I don't know.  You just either like a picture or you don't.  I can't put it into words."

And that's what makes a horse race.

What does?  Oh. . . one might say a difference of opinion.  Another might say "money."  Everything goes to market, etc.

Maybe I'll hire myself out as a real estate photographer.

I took this one on the 4th of July, hence the flag.  I had to "trespass" on the property to get this picture.  Maybe I'm safe.  They don't put up "No Trespassing" signs in my little town.  I doubt if they get a lot of kids selling band candy walking up the long drive.

Whatever happened to the door to door sales people anyway.  If you want to see a great movie about one, try this (link).  I wouldn't kid you.  It is great.

I've quit sending silly shit around to people in the morning.  I don't do it in the afternoon or evening, either.  I decided to let them be.  I've pretty much quit sending the daily cocktail photo, too.  Once in a while, but hardly ever.  Something is happening to people that I don't understand.  I do and I don't.  People are becoming incrementally more conservative.  I guess that it is a natural reaction to the crises we are confronted with daily.  Perhaps it is money, the money people are making, the money they are spending, the money they think they should be making. . . I don't really know.  I don't think people laugh as freely as they did a few years ago.  Maybe they are afraid to get called out.  Maybe they are just angry.  All told, though, it seems that laughing at the outrageous has given way to outrage.

I would know more if I interacted with more social media.  Every time someone sends me a twitter feed, I get blocked when I try to open it and told I need to join.  I don't think I need to join.  Instagram, however, is not a problem.  Except it is.  I look at the feeds from old loves from time to time.  They all sound to me like they read nothing but pop psychology self-help books and watch nothing but Oprah and Dr. Phil (are those even shows still?).  I want to tell them to stop it, that they sound silly, but who the fuck am I?  They have a billion "followers."  I make photos of other people's houses and write desultory missives about the state of me.

But as an old friend used to say, "I don't have to be in the right to criticize."

It may simply be their attempt to be happy that pisses me off.  Especially if they act happy.  Oooo. . . that really burns me up.  What right do they have to be happy?

Whew.  That all to say that I quit sending stupid shit to people as I read the morning news and mail.

I had an idea to tell you a story this morning, but I will save it.  I want to make some more pictures today.  God, my kingdom for a portrait.  I may never have the courage to ask someone again.  But I've loaded some X-Ray film into some 4x5 holders and want to try it on a face.  I would be using my darkroom tent for the first time when I develop the film in trays.  I can do that under a red light and watch the film develop since it is only sensitive to blue and green light.  I am wondering, though, if it is sensitive to UVA rays, the ones given off by black lights.  I want to experiment and see.  But first, I'll do it straight.

I've looked back recently and found that most blogs stopped in or around 2015.  It would be interesting to find out why.  Why then?  What happened that caused the sudden die off?  Was it a meteor or climate change?  Somehow, I've outlived them.

Ha!  If you call this living.  I feel more like Don Johnson in "A Boy and His Dog" (link).