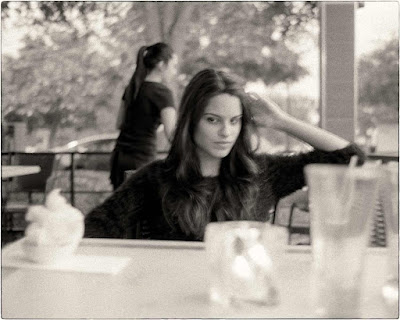 I want to live that way.

There is something to be said about the casual life, one where you just live and don't worry about everything all the time.  I think it is called "childhood."  It was more fun.  Maybe I'm going through that second childhood.  I mean  that Whopper made me happy.  All I had to do to beat the blues was just not care.  There are a lot of people who live long, healthy lives not caring.  Maybe it takes not knowing, too.  Therein lies my problem.  I mean, Christ people, I knew what phenol was.  I'm not bragging, I'm just saying.  No. . . I'm bragging.  Still. . . it is not easy being Mr. Knowitall.

So this morning when I woke up, I wondered what I would do, a brow furrowed kind of wondering.  There was this internal demand that said I must use my time.  I would need to do something productive.  It felt stressful.

Then I told myself I didn't need to do anything at all.  Not a goddamned thing.  I could do whatever I wanted or not do what I wanted.  It didn't matter.  And suddenly, I felt better.  I have been stressing, I think, since losing the structure of my old life.  My job rarely stressed me out.  I enjoyed it by and large.  It scaffolded my life, so to speak, in that it lent a definite structure.  Living in a structureless miasma has been daunting.

Until now.  As soon as I give myself over to it--Boom!

Everything I've done in life has eventually turned out to be shit anyway in one way or another.  I mean, I built no empire.  I did a lot of things that nobody is really interested in or even believes.  Telling it sounds like exaggerated bragging.

"I was alone in the jungle with Amazon natives puking and shitting, afraid I had contracted typhoid.  I slept in a makeshift lean-to in someone else's hammock.  All I had to drink was Cuzcanea beer."

"We were at 17,000 feet on a crumbly glacier when the whiteout descended.  You could see nothing but the flash of lightning that occasionally surrounded us."

People will listen to the whiney stories of domestic defeat more readily.  They can relate to those cautionary tales.  They will enjoy and even believe in the hyperbolic telling of horrific events and dastardly lovers.

Which reminds me that today is an old girlfriend's birthday.  I think.  No matter what, I am always wobbly on this detail.

I do have duties to fulfill, however.  I will need to get some groceries for a celebration of the 4th with my mother.  It stresses me out a little, but I'll deal.

I've discovered that if I tear my living room apart, I can use it for a studio.  I like my living room.  It is pretty.  But what if I just gave it up for a month or maybe two?  What if I just set up a photo studio there?  Who is there to complain?  My mother?  She rarely comes over any longer.  I don't know.  It's a thought.

I had another thought last night, too.  What if I bought the camera I really want?  It is very expensive.  But what if I did?  I have things I could sell to mitigate some of the cost.  I'd have to give up a lot of things.  I could sell all my large format camera equipment and some of my Leicas.  I could sell a couple medium format cameras, too.

But if I did all that, I'd resent the new camera, I'm sure.  It would never make me happy.

I'm a dope if I think that will make me happier or if I believe it will make me a good photographer.  But you know, it was sure fun eating that Whopper, if you know what I mean.

Maybe I'll buy a juicer today.  Apples, beets, celery, ginger, cayenne pepper, turmeric, black pepper. . . .  That would be the way to start the day.  That would surely put a little pep in my step, a little steam in my strut, a little glide in my stride.

Hell, the world is full of maybes.  What else have we to battle the uncertainties?